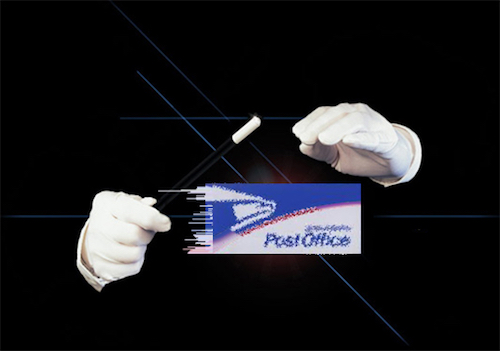 In July 2011, as a cost cutting measure, the U.S. Postal Service put together a list of 3,700 post offices that it wanted to close.

Like most organizations that have faced a full frontal assault by online automation and technology, the USPS has been working its way through a very uncomfortable transition.  They have no clear picture of what the service will look like 10 years from now.

Over the past five years alone, mail volume has fallen more than 20%, and revenue has declined 12%. According to the Cato Institute, a decade ago sorting 35,000 letters an hour required 70 employees. Today, only it takes two.

So rather than doing a piece meal approach to cutting hours and closing post offices, a better approach may be to simply close all 32,000 of them. With this approach they would still perform the service, but eliminate their physical presence. This is what I refer to as “going invisible.” Let me explain.

First a Bit of History

In 1775 the Second Continental Congress made the decision to form a nation-wide postal delivery service and appointed Ben Franklin as the first Postmaster General. In 1792 it was elevated to a cabinet-level position.

The organization transitioned into its current form in 1971 under the Nixon-era Postal Reorganization Act.

Even with its declining base of employment, the USPS still employs over 574,000 workers and delivers 177 billion pieces of mail annually. It also operates the largest civilian vehicle fleet in the world with just over 218,000 vehicles.

The USPS is in the business of selling postage. Even though it provides a number of other services, the vast majority of its revenue streams come from the sale of postage.

In a normal free enterprise business, postal rates would rise and fall according to market demand to stay competitive and remain profitable.

In its current status of being a quasi-governmental agency, the organization has been given monopoly access to all residential mailboxes, but virtually none of the authority it needs to make it function as a business.

As New York Times columnist Joe Nocera recently argued, “the problem is that neither the management nor the workers really control the Postal Service. Even though the post office has been self-financed since the 1980s, it remains shackled by Congress, which simply can’t bring itself to allow the service to make its own decisions.”

Regardless of whether the USPS moves more towards a private or public entity, and good arguments can be made for both, its days of functioning as a headless, decisionless money pit are numbered.

Delivery of First Class mail, which USPS has a legal monopoly on, peaked in 2001 and has declined 29% from 1998 to 2008, due primarily to the increasing use of email and other forms of online correspondence and business transactions.

FedEx and United Parcel Service (UPS) directly compete with USPS in the areas of express mail and package delivery services. However, both companies have transit agreements with USPS in which an item can be dropped off with either FedEx or UPS who will then provide shipment up to the destination post office, serving the intended recipient, where it will be transferred for delivery to the U.S. Mail destination, including PO Boxes.

While email may have lowered the volume of First Class mail, online retail has increased delivery volumes in areas where customers would have previously purchased items from local retailers. Approximately 40% of postal revenue today comes from online purchases or private retail partners like Wal-Mart, Staples, Office Depot, Walgreens, Sam’s, Costco, and grocery stores.

Just as mail volume has dropped, foot traffic into local post offices has also plummeted. Once a focal point of community activity, people’s need to actually walk into a post office has been replaced with automated postal machines, online stamp sellers, contract postal units, and more.

Virtually everything that required a person to walk into a post office in the past either has or will be replaced by an automated machine, drop-off box, or remote service option in the near future.

By eliminating its customer facing-retail storefronts, where transaction costs are high and customer service is painful, the USPS can focus on what it does best, pickup and delivery.

As they makes this transition, they can also offload virtually all of its high dollar real estate where maintenance, upkeep, and parking are at a premium, and replace it with less onerous industrial space in cheaper, less-trafficked areas of the community.

In much the same way homeowners cover the costs for specialty trash containers that match the semi-automated trash trucks on the road today, homeowners could easily be required to install next-generation mailboxes designed to work with automated postal pickup and delivery machines.

As we enter the era of driverless cars, a similar effort will focus on developing driverless delivery vehicles with automated mail delivery being the holy grails in this emerging industry.

In the late 1990s, I spent time working with David Porter, an ingenious inventor based in Kansas City who had developed and patented an automated delivery box he called SmartBox. As you can see from the photos, a delivery box like this can come in a variety of shapes and sizes, including something as subtle as a park bench with secured containers below the seat.

After spending several years trying to get industry leaders to take notice, David finally moved on to other ventures, resigning himself to the fact that he was a couple decades ahead of his time. However, given the chance, entrepreneurs are ready and eager to help delivery services adapt to the ever changing marketplace that our future holds.

The reason communities are fighting so hard to keep their post offices open is because they, as a community, are being singled out as “less important.” This never bodes well for political candidates who generally bear the brunt of this kind of regional complaint.

However, if all post offices were closed, it would be far more acceptable because everyone would be treated equally.

We will always need a system for delivering items. But is it better to deliver these items to a physical address or to us personally?

The average person in the US will move 16 times over the course of their lifetime, roughly once every five years. In any given year, approximately 20% of the population will change the place they call home.

While it is true that in some cases we want things delivered to a business at a specific location, such as parts for a manufacturing plant or books for a school, our current systems don’t allow for the separation of individuals and locations.

So, is it possible to create a technology for the U.S. Postal Service, FedEx, and UPS that will enable them to switch from static location-based addresses to dynamic, ever-changing personal addresses?

The starting and ending nodes of our connected world are often major disconnects. The efficiencies we have come to expect in the online world simply doesn’t translate well into our current systems in the off-line world.

So where do we go from here? What are the systems we need to create to solve these problems? Rest assured, the answer to these questions may very well be a critical new system that redefines our future.

← Inventing the Future Will Future Mobility Lead to Future Instability? →