Micro-jobs and the emerging underground economy 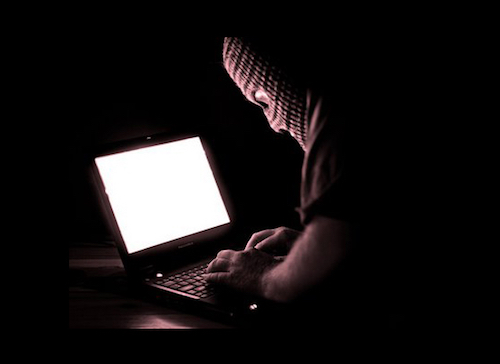 For them, it becomes painfully obvious that their lackluster effort to find a job, which often involves playing video games and watching TV interspersed with sending an occasional resume or phone call, has left them with few options as the end of their financial rope draws ever closer.

Panic begins to set in.

Human to human social skills are vastly different than online social skills and their ability to interact with others has atrophied to a point where their entire circle of friends consists of a few relatives and some high school classmates who have somehow turned beer drinking into a profession.

They have already been suckered into several network marketing get-rich-quick schemes and looked at going back to college but couldn’t see a quick enough payback. With few options left, they find themselves slipping into survival mode.

Welcome to the underground economy.

There are no good numbers to describe the size and characteristics of the underground economy, but it is most certainly growing.

From the government’s standpoint, when there’s no crisis, no one worries about it. However, as national debt skyrockets and an even more troubling international debt crisis looms, the declining balance sheet causes many to go into finger-pointing mode.

A recent article in the London-based Financial Times took a close look at this growing problem.

Pietro Reichlin is an economics professor at Rome’s Luiss University who has studied the underground economy (sometimes refered to as the “black” economy) extensively.

“When wages go down, there is more incentive to move towards the black economy. It is almost a form of insurance, a way out,” says Reichlin.

Europe’s shift towards an underground economy is happening far faster than in the U.S.

According to Friedrich Schneider, economics professor at Johannes Kepler University in Linz, Austria, the size of the Spanish black economy is equivalent to 19.2 per cent of official gross domestic product. That happens to be the same proportion as the average he calculates for 31 European countries, with Bulgaria the highest at 32.6 per cent and Switzerland the lowest at 8.1 per cent. 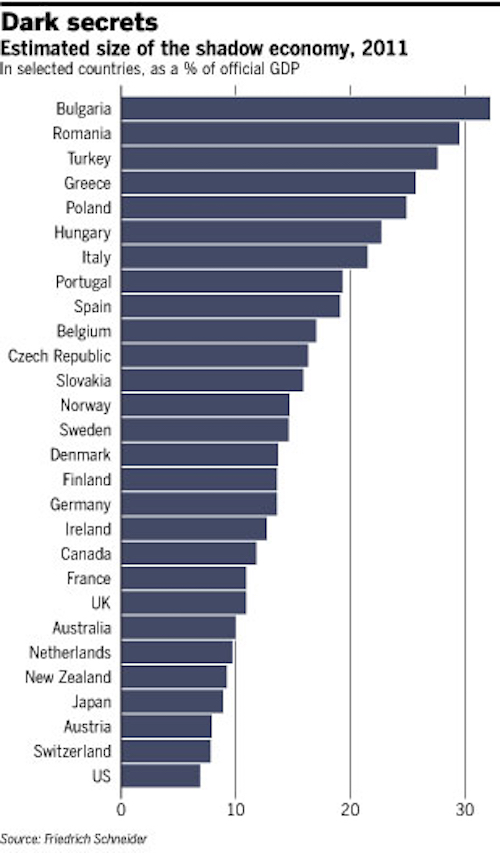 Schneider estimates the size of the underground economy in the U.S. is in the range of 7%. But that 7% represents a far greater dollar amount than most of the other counties combined.

“Among the main causes of the black economy is the level of taxation. The higher the tax and the regulatory burden the bigger the shadow economy of the country,” Prof Reichlin says.

Business is becoming very fluid in how it operates, and the driving force behind this liquefaction is a digital network that connects business or personal needs with solution providers, and buyers with sellers, faster and more efficiently than ever in the past.

But the effect of our flowing digital business world does not stop with how transactions are performed. Instead, it has begun to morph and change virtually every aspect of how business is conducted including the duration and permanency of work assignments, the employer-worker relationship, and the organizing principals around which work assignments and talent coalesce.

At the center of the underground economy is a set of tools that makes working from home or a local coffee shop far easier than finding a job.

Here are a few examples of unusual home-based and personal enterprise businesses:

According to the U.S. Bureau of Labor Statistics, the number of home-based businesses in the U.S. exceeds 18.3 million businesses.

Although difficult to track, it is estimated that nearly 70% of home-based businesses succeed for at least a three-year period (compared to 29% outside the home business ventures). The higher success rate is due to the ability for home-businesses to be operated part-time around a day job.

These types of enterprises lend themselves well to an off-the-books underground operation.

If there’s one thing you can learn from Timothy Ferriss and his book The 4-Hour Work Week, it’s the value of outsourcing. You can gain all sorts of time and freedom by getting someone else to do the work.

But what about from the worker standpoint? Will it always be a competition to see who can underbid whom?

Micro jobs are short-term tasks that create an opening. They can either be the starting point for a longer work relationship or just one in a series of one-off projects to bring in a little income.

As most employers know, the quality of the work is far more important than the price paid for it. So while many will experiment with low-cost workers, a longer-term relationship with someone who is a consistent performer is far more valuable.

Micro job sites like Ffiver, Dollar3, MyntMarket, GigHour, and 7Freelance do a good job of connecting talent with the needs of business. But building a long-term relationship is highly dependent on the individual. 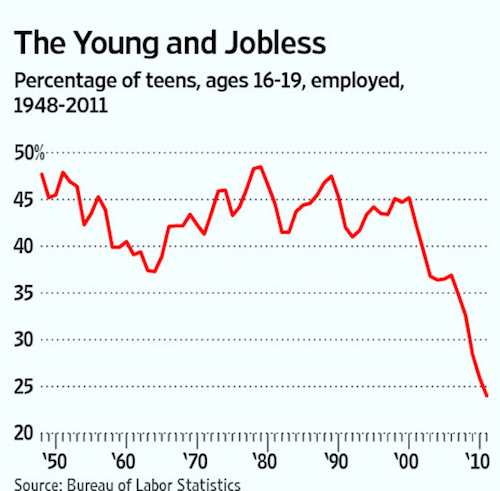 “Perhaps you’ve already noticed around the neighborhood, but this is a rotten summer for young Americans to find a job. The Department of Labor reported last week that a smaller share of 16-19 year-olds are working than at anytime since records began to be kept in 1948.

Only 24% of teens, one in four, have jobs, compared to 42% as recently as the summer of 2001. The nearby chart chronicles the teen employment percentage over time, including the notable plunge in the last decade. So instead of learning valuable job skills—getting out of bed before noon, showing up on time, being courteous to customers, operating a cash register or fork lift—millions of kids will spend the summer playing computer games or hanging out.”

As young people try to enter the job market at an older age, they will have already gained some awareness of the advantages afforded by the underground economy.

The U.S. government has become growingly inept in their ability to work with the emerging digital economy in the midst of the global financial problems.

The number of miscues and disconnects are all but guaranteeing the size of the underground economy will grow.

Is this a bad thing? It depends on which side of the fence you’re on.