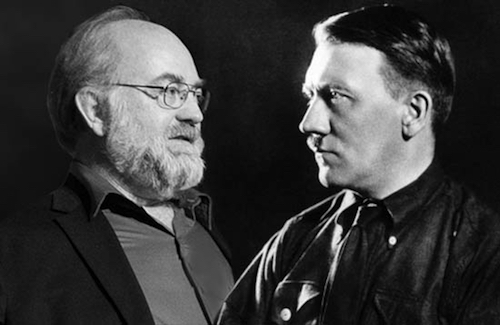 No, it wasn’t exactly what I had planned.

The year is 2026, and what began as a simple quiet evening at my local library, culminated with me coming face to face with one of the most reviled men in all history.

As I entered the library, I caught a glimpse of a new room they had just completed with a labeling above the door that read, “Conversations Room.”

Naturally curious, I asked one of the librarians about it, and she quickly explained how they had just installed a “virtual presence” machine and it would enable anyone to have a “live” conversation with famous people throughout history.

That brief explanation was all it took. In about two seconds I had totally forgotten the reason I came to the library, took my seat, and started tinkering with the controls to figure out how it worked.

No, Hitler wasn’t my first choice, or even my last choice, but after hitting a few wrong clicks, he showed up as an option so I decided to give it a go.

After a few technical flickers, he suddenly appeared, and I was taken back by how real he looked and how authentic it felt. He came from the back of the room, walking rather stiffly, took a seat, and began fiddling with one of his shoes.

I introduced myself with a short, “Hi, I’m Thomas Frey,” and he immediately sat up and gave me a piercing stare.

“Why are you here?” was his response. It was in English but with a German accent.

I was momentarily stunned with the question and fumbled my words trying to come up with the right response. “I-I-I’ve been doing research on WWII and came here to meet you,” was all I could muster.

He continued gruffly, “There’s been several attempts on my life and I’m not sure who I can trust. Who do you report to?”

His paranoia was palpable, but it was his authoritative stare and commanding presence that demanded my full attention. I suddenly got a sense of what it was like being one of his commanders and having to answer to this intensely imposing figure.

In retrospect, I was terribly unprepared for this conversation. I had mistakenly assumed I’d be the one asking the questions, but even as a three-dimensional avatar, this was someone who very much needed to be in control.

It took me about 45 minutes to gain his trust. I didn’t realize it would be this hard.

At one point I asked a flippant question, “Why are you so worried about who you can trust, you’ve been dead for over 70 years?”

He leaned forward and started screaming, “If I am so dead, how is it that I’m sitting here in front of you answering stupid [expletive] questions about things I don’t give a [expletive] about?

The tone of his voice sent shivers up my spine. After taking a deep breath and watching the trembling veins in his face subside, I decided I never wanted to do that again.

I was pretty sure he didn’t have the ability to order soldiers to come to my home, but I was becoming less certain of that as the conversation proceeded.

What had started off as something I thought would be a rather lame casual conversation with a historical figure had suddenly become one of the most intense experiences in my entire life.

Resorting to a few softball questions, I asked him what it was like growing up in Germany.

He added a bit of personal history. “My papa was a farmer and we raised bees. I had two older brothers and an older sister, but they all died as young children. I was the first one to make it past the age of three.”

He continued, “As a child, I wanted to become a artist and attend art school. But my papa insisted I go to Realschule, a technical school where I could become an apprentice and earn a living. I hated him for this. Art was very important to me and I’ve spent countless hours drawing cartoons and creating art throughout my life.”

Eventually I began asking him about Germany’s progress in making nuclear weapons. I had heard they were close, but I thought he could add a bit more detail.

After fidgeting for a couple seconds, clearly uneasy about revealing too much, he began giving me the names of people and details about some of their top-secret research.

When I asked him about his dislike of the Jews, he became visibly agitated, filling the room with German swearwords. “When my younger brother died of measles, it was a Jewish doctor who failed to cure him. When my mother became ill, it was more Jewish doctors that let her die.”

Now he was on a rant. “They were the ones who causes us to lose WWI. They controlled all the banks, the factories, and the stores. And we lost because they thought the war was costing us too much money.”

His anti-Jew diatribe continued for another 10 minutes.

The entire discussion lasted 90 minutes, far longer than I had anticipated.

After saying goodbye, I began to grasp how stressful the call had been. My shoulders were tense, I was sweating profusely, and I realized I had even been clenching my jaw and grinding my teeth.

I hadn’t been a fan of Hitler before the call and was even less of one now. But in many ways, everything made much more sense. I understood how an imposing figure like this could rise to power and some of the underlying creepiness of why he did the things he did.

Reading historical accounts of his life suddenly seemed so one-dimensional.

Students who prepared for one of these encounters in the future would have far more reasons to do their homework first and be prepared for this kind of confrontation.

As it turned out, Hitler was one of the early “Conversations Room” prototypes, and a team of programmers, movie directors, gamification experts, and historians had spent countless hours stitching this character together from multiple video, audio, photo, and written fragments of information. 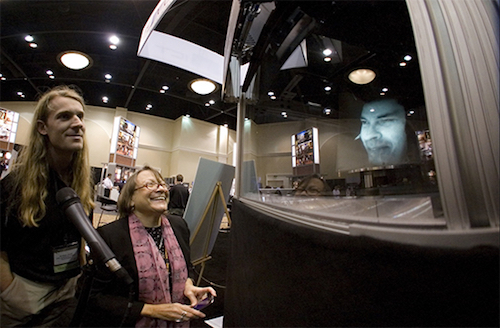 An Example of Situational Futuring

The scenario I’ve just taken you through is an example of what I call “situational futuring.” It describes a real life situation taking place with soon-to-be-invented technology, and adds both personal and emotional elements to make it feel genuine.

I could have chosen any number of different historical figures, but Hitler seemed to be the one that would most stand out in a reader’s mind.

In retrospect, it also establishes a valid reason why libraries will still exist in the future. Not only will they exist, they will become a showcase for emerging technology that will enhance both the educational and informational experience for future generations.

The path to a better future comes with an enhanced understanding of the past.

In a similar fashion, the path to a better future will come with a deeper understanding of the nuances of future life altering technologies.

Technology will redefine our cultures, our lifestyle, and our value systems. There will always be unintended consequences, and some of it will be difficult to manage, but new technologies will never stop coming.

The more we focus our attention on the future, the better we can prepare for it. It’s in everyone’s best interest to stop getting blindsided by the future.

This is just one example of an anticipatory thinking technique to help plan for tomorrow. Over the coming months I plan to featuring several more.

With this in mind, I’d love to hear your thoughts on the effectiveness of this technique. Was it captivating, realistic, a bit off the mark, or were you simply put off by the selection of Hitler? Please comment below.