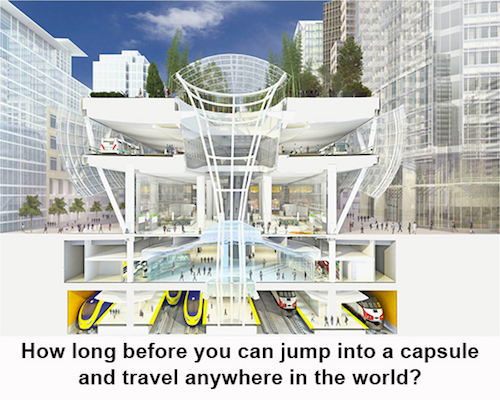 Let me begin with a couple questions.

Question #1: The U.S. has two countries that touch its borders – Canada and Mexico. But what is its third closest neighbor?

While most would probably look at the island nations in the Caribbean, the third closest is actually Russia, a scant 2.4 miles away, the distance between Alaska’s Little Diomede Island and it’s sister Big Diomede Island on the Russian side of the Bering Strait. During the winter an ice bridge usually forms between the two islands and a person can actually walk from the U.S. to Russia.

Question #2: Is it possible to drive a car from North America to South America?

The answer to this question is “no,” because plans for the highly publicized Pan-American Highway were never completed, leaving a 60 mile gap across a dense jungle region, known as the Darian Gap, between Panama and neighboring Columbia.

Both the Bering Strait and the Darian Gap will require 50-60 mile tunnels or bridging systems to connect North America with Asia and South America. And both are part of the massive disconnect in our global transportation network, a network that has been growing for centuries.

Ground transportation, however, is far different than air travel where the Montreal-based International Civil Aviation Organization (ICAO) has been working for nearly a century to create a more cohesive global air transportation network. With its ever-improving standards and operational procedures, air transportation has become far safer than anything on the ground.

That said, ground transportation is on the verge of major transformation.

Emerging technologies ranging from driverless cars and trucks, to ultra high-speed rail, and vacuum tube transportation networks are all creating an urgent need for a global solution.

Without something similar to the ICAO, it’s easy to envision three separate approaches to bridging the Bering Strait and the Darian Gap, one for roads, one for rail, and one for future tube transportation.

Rather than forcing three colossal bridge/tunnel projects to be built across environmentally sensitive areas, a single, all-inclusive approach would be far better.

For each of these current disconnects, and there are far more than the two that I’ve mentioned, it’s not a matter of “if” they will be built, but “when.” Here’s why. 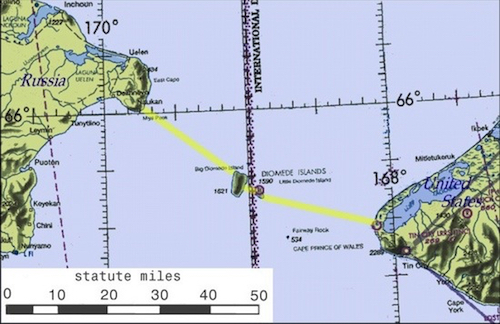 Map of the proposed route for the Bering Strait Project

History of the Bering Strait Project

Over the years numerous plans have surfaced for building either bridges or tunnels across the Bering Strait. With the Diomede Islands in the middle, it will require two 25-mile long tunnel/bridges to span the distance.

In 1892, Joseph Strauss, who would later design over 400 bridges, including the Golden Gate Bridge, pieced together the first proposal for a Bering Strait railroad bridge as part of his senior thesis for college. The proposal was eventually presented to the Russian government, but rejected.

In 2008, Vladimir Putin approved a plan for Russia to build a railroad across the Bering Strait. The plan included a 60-mile tunnel that would run under the Bering Strait between Chukotka, on the far east side of Russian and Alaska, costing an estimated $66 billion (USD).

In 2014, reports surfaced that China is considering the construction of a “China-Russia-Canada-America” railroad line that would include a 125-mile long underwater tunnel crossing the Bering Strait. Conceived as a tunnel for their bullet trains traveling at speeds of 220 mph, this train would enable passengers to travel from China to the United States in around two days.

So far, neither Russia nor China has started construction.

The Engineering Challenge of the Bering Strait Project

From an engineering standpoint, the Bering Strait is not as problematic as many might imagine.

The strait is less than 200 foot deep and tides and currents in the area are not severe. But since it’s near the Arctic Circle, the work will be subject to long dark winters and extreme weather, and construction activity would likely be restricted to 5 months of the year.

When it comes to railroads though, the Russian track width is 3.5 inches different than track in the U.S., and this will likely pose far more issues for the rail industry than building the bridge/tunnel system. 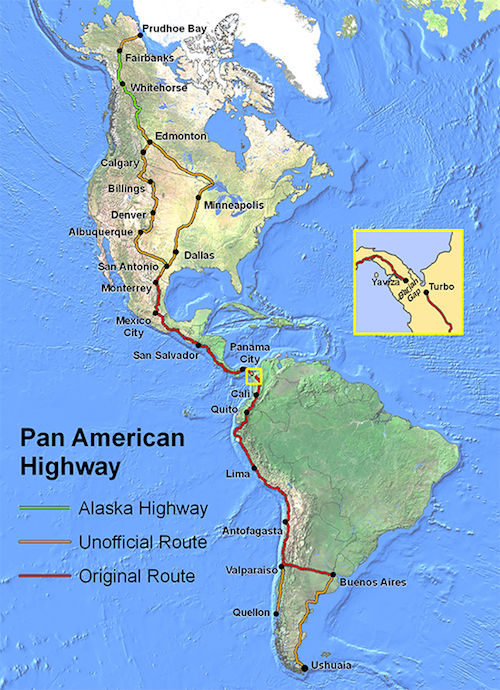 Map of the Pan-American Highway

History of the Pan-American Highway Project

Plans for the Pan-American Highway first surfaced at the Fifth International Conference of American States in 1923, where it was originally conceived as a single route. In July 1937, Bolivia, Chile, Columbia, Costa Rica, El Salvador, Guatemala, Honduras, Mexico, Nicaragua, Panama, Peru, and the U.S. signed the “Convention on the Pan-American Highway,” where they all agreed to begin construction.

Today, the Pan-American Highway exists as a network of roads measuring about 30,000 miles in total length, except for 60 miles through the rainforest area in Panama known as the Darian Gap, which consists of a 50-mile wide swamp and marshland between Panama and Columbia. 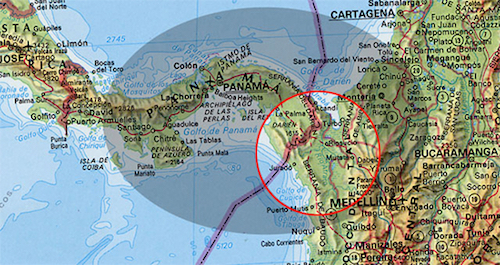 Location of the Darian Gap

Many adventurers and extreme sports enthusiasts view the gap as a challenge. People often cross it on bicycle, motorcycles, all-terrain vehicles, and on foot. But for them, dealing with jungles, swamps, insects, and other hazards makes it a treacherous journey. 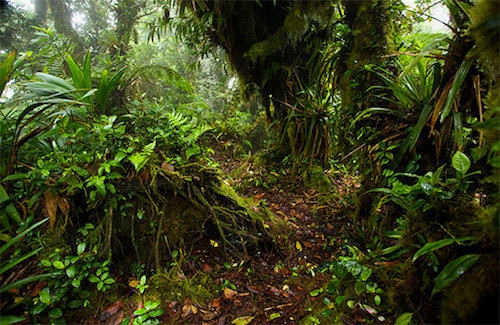 The Engineering Challenges of Crossing the Darian Gap

The Darian Gap is an environmentally sensitive area. Many people, including indigenous populations and elected officials in neighboring countries are concerned with issues like protecting the rain forest, containing the spread of tropical diseases, protecting the livelihood of local tribes, preventing drug trafficking and its associated violence, and preventing viruses like foot-and-mouth disease from entering North America.

As a result, part of the engineering challenge will be to prove the positives far outweigh the negatives. 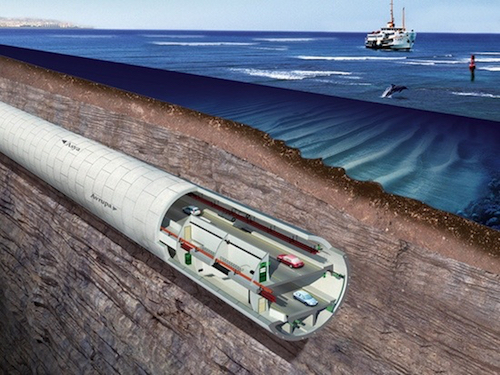 From an engineering standpoint, it would be easy to conceive of an underwater tunnel that would circumvent the Darian Gap completely, and route traffic more efficiently between Panama and Columbia. 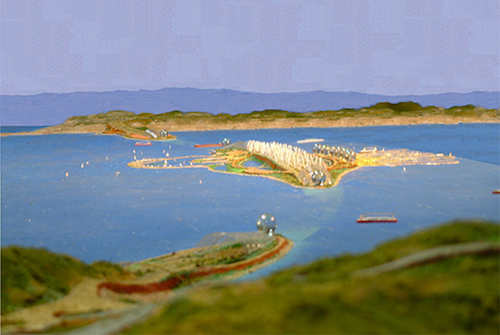 The completion of the English Channel Tunnel has breathed hope into a number of significant engineering projects around the world. Here are eight more examples of major ground transportation projects current being proposed:

1.) Gibraltar Tunnel – The proposed Gibraltar Tunnel will link Africa and Europe. Due to the depth of the Strait of Gibraltar, 1000–2950 feet, it will be a significant challenge to remove vehicle exhaust from this depth.

2.) Sweden to Finland Tunnel – A tunnel has been proposed between Sweden and Finland. While one section is over 600 feet deep, having many islands in between will make this distance reasonably easy to connect with a series of bridges.

3.) Korea to Japan – The “Korea Japan Friendship Tunnel System,” is a proposed 120 mile tunnel-bridge system to link the city of Karatsu, Japan, to the port city of Pusan, Korea via four islands.

4.) Japan to Russia – The proposed 28 mile Sakhalin-Hokkaido Tunnel will link Hokkaido to the Russian island of Sakhalin. When combined with the proposed Sakhalin Tunnel between Sakhalin and the Russian Mainland and an extension of the Baikal Amur Mainline, this will create a much needed rail link between Japan and Russia, as well as the rest of Asia.

5.) Taiwan to China – The Taiwan Strait Tunnel Project is a proposed undersea tunnel to connect Pingtan, China to Hsinchu, a city in northern Taiwan as part of the G3 Beijing–Taipei Expressway.

6.) Italy to Sicily – The Strait of Messina has busy ferry traffic and a 2-mile bridge is planned to eliminate the need for ferries. But due to local economic issues, the construction date has been postponed several times.

8.) Transatlantic Tunnel – Perhaps the most far reaching is the transatlantic tunnel, a proposed 3,100-mile mass transit tunnel that would span the Atlantic Ocean between North America and Europe. The main barriers to constructing such a tunnel are cost estimates of between $175 billion and $12 trillion.

The Argument for Going Global

The problem is that very few people are viewing our fragmented ground transportation networks as part of a larger global system. Over the coming years, global systems, involving representatives from countries all over the world will spring to life, helping to bridge the cultural barriers currently preventing mega projects like these from moving forward.

It boils down to the question of whether we are better off being a more cohesive, blended global society, or less of one. 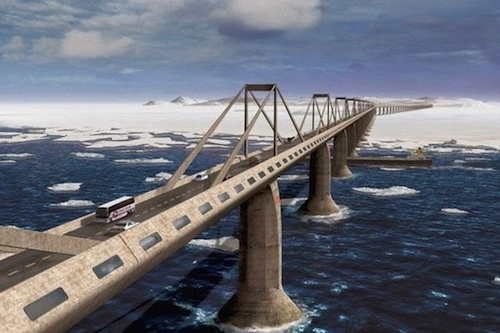 Several trends are driving our appetite for mega projects in the future.

Emerging technology and automation will make these types of projects more affordable and technically doable. This follows closely with the Laws of Exponential Capabilities in a previous column.

Increasing levels of connectedness are driving our need for efficient travel and shipping around the world.

As technological unemployment grows, countries will be looking for mega projects to reemploy future generations.

For each of the projects listed above, it’s not a matter of “if” they will be built, but “when,” with the exception of the Transatlantic Tunnel. Even the extreme futurist in me has a hard time grasping the viability of that one.