Owning Your Own Country 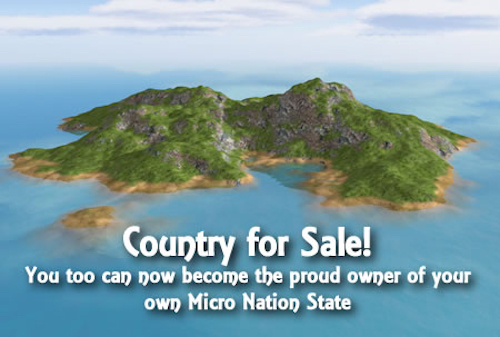 The world is in for some radical changes ahead. Hold on tight, we are in for a wild ride.

While most were trying to address issues surrounding our depressingly screwed up economy, I decided to take a rather different approach. My focus was on emerging new Power Tools for the coming years, one of which was the idea of selling islands as autonomous countries.

Dubai and the UAE are on the cutting edge of island-building technology. Their creative approach to building Palm Island along with the coming Palm Jumeirah, the Palm Jebel Ali, Palm Deira, and The World, have become an inspiration to other countries such as Bahrain, Thailand, and the Netherlands where new islands are also springing to life.

Countries in the Middle East have a distinct advantage when it comes to island-building because the Persian Gulf is a far more stable body of water than any of the major oceans.

My talk centered on the concept of building islands, and rather than selling them as real estate, to sell them as autonomous countries.

From Island Building to Nation Building

To begin with, the demand from people wanting to buy their own country will be very strong. The notion of owning a country is highly appealing, and will likely turn into a bidding war. An island country can command a far greater return on investment than selling an island as real estate. The additional value comes from the additional rights that are conveyed along with the purchase.

People who buy the island countries will be very wealthy, and there is great value in having wealthy neighbors.

The nation that sells the tiny countries, and I’m presuming it will only be nations that have the authority to sell land as independent countries, will become the host nation to all of the micro-nation states it creates. In this role, the host nation will provide many of the primary services such as power, electric, water, transportation, trash removal, etc.

Businesses that develop around the selling of services to the Micro Nation States, will likely become a significant industry.

Done correctly, each of the Micro Nation States will also get a vote in the United Nations. With the creation of enough island countries, it may become possible to influence global politics.

More importantly though, by giving up authority over these islands, host nations will find that they have greatly increased their influence globally. Any nation that becomes expert in building other nations will command the respect of the entire world.

What Exactly Is a Country?

The dictionary definition of a nation is “A part, or division, of the people of the earth, distinguished from the rest by common descent, language, or institutions; a race; a stock.”

Law professor, Pastor Ridruejo, defines a nation as an entity with a government that totally controls a stable population in a delimited territory.

In the past we have associated the concept of country with attributes such as a single geographical territory, a common people with a common language, a common government with its own currency and its own set of laws and regulations, and a series of systems that tie the country into a functional entity.

However, in this context, an island country is more about the freedom of self-rule. For each person, the freedoms associated with any self-governing country will be prioritized differently. Some will see this as a scheme to avoid taxes, while others will see it as an opportunity to build something great. But perhaps their greatest value is in their ability to experiment.

Once a new country is formed, the issue of recognition comes into play. Recognition is a primary factor in an emerging country’s credibility and often determines the stability of the new government and the role the country will play in the international arena. There are two primary forms of recognition:

1. Internal – Recognition by the people living inside that country. Since the newly formed island countries will have no indigenous populations, this becomes a non-issue.

2. External – Recognition by other countries, or people or organizations outside the country.

The Institute of international law stated in its Brussels session in 1936:

“Recognition of a new Nation is a free decision by which one or several Nations corroborate the existence on a DETERMINED TERRITORY of a human society, POLITICALLY ORGANIZED, INDEPENDENT of any other nation, capable of complying with International Law, and their decision is made public, recognizing the new Nation as a member of the International Community”.

Some European nations have taken the step of formalizing recognition standards, stating that any new nations must satisfy certain legal requirements. On Dec 16, 1991, the Foreign Affairs ministers of the European Union decided to adopt a set of criteria that new member states emerging from the old Eastern Europe and Soviet Union must satisfy in order to become officially recognized. The criteria include the following four items:

a) Respect all points of the Charter of the UN, Helsinki Summit Final Act and Charter of Paris for a New Europe.

c) Respect the unchangeable nature of national borders that can only be changed peacefully through common agreement.

d) Commitment in reaching common agreements on all matters related to State succession and regional controversies.

The Value of Proximity

When island countries are first created, they will be rather boring places to live. For this reason, soon-to-be buyers will place great value on their country’s proximity to other countries. They will be looking for Host Countries with good culture, entertainment, goods & services, talented people, low crime, and a number of other attributes.

Much of the value attributed to a country initially will be determined through a weighted checklist used to assess surrounding assets. Creating an island country close to Antarctica may seem like a good idea, but the amount people will be willing to pay will be far less than one near a well-developed topical paradise.

A country with no indigenous populations is a blank slate, and a chance to experiment and test new systems.

The operating system for the world today is comprised of a series of intertwined complex systems. Some are global in nature while others are systems specific to an individual country or region. But once created, these complex systems govern everything from operating a business to how to deal with troublemakers. These systems are firmly anchored into place with a vast body of laws which makes them increasingly difficult to change.

However, a newly formed island with no indigenous people, no existing structures, or government becomes a perfect laboratory for experimentation. Much like an artist who positions a pure white canvas onto an easel, an experimental nation state will begin, through trial and error, to craft the world’s next great masterpiece.

Many experiments will fail. But unlike the modeling being done in virtual worlds, these island countries will serve as a real world test bed for tinkering with real world systems on a small scale.

Until we unleash the power of experimentation, we have little or no sense of what our true potential actually is.
One Scenario

There are many possible scenarios for how an Experimental Nation State may be used, but let’s consider one example.

One of the first island countries that is created is purchased by Google.

It becomes the first Corporate Nation State, not governed by a dictator, Prime Minister, or President, but by a CEO with a Board of Directors, influenced by shareholders.

Google decides to use the Experimental Nation State to test out a new loan matching service designed to match the money from Middle Eastern countries with prospective borrowers around the world. They decide to set up this operation in their own country as a means of circumventing the onerous banking and lending laws in nations around the world.

While they have no intent to do anything illegal, this arrangement offers them great efficiency without having to deal with the onerous regulatory agencies.

With Google’s extensive data mining capabilities, they have the ability to know more about every person and every organization than any credit bureau ever will. This enables them to instantly match up lenders and borrowers, and optimize the loan packages for both sides in the process.

Once this process is in place, borrowers and lenders around the world begin to shift to the new Google loan system, altering financial markets in nearly every country.

Whether this scenario intrigues you or frightens you, its easy to see the enormous potential for unleashing potent new engines of innovation.

Let me begin with a question. If you could live where you are living today, do the exact same work that you’re doing today, and make the same money you’re making today, but you had the option of becoming a citizen of another country, what would be the compelling reason for you to make that decision?

This is exactly the type of question that governmental architects will be wrestling with as they consider the value proposition between a country and its people. This entrepreneurial approach to nation-building will quickly become the topic of global conversations.

Here are a few predictions:

Some countries will build new islands and sell them as countries, while others will sell either existing islands or existing tracts of land as autonomous countries.

The world is in for some radical changes ahead. Hold on tight, we are in for a wild ride.