Libraries of the Future

Libraries of the Future 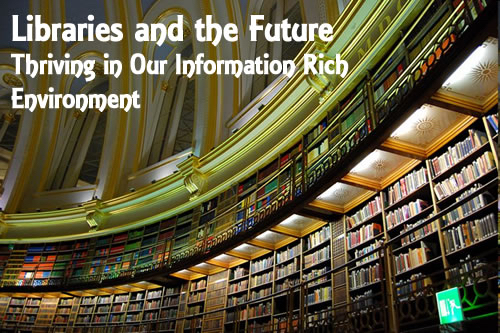 Where great ideas happen, and people have the tools to act on them

Ten years ago, many in the tech elite were predicting the demise of the public library. Little did they understand that libraries are living, breathing organisms. Much like plants that flourish with good dirt, water and sunshine, libraries have begun to thrive in our information-rich environment.

Libraries are going through an age of rebirth, with cities investing heavily in their central libraries as the crown jewel of their community. Opulent multi-story glass buildings have been erected, attracting many new categories of library users. But the question remains – Where do libraries go from here?

Key decision points include the library as a place vs. the library as a service; should library’s core mission be to serve the underprivileged, as a support for schools and educational systems, a resource for business, an information hub and gathering place for the community at large, or all of the above? Should we still focus on books as the primary information medium or will libraries in the future become entirely digital?

The good news is that libraries can become whatever a community wants them to be. The bad news is that most communities have a poor understanding of the driving forces and available options.

Done correctly as an ongoing process, organic alignment will enable libraries to shift resources, add and subtract elements, and focus on the primary needs of their people at any given moment.

The Library Experience: An experience involves a personal encountered, affecting more than one of our senses. As a way to measure relevance, people spend time rating their experiences.

How do we take words on a page, books on a shelf, or digitized bits on a memory stick and create information that has impact? Another way of asking this is, how do we create informational experiences that are entertaining, timely, pertinent, and fun, and at the same time, meaningful and relevant to our lives?

Gone are the days of libraries being nothing more than a “center of information”. Libraries now find themselves focusing on warm, inviting atmospheres, soft comfortable chairs, in-store coffee shops, and much more.

Library as a Place vs. Library as a Service: Libraries need to be both physical and virtual, but the physical location today adds a higher level of relevance to a greater number of people.

It’s important to understand the value of “place”. Libraries are a gathering place, a source of intellectual spontaneity, a safe haven for creative ideas, and are a place of solitude and support. These are just some of the features that we will have difficulty replicating online.

Business Colonies: The Internet is putting powerful business tools into the hands of individuals. Consequently the size of business units are getting smaller, to the point where many people are operating “empires of one” – one-person businesses with far reaching influence.

In the future, business colonies as groupings of small businesses, will form around specific themes (i.e. gamer colonies, video colonies, biotech colonies, etc). Colonies will develop around shared resources where expensive equipment and facilities are easily accessible, and libraries will become an essential focal point of activity.

Tools of Production: In his 2006 book The Long Tail, WIRED Magazine Editor Chris Anderson asserted, “When the tools of production are available to everyone, everyone becomes a producer.”

People are no longer satisfied with information flowing one way. They want to participate in it, add their own contributions, and take ownership of it.

To accomplish this, libraries need to expand their technical offerings into the tools of production. These tools will allow visitors to transition from readers to writers, from listeners to composers, from television watchers to television producers.

Here are some examples of new library functions:

One way to think about the library of the future is that it will be home to highly relevant information experiences, where great ideas happen, and people have the tools and facilities to act on their ideas.