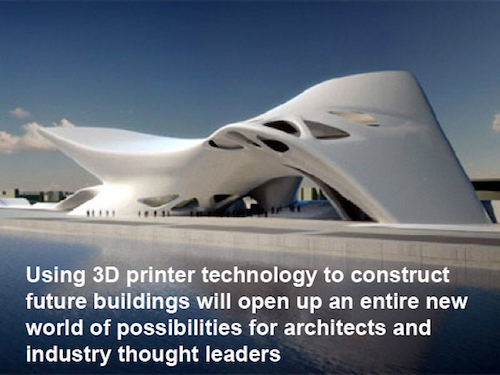 All the way back in March of 2004, working in his laboratory at the University of Southern California in San Diego, Dr. Behrokh Khoshnevis, was working with a new process he had invented called Contour Crafting to construct the world’s first 3D printed wall.

His goal was to use the technology for rapid home construction as a way to rebuild after natural disasters, like the devastating earthquakes that had recently occurred in his home country of Iran.

While we have still not seen our first “printed home” just yet, they will be coming very soon. Perhaps within a year. Commercial buildings will soon follow.

For an industry firmly entrenched in working with nails and screws, the prospects of replacing saws and hammers with giant printing machines seems frightening. But getting beyond this hesitancy lies the biggest construction boom in all history.

Here’s why I  think this will happen.

Contour Crafting is a form of 3D printing that uses robotic arms and nozzles to squeeze out layers of concrete or other materials, moving back and forth over a set path in order to fabricate a large component. It is a construction technology that has great potential for low-cost, customized buildings that are quicker to make and can therefore reduce energy and emissions.

Using a quick-setting, concrete-like material, contour crafting forms the house’s walls layer by layer until topped off by floors and ceilings that are set into place by the crane. In its current state of thinking, buildings will still require the insertion of structural components, plumbing, wiring, utilities, and even consumer devices like entertainment and audiovisual systems, as the layers are being built.

After using the technology to form simple things like walls and benches, discussions began to focus on other far-reaching opportunities like constructing rapid shelters after natural disasters, building operational structures on the moon out of moon dust, and building cheap houses for people in impoverished countries.

But those early visions were too much for an industry steeped in regulation and tradition, and the laudable ideas of helping the less fortunate will likely give way to a more mainstream approach of working with pieces before building the whole enchilada.

Breaking Through the Barriers

Starting with a mortgage industry that’s becoming increasingly wary of lending on virtually any houses, let alone something that looks radically different, coupled with city planning and zoning departments that have no way of deciding what the code should be on a “non-traditional structure,” and thousands of aging industry experts who can’t imagine building houses in any way other than we do today, we find ourselves up against a slow-moving, massively resistant building culture that will take years to overcome.

That said, this industry will have plenty of opportunity to move forward.

Early on, a number of industries will form around printed components and construction material. Printed blocks, cabinets, wall panels, toilets, and even doors will catch on quickly.

Printed artwork will begin to show up everywhere, including three dimensional “wall printings.”

A natural extension of printing new buildings will be devices that recycle the old ones. Ideally, the old material will be ground up and reformulated into new composites that can be re-printed into whatever is needed.

As an example, an old patio deck could be automatically “eaten” by some sort of PacMan device, ground up and mixed with other materials, and used to “print” a new patio deck – all within a couple hours.

By replacing our traditional techniques for pouring concrete, 3d printers could be used to print driveways, sidewalks, benches, fences, foundations, and much more.

When it comes to roofing, small bots will be used to create seamless coatings on the tops of houses. The small army of people needed to reroof a house today will be replaced with a single person who’s job is to place the bot at its initial starting point and make sure there is a consistent supply of material to coat the entire roof.

Only after gaining traction in a myriad of these component industries will we see the public warming up to entire houses being printed from the ground up.

Here are a few examples of this type of 3D printed construction projects already taking place: 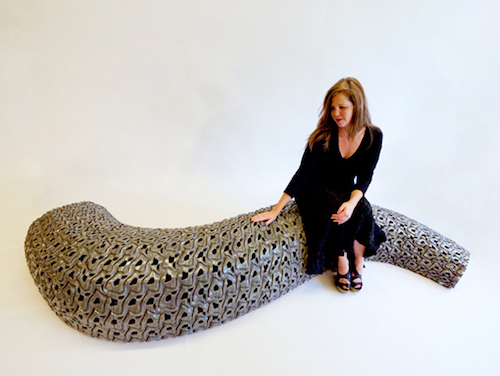 Serving both as a piece of artwork and a parkbench, there will be little resistance to this type of niche application.

An Italian inventor, Enrico Dini, chairman of the company Monolite UK Ltd, has developed a huge three-dimensional printer called D-Shape that can print entire buildings out of sand and an inorganic binder. The printer works by spraying a thin layer of sand followed by a layer of magnesium-based binder from hundreds of nozzles on its underside. The glue turns the sand to solid stone, which is built up layer-by-layer from the bottom up to form anything from a sculpture to a sandstone building.

When we rid ourselves of the constraints of flat walls and smooth surfaces, a massive new wave of options begins to appear.

If we were able to actually create a three-dimensional holographic display above our computers, like you sometimes see in movies, we wouldn’t even grasp what we could do with that because we have been entrenched into two dimensional thinking from birth, with two-dimensional tools like paper, slide rules and blackboards.

Breaking out of this 2D thinking, the questions then become things like, how do you surf the Internet three dimensionally? How do you build three-dimensional charts and graphs?

We won’t really know how to use that type of display technology until we’ve had an entire generation of kids growing up with it and learning how to use it so that it gets integrated into our thinking and dreaming on a deeper level.

Our thinking about homes today has been constrained by the materials we work with. Eight-foot sheets of drywall, wooden 2X4s, specific sizes for doors and windows, and an overwhelming desire to keep all surfaces flat, flat, flat.

However, flatness is rarely found in nature. Construction worker hate dealing with curves and unusual shapes because it complicates their lives tremendously.

Once we step away from the world of flatness, we begin to see a number of playful options that seem to come straight out of a Dr. Seuss book.

There is no doubt that a non-linear home will have its own unique challenges. Hanging pictures on a wall, installing cabinets, and even arranging furniture will all present obstacles to our present way of thinking.

But the energy and creativity that will flow from these spaces will be nothing short of breathtaking. 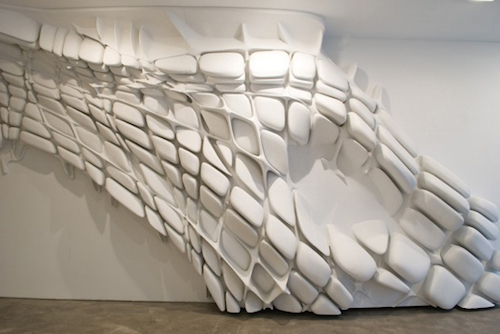 Walls will no longer need to be flat surfaces. Every wall can be designed with textures, protrusions, and artistic “surface rubble” to put an end to the dreadful uniformity in our homes today.

When printing entire buildings, there are many details that are not well understood, and that’s where the great opportunities lie. As an example:

Will your next home be a printed home?

Along with this new technology will come a number of labor-reducing and cost-saving features. The number of people needed to build a home will drop by a factor of ten, maybe more.

Over time, we may see old houses torn down with PacMan-like recycling machines, where the material is ground up, reformulated, and an entirely new house is printed in its place – all in less than one day.

All of this sounds pretty radical by today’s standards. But once we see the first homes being built this in this fashion, a new wave of change will quickly descend upon us. And even though many will lose their old jobs, the number of new jobs that get created along the way will more than replace everything we lost.