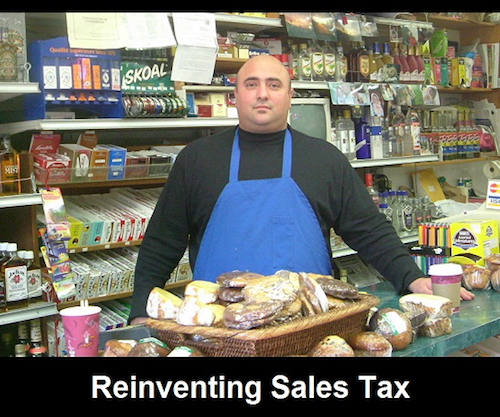 As a general rule, extreme levels of complexity take a significant toll on society. The price we pay for complexity is far greater than the money involved. With upwards of 90,000 separate taxing districts in the U.S. sales tax has become an overly complicated system deeply entrenched in the fabric of society, but woefully out of touch with the times.

As people become increasingly mobile, both on the seller and buyer side of every transaction, location-based differentiators become decreasingly relevant.

But when it comes to sales tax, here’s what everyone get’s wrong. Sales tax is not a location tax, it is a transaction tax. The transaction triggers the tax. The location just determines the amount and who the recipients will be. Without a transaction, there is no tax.

The fact that every community wants to add their own extra piece to the sales tax puzzle, requiring special forms and special rules for compliance, is what has turned it into an impossibly complicated system.

Cities and communities across the country are now in dire straits. Their programs and services were framed around the income streams of more prosperous times. Bad systems, like sales tax, get remarkably worse during a bad economy. But they also create an opportunity.

For this reason, I would like to propose a way out.

Most cities in the U.S. are funded through some form of sales tax, a system designed during an entirely different era, a system that is now on the verge of collapse.

Sale tax is paid by the buyer and collected by the seller. But many different regulations have been developed around which transactions are taxable and which ones are not.

At the heart of current debates is a 1992 landmark ruling by the Supreme Court that determined retailers are not required to collect sales tax from shoppers unless they have a physical presence in the state where customers live. Initially, this ruling applied mainly to catalog companies and home-shopping channels on TV. But it also applied to the emerging online retail industry, giving them a distinct competitive advantage, and consumers a reason to change their buying habits.

Local retailers who have invested in their community, who send their kids to local schools and volunteer for local charities, quickly found themselves competing with faceless online companies, most of whom have never set foot in town. The problem with current sales tax laws are that they create a disadvantage to those who are local. But here is where it gets complicated.

Some states now claim that anyone doing affiliate sales, placing referral ads on their blog sites and receiving a commission, can be construed as being a local sales agent, and therefore the entire transaction is subject to sales tax. As a result, companies like Amazon and Overstock who count heavily upon the no-sales-tax advantage have cancelled affiliate relationships with anyone doing affiliate sales for them in those states. 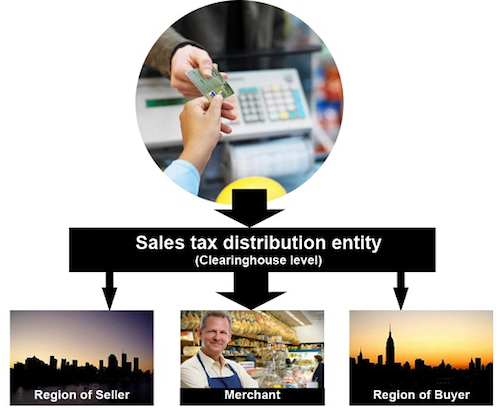 First, let’s start with the assumption that sales tax must be applied to all retail transactions – period, no exceptions. If we eliminate this one variable, then much of the complex decision-making process currently imposed on retailers is eliminated.

Second, with money becoming increasingly digital, the actual collection and distribution of sales tax will need to move up the food chain to the clearinghouse level. I will explain this idea further in the next section.

Rather than having millions of individual retailers bearing the responsibility for distributing the money, some new entity working in close proximity to our existing clearinghouses will handle the intricacies of making sure all funds are properly sent to the right districts.

The whole intent of this approach is to build a sales tax collection mechanism that is both seamless and nearly invisible to both retailers and customers alike.

In its present form, sales tax is far too messy for small-time retailers like those who set up shop at a flea market, craft show, or drive a mobile ice cream cart. Consequently, most of these tax dollars are lost.

It is also far too messy for mid-level participants like wholesalers, affiliate marketers, and subcontractors who shouldn’t even be in the mix.

The key to making this all work will be the use of split payment technology, and a new set of standards for the retail industry.

In mid-2006 I published an online article on the concept of what I termed “fractal transactions.” This concept was later republished in the Jan 2007 issue of The Futurist Magazine.

Efforts in this area were underway long before my article, but the number of companies who have announced split payment systems since then has grown dramatically, including some big-name players like Amazon and PayPal.

If, for example, all retailers were required to have a split payment system built into their point of purchase transaction machines, and once a payment was made the sales tax was automatically sent to each of the tax recipients, while at the same time the purchase price was deposited into the account of the merchant, the overall complexity of the sale process would drop significantly.

As a result, new tax-collecting retailers will spring up all across the country and sales tax receipts would jump to a whole new level.

People rarely object to paying or collecting sales tax. But when the entire process places a mental burden of brain-draining time-sucking compliance, filling out of forms, along with the chance of getting audited, it’s no wonder why so few people want to subject themselves to it.

A well-designed split payment system could eliminate all that and more. 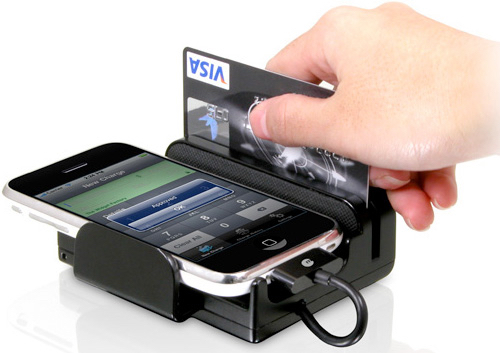 But recently a new breed of transaction devices have come out of the woodwork. Some, like The Square, Macally’s new Swipe It Reader, and Japan’s Mophie are designed to turn the iPhone into a payment device. Others, like the Verifone Vx670 or the Cardsave 7780 are standalone portable credit card machines. Some even have built-in check readers.

Portable transaction machines are becoming very accessible to retailers. This kind of technology added to the front end will eliminate the need for countless bookkeeping hours on the back end, and the overall level of complexity will drop dramatically.

Here is where it gets interesting

If sales tax were collected and distributed at the clearing house level, payments could be made to tax recipients without any of the merchants having to fill out forms or compliance documents.

To establish the location for buyers and sellers, point of purchase transaction machines will come equipped with a geo-location chip to determine the point of sale, and the zip code of the buyer or shipping address will automatically determine the other side of the equation.

Once the system is functioning well within the U.S., since more and more transactions are happening across international boundaries, it would be interesting to allow foreign countries to join in the system.

This could easily become the beginning of the first global tax system.

Above the Line, Below the Line

Traditionally, merchants have been forced to absorb all of the transaction fees, a sizable piece of the purchase price. In many cities transaction fees end up being higher than sales tax. Since these fees are hidden deep within the bowels of the transaction, few people know the full extent of the damage. But just because they’re not obvious doesn’t mean you are not paying them.

If transaction fees were listed separately and added to the purchase price with a separate line charge, similar to the sales tax, people would quickly become aware of the steep charges being assessed.

As an example, our $10 box of nails would be assessed 10% sales tax and another 5.5% in transaction fees resulting in an $11.55 final purchase price.

The only reason this is being proposed is because the number of entities involved in credit card processing, authentication, currency conversion, and gateways has grown dramatically over the years. And the amount of these fees can range significantly, with some risky transactions taking over 10% of the purchase price just for processing the credit card.

Many companies have engineered lengthy late-payment cycles to allow them to squeeze out every possible extra penny from a transaction. One of the most notorious companies playing this game is Wal-Mart, delaying payment to vendors after a sale has been complete by as much as 90-180 days.

They rationalize the time float with product return cycles as buyers can return their purchase for a full refund several months after a purchase. But whatever the rationalization, the time-float between product sale and money flowing into vendor accounts can put the vendors at a serious disadvantage.

With digital money today flowing at the speed of light, efficient payment cycles between retailers, suppliers, vendors, and tax recipients will reduce the cost of doing business.

As a country, we are competing in a global marketplace. Our ability to streamline the efficiency of our systems will weigh heavily in the future on our standing among other countries who can work faster and cheaper than we can.

As a side benefit of reinventing sales tax, we may also have the ability to collapse many of the self-serving time floats throughout the financial world with split payment technologies.

When systems change, it’s important to leverage the situation by taking a macro view of support systems to maximize the scale of opportunity.

My intent here is to stimulate discussion, not to claim all of the answers.

The accounting and bookkeeping industry thrives in the face of complexity. Each new decision point added to the tax code has been very good for the accounting business, but generally bad for the rest of the economy.

Complexity places an insidious brain-power burden on people, and this translates into a significant toll on society. While it may be unrealistic to eliminate complexity by imposing simplicity, we can at least automate it.

Our future is being shaped by our systems. We now have a golden opportunity to do something amazing, and it all begins with reinventing sales tax.