Turmoil Ahead for Housing 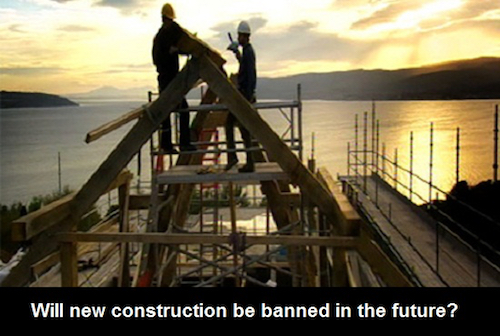 Consider the following scenario. Over the next few years, several major cities in the U.S. will begin to impose a ban on all new residential and commercial construction. With populations declining in numerous metro areas, they will worry openly about becoming the next Detroit with abandoned neighborhoods signaling a rapid decline in property values.

In the past, many cities and counties invested in open space to insure there would be room for parks and open trails in the future. Now, with property values declining and funding in short supply, a new set of concerns has taken center stage.

Abandoned properties can quickly turn into a rapidly escalating blight that moves like an infestation from one community to the next. Poorly constructed houses and office buildings will see the economics of their existence shift from a net positive to a net negative with little forewarning. When property values decline and maintenance costs increase, more and more owners will decide to cut their losses, and let their property go into default.

As a way to counteract this trend, cities will place a ban on all new open-ground construction, forcing existing buildings to be torn down before new ones can be built. So the only way someone can build a brand new home will be to tear down an existing home.

In the 60s, 70s, and 80s there was a massive effort to create affordable housing, to insure that the vast majority of people could own their own home. Financial tools were tweaked to allow the greatest possible acceptance, and construction standards were lowered to increase affordability. This combination provided a great short-term fix, but disastrous long term consequences.

Until recently, the ever growing population base provided a steady demand for houses. Even poorly built older homes in various states of decay were worth repairing and reselling because the demand kept valuations relatively high.

Real estate, like most other commodities, retains its value as long as there is sufficient demand to match the supply.

Every time there is a change in a local population, the price of real estate becomes an early warning indicator.

Unbeknownst to most, the 8,000 pound gorilla hovering in the background of our economy is the shifting population base. Any fluctuation in the number of consumers changes the demand-side of the supply and demand equation.

But a strange thing happened along the way. As doom and gloom predictions started painting scary scenarios of an overpopulated earth where food shortages threatened the very existence of humanity, the full impact of birth control technology, invented in the 1960s, began to take effect.

Today, the population in the U.S. has begun to level off, while at the same time nearly all of Europe and major parts of Asia are in serious decline. Since people create the economy, the lack of people creates just the opposite. This drop in demand will manifest itself in many areas, including a drop in the demand for real estate.

As a rule of thumb, it’s best not to view this through the value-lens of being “good or bad”; it just signals a change in the way the world works.

Simply looking at U.S. population statistics can give us a false impression of what’s actually going on. 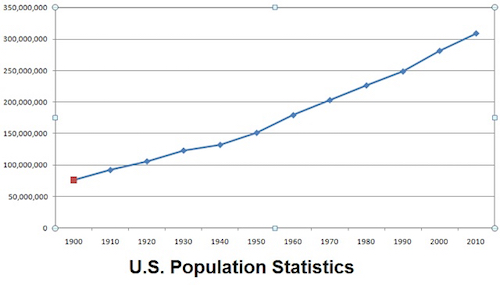 The primary reason why the population is still growing is because people are living longer. As baby boomers work their way into the retirement years, they will be shifting into more efficient lifestyles, shedding belongings, and downsizing their homes.

Another key factor in these statistics is the number of immigrants moving into the U.S. Even though the numbers are declining and there are some signs of a weakening demand, the U.S. continually attracts some of the best and the brightest from around the world.

Yes, it’s true that in 2007, more babies were born in the United States than any other year in the nation’s history. But as a percentage of the overall population it was far less than in the 50s and 60s.

To be sure, the U.S. birth rate is still higher than the birth rate in many countries in Europe and Asia where population declines are forcing the closure of schools, shuttering of factories, and a rethinking of economic strategies. 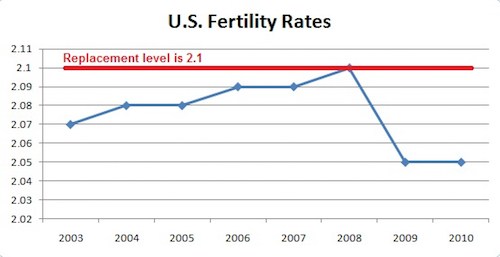 For any population to maintain its current numbers, couples need to average 2.1 children. Any number below that will yield a population decline over the long run.

According to numbers released recently by the National Center for Health Statistics, births fell 2.7 percent last year even as the population grew. 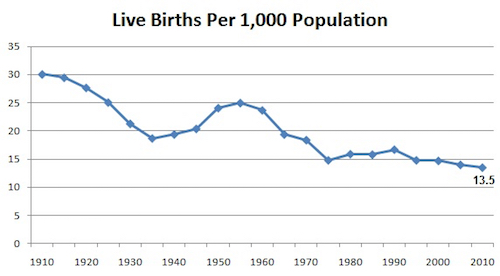 As a percentage of the population, the U.S. sunk to 13.5 birth per 1,000 population
Source: U.S. National Center for Health Statistics

The most telling statistic is the decline in live births, now at the lowest point in recorded history.

This downward trend invites some troubling comparisons to Japan and its lost decade of stagnant growth in the 1990s and very low birth rates. Births in Japan fell 2 percent in 2009 after a slight rise in 2008. 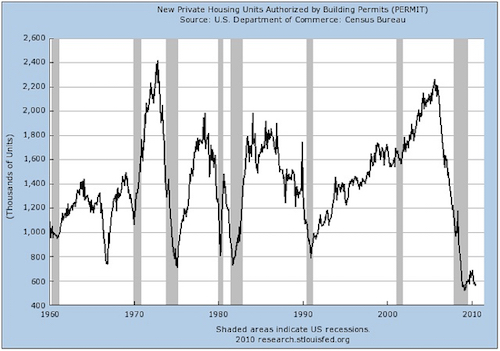 Over the past four years, the housing market has experienced a devastating meltdown.

Whether you’re looking at new or existing homes, both prices and unit volumes have declined sharply since the peak in 2006. Foreclosed homes and empty subdivisions litter the landscape. In short, the housing market is in shambles.

Perhaps one of the big trends today is a shifting mindset about owning and investing in real estate. As the number of young people declines, and loan money becomes more difficult to come by, demand for property will continue to weaken.

In addition, as the baby boomers move into retirement, there is a big shift away from the uncertainties of real estate, towards a simpler, more affordable lifestyle.

One opportunity today is for someone to devise a new approach to home ownership. With credit ratings now at an all-time low, one option may be a lease-with-an-option-to-buy arrangement where someone who leases a house for two years and makes all of their payments on time can qualify for a loan in spite of a bad credit rating.

Since young people today like the idea of being mobile with fewer ties to a particular location, the idea of loan portability may make sense, where existing loans can be applied to the purchase of a new home.

In the area of construction, we have lots of existing houses, but it tends to be the wrong kind of inventory. Our vast supply of bi-level, tri-level, and quad-level homes are a poor fit for the baby boomers who no longer like to do steps. Growing numbers of telecommuters are finding most homes don’t work well as office space. And homeschoolers are having to turn their homes into a learning environment.

Homes today are being used in vastly different ways than homes 50 years ago when they were built. And these changing lifestyles create a wide array of new opportunities for repair, retrofit, and new construction along the way.

Declining birth rates have a delayed effect. It will be many years before the full impact of these demographic changes is felt across society.

Some regional hotspots will find ways to avoid any effect altogether, while others will suffer significantly from stagnation and deflation as the population declines.

Big challenges create big opportunities. The people who can best assess the impact will be well poised to find the opportunities.