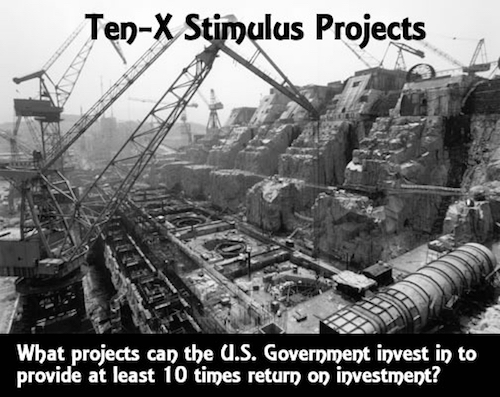 As we begin the process of thinking through the places where we can insert the electrodes and shock new life into the global economy, I would propose a new way of reviewing proposals, allowing the best of the best to rise to the top. I propose we only consider projects that can provide at least a 10X rate of return on our investment dollars.

As most taxpayers who are watching this process unfold, the idea of borrowing today against future revenue streams becomes a contentious issue with severe implications for almost everyone. If we invest the money poorly, there will be no revenue streams in the future to pay the money back, a scenario that will not end well.

However, if the money is invested into some truly remarkable developments with the ability to not only jumpstart the economy but also pay handsome dividends in the future, we will have created a win-win situation that everyone will benefit from.

So what are these 10X projects and how do we decide if they have the explosive potential needed for the situation we find ourselves in today?

If we apply the 10X ROI test to the ideas being proposed, it’s easy to see why some will be a bad investment.

The Bar Has Been Raised

In the past, money spent on a national power grid, interstate highways, railroads, GPS satellites, and the space race worked well as a way to stimulate innovation and build a solid platform on which new forms of business could be conducted. But times have changed, and we have raised the bar substantially.

The primary benefit from these systems happened early on in their lifecycle, so doing more of the same, such as building more highways and railroads, will yield only marginal benefits unless they offer some unusual breakthrough.

Additionally, low paying make-work jobs are not very exciting. We are looking for something that will challenge us, something risky, where the accomplishments are both inspirational and motivating. 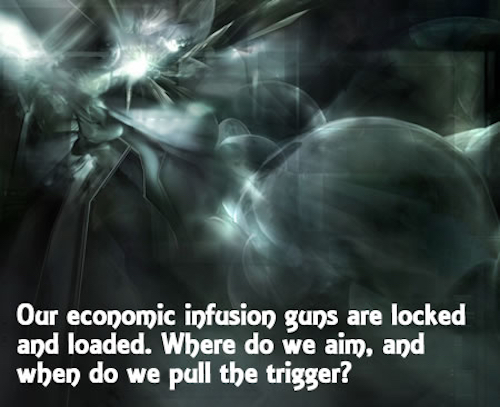 It’s a delicate balance to decide the relationship between government and private industry, especially when a governmental program has the potential for putting some existing businesses out of business. Yet tough decisions need to be made. Here are a few new projects that I believe have the potential for providing a 10X rate of return.

This list just touches on a few options. There are many more.

My goal in writing this was to give you some examples of unique projects with the capability of radically stimulating the economy.

The projects I’ve proposed are designed to stimulate thinking and challenge current thinking. We can either solve today’s problems or try to advance society. For the best rate of return on stimulus money, I will argue that it is best to spend it on advancing society.

But, it all a mater of perspective.

While most people subscribe to the notion that we live on a very over-populated planet, I believe the opposite is true, that we live in a very under-populated universe. And we don’t ever get to the point of colonizing other planets by only focusing on our existing problems and making it very comfortable to live here on earth.

We need to advance society, and this advancement begins with novel thinking, taking risks, and pushing ourselves harder than we’ve ever been pushed before.