The Future of Nanotechnology – My Upcoming Book 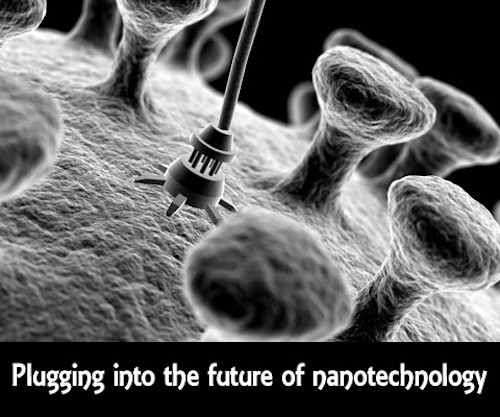 Nanotechnology is a science riddled with paradoxes

Over the past year I have been eating, sleeping, and breathing nanotechnology, but feel like I have only scratched a little behind the ears of this enormous science. I had been following the industry, keeping up on the science for some time, but writing a book required total immersion.

The terminology is the toughest part. As I listen to the scientists talk, they seem very conversant with the difficult to pronounce “ology” and “ecular” words and the even more difficult concepts behind the words. But this is not the language of “average” people, or for that matter, the language of most of the “far above average” people that I know.

Nanotechnology is wallowing in paradoxes.

Nanotechnology has been described as the science of reinventing the world one atom at a time, yet there are an estimated three trillion atoms in a single spec of dust. Whew, it makes me tired just thinking about a number this large let alone envisioning the work that will need to go into that spec of dust to somehow make it a more perfect form of dust, you know, the kind that we will all want to have around instead of the stuff we keep trying to clean off our shoes.

It is being hailed as the most important science of all times, but relatively few people are working in it, studying it in school, or buying books on the topic.

It is being lauded as our economic future, yet investors are being told that they need to be patient, very patient, extremely patient.

People throughout history have been using nanotechnology even though they didn’t know about it, care about it, or realize that it was in the makeup their women were putting on and causing mutations in their children.

We are being told that nanotech will allow us to turn some of our genes on and off, make us lose weigh, grow more hair, get rid of wrinkles, give us more energy, cure diseases, make us live longer, and make us generally happier. But as I’m writing this I’ve found that I have gained weight, lost some more of my hair, developed a few more wrinkles, feel more fatigued, and will likely have a shorter, more disease-prone life while I live out my years as a curmudgeon of mega-proportions.

I’m being told that we will see a vast number of new nanotech products being sold in stores in the near future, but I keep conjuring up this vision of buying this ultra-tiny spec being displayed behind some giant microscope-panel in a point-of-purchase display, and paying hundreds or thousands of dollars for it and proceeding to drop it in the store parking lot with no hope of ever finding it. What is the refund policy for lost nanotech particles?

And for seemingly no reason, I’ve been developing this neurotic compulsion for grouping things in eights. For me, somehow that adds order to a world that thinks in decimal terms of 10, gets lucky in Vegas with permutations of the number seven, builds communities around land masses with four sides, and still declares “one” as the loneliest number.

Incidentally, that last point was the eighth paradox. Maybe we should call it an “octadox” if there are eight of them, but I digress.

My book on the future of nanotechnology is now in the hands of the publisher. I’m not sure exactly when the finished book will be available, but sometime in 2008. I’ll keep you posted.

← Rockstar Needed - Apply Now Messing with the Reality of Reality →