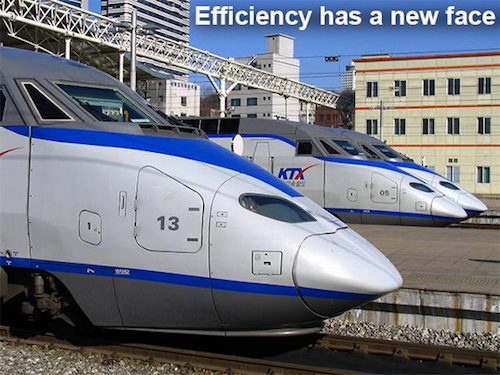 My wife Deb and I just returned from a weeklong trip to South Korea where much of our travel inside the country involved riding on the high-speed KTX Train (Korean Transit eXpress) from city to city.

The train is designed for speeds up to 350 km/h (217 mph), but currently tops out at 190 mph. Our final trip from Changwon City in the southern tip of Korea to Seoul in the far north took just 3 hours.

The entire country is 20% smaller than my home state of Colorado, but has a population of over 50 million people, greater than California, Arizona, and Colorado combined.

KTX trains are amazingly efficient with each stop lasting only 3-5 minutes and hundreds of people getting on and off at each stop. Compared to the nightmare that airports have become, where the minimum time between a plane landing and takeoff is well over an hour, and highways that slow to a crawl during most of the day, these trains are breaking down barriers of time and distance all across Korea.

Next month, KTX will connect Seoul’s Incheon Airport with the rest of its network.

Their system works because it has broken down all the barriers – no security lines, no stoplights, no traffic cops, no passport checks or customs stations, just lightning fast trains.

In addition to high-speed trains, they are known for their high-speed networks. South Korea is also rolling out a 5G network in 2017, which is 1,000 times faster than today’s 4G LTE networks.

Yes, it helps to be a small country geographically. But pushing the limits on both transportation and Internet speeds, combined with reducing barriers along the way, makes for a potent combination.

Here’s why global competitiveness and emerging technology are forcing the hands of nearly every country to rid themselves of unnecessary barriers, something I call the Great Barrier Backlash.

In 1997 Reed Hasting returned his copy of “Apollo 13” to the video store and was hit with a late fee so big that he was embarrassed to tell his wife about it. Out of this moment of humiliation the idea for Netflix was born, a business that would eventually take down the entire video rental industry, and its excessive fee-charging practices in the process.

If I’m staying in a hotel room, I don’t mind paying mini-bar rates for water and snacks if I know what they cost. I do mind if I drink a bottle of water that I assumed was complementary, only to be tagged with an $8 fee upon checkout.

Most hotels have eliminated sneaky little traps like this in favor of well-posted menus listing all the prices, but many other industries have not.

Credit card companies and banks are notorious for their late payment fees, over limit fees, overdraft fees, and anything else they can find to stack the deck in their favor.

Telecom companies have long hidden sinister fee-traps throughout their networks with the most egregious being the roaming charges that get imposed when traveling abroad.

Even government agencies have bought into this line of thinking, imposing penalties on everything from late tax filings, to wrong-day watering fines, to late utility fees, to parking fines.

In the U.S., penalty traps have become a form of debtor prisons for those unable to comply with the demands of the system. With much of their income being taken from them, they have been reduced to a life of poverty. 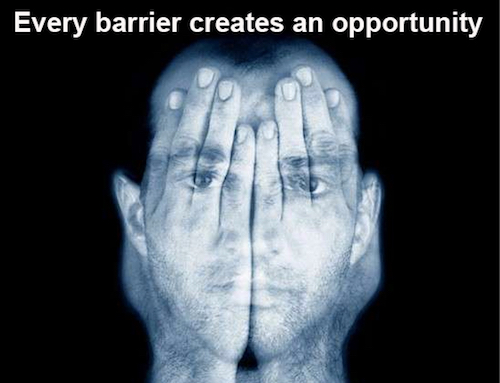 Today, many young entrepreneurs are looking at the excessive fee-charging practices of business and government with the same kind of righteous anger and opportunistic eyes that motivated Reed Hastings.

As our online communities continue to raise awareness all around the world, those operating within what is considered a legal but ethical grey zone, will find themselves increasingly exposed to public angst.

Here are a few examples that come to mind:

It’s no longer possible to hide behind a cloak of secrecy when every person you interact with has the ability to write their own headlines on social media, text a friend, or capture the problem on video. 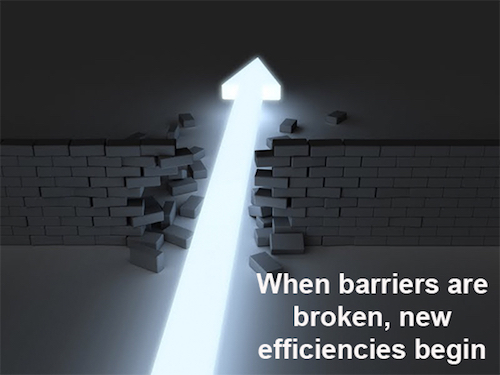 The New Age of Global Competitiveness

The people of South Korea are very aggressive. They are highly educated, tech savvy, and determined to make a name for themselves.

They have risen from a poverty-stricken, destitute nation to one of the most influential, world-class countries in the world today.

In 1957 South Korea had a lower per capita GDP than Ghana, the poorest country in the world, but today theirs is over 3 times that of China, and over 18 times those living in the penniless squalors of North Korea.

Companies in Japan, China, Singapore, and South Korea are aggressively competing for the same money as businesses in North and South America and Europe.

However, competitiveness is not just about being smarter or more aggressive, it’s also about having fewer barriers to contend with. 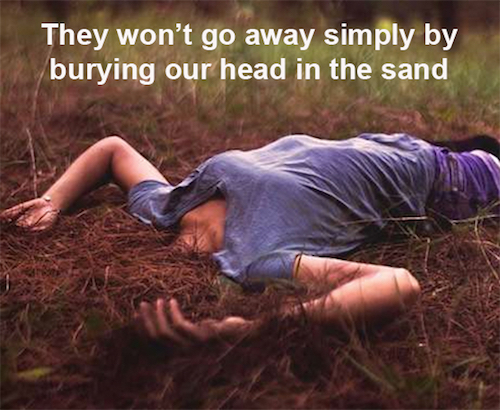 In our increasingly fluid society, people and businesses that don’t feel welcome will leave. And they may not just leave the local community, they may move to an entirely different country. Most countries are actively recruiting talented people.

Global power is constantly shifting. The 1800’s was dominated by the British. The 1900’s was the American century. The 2000’s is showing major signs of shifting towards Asia.

One of the major factors in this power shift will be personal effectiveness, and our effectiveness gets far better when we are able to strip away at all the numerous barriers we all have to contend with.

On a recent trip to Amsterdam, I texted 2 photos to Deb, only to get tagged with a $24 charge. Normal texts only cost $.50 but texting photos, unbeknownst to me, costs far more.

Sneaky charges like this are very disruptive. They disrupt our normal thinking, divert attention, and create a painful wariness about using online services in an era where online services can be the critical difference between success and failure.

When it comes to fee traps, fines and penalties, the monetary gains of the few, create losses for the many. They represent unnecessary barriers to progress, and unnecessary challenges at a time where only the most resilient will survive.