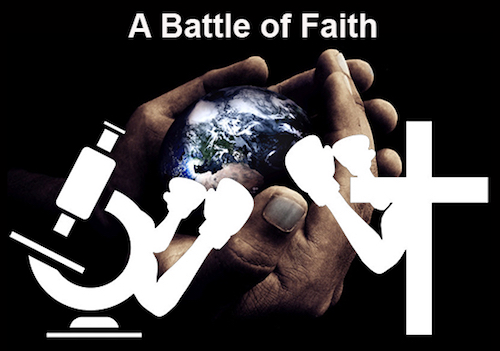 For the past several months I’ve been wrestling with this topic, and how to discuss it from a centrist viewpoint.

In an era where the science vs. religion debate has become an increasingly polarizing issue, we see both sides using their own brand of logic as the weapon of choice to gain what they assume will be the higher moral ground.

There are no “separation of church and state” policies between science and religion. They struggle to coexist.

In many respects, the battle between them has denigrated into a “my logic is better than you logic,” arguments when in reality, there are more than enough foibles to go around.

No, there hasn’t been anyone put to death because they believed in gravity, although Galileo came very close. And yes, holy wars are the cause of much of the world’s strife and the number of people who have died or been abused in the name of religion are more numerous than any plague.

Even though they employ radically different approaches, both science and religion offer the promise of a better future ahead. They offer hope. And inside each of these promises of hope is a subtle, and sometimes not-so-subtle, request to have faith.

Faith is what bridges the gap between what we know and where we hope to be going. Faith helps us connect cause and effect, bad decisions with good intentions, and everything we think and hope to be true.

Most of our decisions in life have some degree of faith hovering in the background, and science is no exception.

The reason I feel this is such an important topic is because much of our future is being formed at the intersection of science and religion. So join me as we explore bridging the chasm between the here and now and what comes next, and that innocent little thing we call faith.

According to a recent PEW report on global religions, over 80% of the world’s population is affiliated with a religious organization. So does that mean those who take the side of science only represent less than 20% of the world? Hardly.

At the same time, PEW also found that one-fifth of American adults have no religious affiliation, a trend that has been on the rise for years. Part of this group includes atheists and agnostics, but many fall into the “religious but unaffiliated” category.

There are many overlaps between science and religion:

In what can only be viewed as the most confusing of all findings, a 2008 PEW study concluded that 12% of atheists believe in God and heaven, and 10% confess to praying at least once a week. 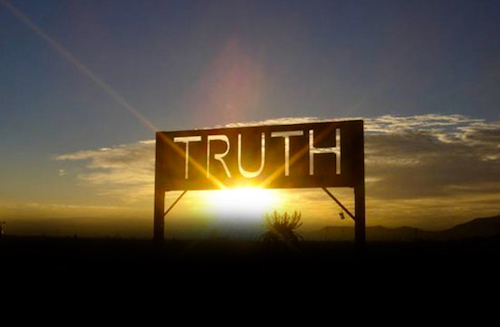 In Search of the Truth

Both are seeking to find the truth, but truth has become an elusive commodity at best. Here’s a great example.

Benoit Mandelbrot, a Polish mathematician who lived from 1924-2010, was best known as the “father of fractal geometry.” His background included stints as the Sterling Professor of Mathematical Sciences, Emeritus at Yale University; IBM Fellow at the Thomas J. Watson Research Center; and Battelle Fellow at the Pacific Northwest National Laboratory.

At one point in his career, Mandelbrot was asked the simple question, “What’s the distance around a lake?”

He responded by saying, “It depends on your perspective,” and went on to explain.

Viewing a lake from 100,000 feet, the lake has a very defined distance, easily measurable. As the altitude decreases, an observer will begin to take note of bays, inlets, and other shoreline formations making the distance around the lake longer.

Moving closer an observer will begin to notice that the shoreline is filled with rocks and trees, and nearing the ground, things like pebbles, plants, and dirt clumps come into view, making the length still longer.

Even resting on the ground, the journey is not over. Once individual grains of sand and pieces of debris become visible, we move into microscopic particles where the distance involves measuring around individual atoms and molecules.

Because of this growing level of detail, the distance around a lake approaches infinity.

The Mandelbrot perspective has far reaching implications when it comes to issues of science, religion, and faith. Is the distance around a lake measurable? It depends on your perspective, and faith has a lot to do with perspective.

Living in a Proven World

What would it be like to live in a world where everything is provable?

Every product we buy would live up to proven expectations, every change in weather would result from proven cause and effect, and every business meeting we enter into would have proven outcomes.

It’s rather ridiculous to even imagine living in that kind of world.

Our lives are filled with trillions of variables, and the science of living is as unpredictable as anything in the universe. Virtually everything we do has some element of faith hovering in the background. 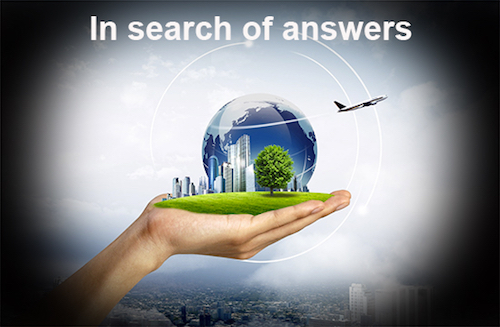 Too many questions still have no answers

Even the best theologians admit there are things they don’t know and can’t answer:

With modern technology, our awareness of the world around us grows every day. As our awareness grows, so does our doubt and uncertainty about unanswerable questions.

While scientists like to think they have better answers to life’s questions than religion does, they also struggle to answer the tough questions:

No, scientists are not required to place their hand on “The Origin of Species” and swear an oath to the truths of Darwin. Indeed, that book was wrong on many counts, including its erroneous theories about genetics.

It’s easy to touch a building and know that it’s there. When we watch a tree grow, we witness how it forms itself. When we travel to another city, we know when we’ve arrived.

All of these are factual pieces of information we store in our heads as obvious truths.

But truth also depends on your perspective, and certain truths are sometimes true but not always. We seem to have exceptions to every rule.

As an example, we now know today that the speed of light can vary.

Even with our basic understanding of math, 2+2 does not always equal 4. It depends on what type of measurement scale you are using. There are four types of measurement scales – nominal, ordinal, interval, and ratio. Only in the last two categories does 2+2 = 4.

In a similar way, religious people say prayers because they have they’re own kind of evidence that they are effective. Even though it may not be enough to constitute scientific proof, they have enough evidence to satisfy themselves that God, Satan, heaven, hell, and the human soul all exist. For some, it may be a greater leap of faith than taking medicine, but others would argue that medicine is the one requiring more faith. 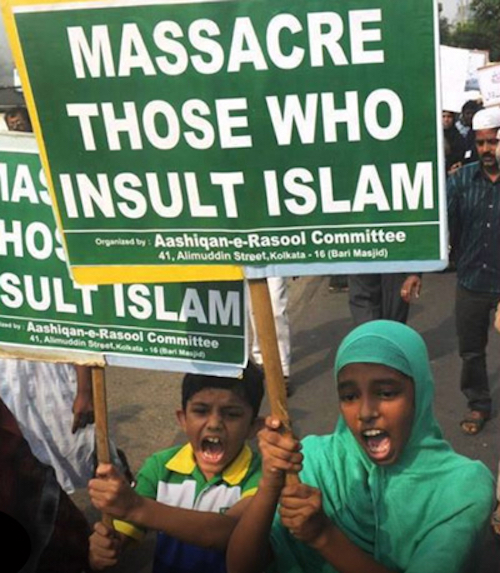 Throughout history, there are countless people who have risen to the top that have abused their position of power in the name of religion. Religious groups have more than their share of bad actors.

Whether it’s a Catholic Priest who abused children, Islamic Imams who declare a holy war, the Salem Witch Trials, the stoning of an adulteress in Saudi Arabia, the Jonestown mass-suicide, or the Duke of Lower Lorraine leading the crusade to defend the Holy Sepulcher, much blood has been shed in name of religion.

Yet even with thousand of acknowledged abuses and public displays of impropriety, religious groups continue to thrive.

Attempting to Bridge the Gap

While the feud continues, several new theories for bridging the chasm between science and religion has been advanced including one by Dr. Robert Lanza, Chief Scientist at Advanced Cell Technology and author of the book “Biocentrism.”

The theory of biocentrism teaches that life and consciousness are fundamental constants of the universe, and that consciousness creates the material universe, not the other way around.

The laws, forces, and constants of the universe appear to be fine-tuned for life, implying intelligence existed prior to matter.

The theory implies that death of consciousness simply does not exist. It only exists as a thought because people identify themselves with their body.

The human soul, from a biocentrism perspective, existed long before the body was ever created, and simply moves to a different dimension or universe upon death.

According to Lanza, many of science’s most confounding phenomena can be explained through biocentrism. Admittedly this is a heady topic with far reaching implications, but woefully short on anything resembling proof of its correctness, and no understanding of where consciousness came from in the first place.

“What’s less obvious is that science and religion need each other.
In spite of their complex relationship, they fill different roles
and the benefits far outweigh the conflicts.”

Simply witnessing something happening is not always conclusive proof. Even demonstrating cause and effect is often misleading if there is no understandable linkage between the two.

As a result, we live in a world riddled with doubt, and faith is more necessary now than ever before.

It’s easy for me to predict that 500 years from now we will still have religion. Religions are far better organized than science, and they are far more resilient to external forces and competition because they’ve already had to compete for thousands of years.

It’s also easy for me to predict that science will also be around 500 years from now, and that the findings of science will continue to conflict with the teachings of religion. After all, it was roughly 500 year ago when Copernicus unveiled his theories of a sun-centered solar system, the start of much of this feud.

What’s less obvious is that science and religion need each other. In spite of their complex relationship, they fill different roles and the benefits far outweigh the conflicts.

With everything we know, we still can’t answer the basic question, “Why does anything exist?” And as a result, we are driven by the hope that someday we’ll find answers, and faith that they’ll support what we already believe to be true.

That said, this is a controversial topic and I’d love to hear your thoughts. Please take a moment to let me know what you’re thinking in the comment section below.