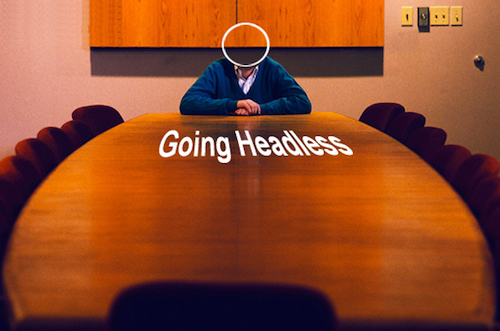 Disintermediation is a term that sprung to life in the mid-1990s during the formative years of the Internet. Enterprising people learned very quickly that this new communication system could disintermediate, or bypass, many different layers of the business food chain and eliminate entire categories of decision makers both inside and outside of corporations.

During the past decade, millions of jobs have been eliminated by circumventing the gatekeepers. As we experiment with new ways of creating organizational structure, perhaps the next step will be to totally eliminate the “head.”

So what if an organization could be developed around an operational framework with nobody at the top? What if the flow of income and ideas moved in rhythm with an organic structure much like the cells of a self-organizing plant where the leaves, stem, and root work in concert with each other to perform a given function? What if we could create a truly headless organization?

Here are some thoughts and scenarios on how this type of organization might evolve.

With the introduction of the Internet, we have seen an ongoing attrition of the heavy handed command-and-control organizational structure born out of the industrial age. Here are a few notable data points along the way:

Each of these efforts has focused on decentralizing power and decision-making structures, breaking down the traditional barriers of power and control.

While each was formed by talented people with great leadership skills, much of the inner working of the organization operated without the tradition layer of management “heads” in the middle.

Following this trend line, the logical question becomes, “How long before we start seeing some truly “headless organizations.”

People have been reinventing organizational structure for as long as we’ve had organizations. What’s different today is the speed of knowability and the growing interconnectedness between people and the systems they are part of.

Every person radiates information. Every movement, decision, action, or reaction carries with it tremendous significance. Although still primitive, we are beginning to devise ways to capture and interpret this information stream.

The central purpose of invention is to improve human ability and capability. A significant percentage of inventions are dedicated to extending human senses – seeing things outside of the range of normal eyesight, touching things too small or too large or too hot or too cold, hearing things on the other side of the world, smelling the un-smellable or tasting the un-tastable.

Virtually every act of invention adds to the framework of human abilities, and there appears to be a growing trend towards making the interface between these external sensory nodes and the human body seamless and invisible. Enter Web 5.0.

Extending these technological capabilities into the next generation of the Internet, we will find unusual ways to weave the growing knowledge bases and inherent web-based intelligences into far more sophisticated environments for commerce and business.

Without going into all of the details about what constitutes the fifth generation of web technology, I’ve put together a series of scenarios that will help guide your understanding of what the headless organization is and what some aspects of the future may actually look like.

Sitting down at the breakfast table Web 5.0 will do a quick scan of your metabolism and present you with a series of smart food menu items. Each item has been carefully selected to match both your current cravings with your present physical state and your long term health projections.

It will also know your eating history and the volume of food needed to make you feel full without exceeding specific caloric intake levels.

As the consumer, you will always have the ability to step outside of the bounds of the proposed smart foods, but in most cases you won’t want to. Both restaurants and homes will have food preparation appliances that sync with your personal profile. Restaurants will have the ability to add additional flair to the food and combine it with an unusual experience.

You’ve just started a band and have recorded a number of songs. Once posted, Web 5.0 will begin to assess the market for your music.

As interest grows, and demand reaches a certain level, Web 5.0 will step in, book a venue, and arrange for your band to perform on a specific date.

Web 5.0 will handle all the arrangements, sell tickets and merchandise, and conduct a follow-up evaluation with everyone who attended.

You are working with a team of people and decide to schedule a meeting. Web 5.0 automatically checks everyone’s calendar and schedules a time for the meeting. It will also schedule a driverless car to pick up each of the meeting attendees.

As people leave for the meeting, Web 5.0 will keep everyone apprised of the time they will be arriving, adjusting for each delay along the way.

During the meeting, several details of the current project are modified and Web 5.0 will step in to realign work schedules. Over the following days and weeks, as team member completes their pieces, Web 5.0 will make constant adjustments to the progress charts to better anticipate times for completion and closeout.

As a fledgling product designer you’ve come up with an idea for a new product you call Social Pillows. The product, as it is conceived, will allow people to send messages to friends that are sleeping, and the messages will be translated into a variety of vibrations, sounds, and other sensory signals that will manifest themselves as messages inside of a dream. Sleeping people will have their own unique way of translating the signals into a “dream message” and interpreting the results.

You believe this will be a very popular product so you write up the product description and develop some preliminary sketches. You also agree to pay the reviewer fee and submit the product idea to Web 5.0.

Based on the type of product, Web 5.0 will select three veteran product reviewers and hires them to give their feedback. Because of their recommendations, the product may be modified, green-lighted to move forward, or sent back to you with a low probability rating. Every submission may require several iterations of the product review process.

Once the product has received a sufficiently high probability rating, Web 5.0 will begin to assemble the product development team. As the original product designer, you will have the final say as to who will be involved with your product.

As soon as the product development team is assembled, Web 5.0 will do some preliminary market testing to gauge the likely consumer response and overall size of the opportunity. This process will be repeated several times along the way to evaluate design features, final form factors, and the effect each change has on the target market.

Web 5.0 will also do a preliminary patent search and determine if there is any existing intellectual property that may already exist and file a provisional patent to serve as a placeholder for the final product. It should be noted that with the introduction of Web 5.0, only completed products and demonstrable technologies will be eligible for patent protection.

Next, Web 5.0 will assemble the manufacturing team, along with a distribution, logistics, and fulfillment teams.

With all of the teams and market projections in place, Web 5.0 will begin to search for possible investors. As the original designer you will have veto power over who can participate in both the creation side and investing side of your product.

Once investors are in place, Web 5.0 will recommend a royalty split between all parties involved using a fractals transaction formula that automatically channels revenue streams to each invested party. Based on anticipated risks and levels of involvement there may be some negotiating of the percentages, but Web 5.0 will work to either resolve any dispute or, as a last resort, replace one of the disputing parties.

Since many of the people involved are agreeing to a percentage of the revenue stream instead of a salary, the need for investment money will be greatly reduced. In the end, the revenue stream may be divided between as many as 40-50 people. Money will also flow into insurance policies that cover problems involving product liability, process disruptions, or other issues.

As soon as all parties agree, the development process will commence with Web 5.0 keeping all parties appraised each step of the way. Calendars and schedules will be constantly updated along the way as soon as every preceding accomplishment is logged.

For this particular product, making it into the marketplace will be far less challenging than sorting out the privacy issues associated with Social Pillows and the ensuing debate over who has the right to enter your dreams. Marketing companies will want to give Pillows away that come with embedded with subliminal marketing messages, and spammers will try to hack into the Social Pillows communication network.

Throughout the whole process, Web 5.0 will serve as the connector, the mediator, the knowledge assembler, and the decision coordinator. It will be both the guiding hand and the neutral observer as all final decision will be left in the hands of those participating.

At this point we don’t know, but it’s safe to say that people wanting to thwart governmental controls will constantly push to become more invisible, and by increasing the “headlessness” of a business, the slipperier they are to work with.

The inventiveness of humanity is limitless, and organizational structure has only begun to evolve.

← Business Colonies: A study of structure, organization, and the evolution of work Where the Books Used to Be →