Business Colonies: A study of structure, organization, and the evolution of work 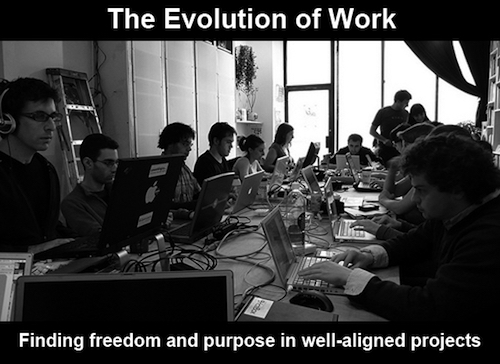 Business is becoming very fluid in how it operates, and the driving force behind this liquefaction is a digital network that connects buyers with sellers faster and more efficiently than ever in the past.

But the effect of our flowing digital business world does not stop with how transactions are performed. Instead, it has begun to morph and change virtually every aspect of how business is conducted including the duration and permanency of work assignments, the employer-employee relationship, and the organizing principals around which work assignments and talent coalesce.

At the heart of the coming work revolution will be a new kind of business structure serving as an organizational magnet for work projects and the free-agent talent needed to complete the work. This new structure is what I have conceptualized as a business colony.

Business colonies are an evolving new kind of organizational structure designed around matching talent with pending work projects. The operation will revolve around some combination of resident people based in a physical facility and a non-resident virtual workforce. Some will forgo the cost of the physical facility completely, opting instead to form around an entirely virtual communications structure.

Most will be organized around a topical area best suited for the talent base of the core team. As an example, a team of photonics engineers will attract projects best suited for that kind of talent. Likewise, a working group of programmers specializing in computer gaming applications will serve as a magnet for new gaming projects.

In some instances, large corporations will launch their own business colonies as a way to expand capability without adding to their headcount. Staffed with a few project managers, the company will use the colony as a proving ground for experimental assignments best performed outside of the cultural bounds of existing workflow.

Colonies will develop their own standard operating procedures with consistent agreements, payment processes, legal structures, management software, and methods for resolving disputes. Over time they will be rated on their ability to complete tasks with specific ratings on efficiency, quality of work, and how well they treat the talent.

The driving forces behind business colonies are more than the fact that it is a good idea. Rather, it is being driven by a combination of technology, emerging culture, and governmental systems that make it the logical next step in the evolution of work.

Employment law in the U.S. is making it increasingly expensive to hire people. Each new-hire comes with the additional burden of managing benefits, payroll accounting, withholdings, human resource compliance, and a wide assortment of other issues.

Every time a new “jobs” bill makes its way through Congress, any new decision points adds to the overall complexity of being an employer, and causes the burden of compliance to escalate.

As a result, companies are looking for ways to circumvent the escalating costs of adding staff, and project-based work becomes a logical option.

Additionally, technology is making it increasingly easy to match talent with waiting work assignments. Companies like Elance, RentACoder, Guru, and CrowdSpring are job bidding sites designed to connect global talent with work assignments. Even though they’ve built a solid base of operation, they tend to be a poor match for seasoned professionals who are not interested in competing on price.

Not all business situations lend themselves to a “colonized” workforce. Here are a few situations where business colonies are not a good fit.

While not every position will lend itself to the transformative nature of project work, managers around the world are about to embark upon a lengthy period of experimentation as they probe time and again to see what works and what doesn’t.

Given the choice between a stable 40-hour a week job and doing project work, why would anyone be interested in working on projects?

Indeed, there are many reasons.

Yes, some people may be unemployed and have no other options. But that will only play a minor role as most people running business colonies will be more inclined to work with those who are drawn to, and have acclimated to, the project-work lifestyle.

Young people today do not want to fall into the same trap that their parents were in, dependent upon a single employer with virtually no control over their own destiny.

Ironically, people who do project work today find great security in being able to bounce from one project to the next without having to quit or resign from the last position.

There is great freedom to be found in aligning yourself only with the projects well suited for your interests and skills. In addition, the work becomes more meaningful and rewarding when someone is putting their reputation on the line and completing it in stellar fashion.

Even though the projects may come with strict deadlines, people also find greater purpose in being able to pick the projects they want, and the flexibility to perform the work in a manner of their own choosing.

When you add up all of the positives – stability, flexibility, freedom, purpose, meaning, and an ability to control your own destiny – the business colony lifestyle brings with it some powerfully compelling reasons to switch.

As a project flows into a colony, the first step will be to assess the overall size and scale of the assignment and break it into logical and chunk-able tasks. Some projects will come with fixed budgets while others will determine the scope of work and negotiate the price as a preliminary step inside the colony.

Once tasks are defined and organized around a working timetable for completion, work projects will then be divided up and assigned to those who will complete them.

Most colony members will be business entities. In fact, many will require that all members form their own LLC or other type of legal entity for tax purposes.

One-person LLCs are the typical way for individuals to magically transform themselves into businesses and avoid the hassles.

Any payments will still be tagged as 1099 income, but direct payments to a company will eliminate tax filings, matching funds, and the complexities of payroll accounting. So the efficiency of any colony will hinge on the conversion of talent into private one-person business enterprises.

Even though everyone will be working as a business entity, project assignments will be based on the reputation of the individual.

In a business colony environment, reputation is everything. People with stellar reputations among colony leaders will always be at the top of the call list whenever a new project arrives.

Those who come to a colony for the first time will attempt to work their way up the hiring ladder as a way of improving the odds of a project manager selecting them as they assign talent to each new projects.

Some fast-moving projects may quickly expand outside of the bounds of a project manager’s “friend network” and that is where referral systems and social networks come into play.

An online reputation consists of many things. Beyond the standard profiles and carefully crafted bios are an entire sub-layer of conversations, photos, videos, data sets, and reference points which add to the overall impression someone will use to assess your abilities.

Similar to the photo stitching technology which pieces together thousands of photos into one giant master photo, future reputation-stitching software will be used to develop reputation mosaics that sew together all of the online informational fragments into one comprehensive personality montage.

Thinking further, reputation-stitching software will incorporate various types of analytical tools for determining how well a particular project will match up with an individual’s ability to perform on it. At the same time, other applications will be developed to help people optimize their reputations for working on certain types of projects.

Coworking spaces, like The Vault that we operate at the DaVinci Institute, are the logical forerunners to business colonies. Most consist of an aggregation of talent with additional capacity to take on extra projects.

However, colonies will form in many different ways. Some will be private colonies run by large corporations. Others will form around a specific talent pool with specialties in such areas as metallurgy, bioinformatics, data mining, social mapping, or video production. Still others will be non-profit colonies formed around a specific cause like clean water, halting the spread of malaria, or rebuilding Haiti.

Over time, colleges will begin to transform themselves into educational colonies with an assortment of internal business colonies designed to give students practical work experience in parallel with their studies. Rather than tenured faculty, educational colonies will consist of “teaching entities” that are matched to curriculums on a project by project basis.

The business world is constantly being tasked with doing more for less. Virtually any company that cannot find ways to do things more efficiently and reduce costs will not survive.

Typically the largest number on a company balance sheet is the cost of labor.

Business colonies are an organic process of matching labor to projects for the exact duration of the contract. No more, no less. Overhead costs, compliance and accounting issues are all minimized to improve the overall efficiency of the operation.

I don’t see business colonies as a way for corporations to take advantage of cheap labor, although many will try. Rather, the coming era of skill shortages will put talented people in the driver’s seat with many commanding increasingly high rates for their unique abilities.

Over time, people will be credentialed by the colonies they are associated with. Each colony will carry a certain pedigree, and the earliest among them will become the Harvard’s and Yale’s of the colony world.

In the future, few will be able to relate to the elaborate hiring and firing systems that we use today. As we enter the era of business colonies, business, as we know it, will become a thing of the past.