The Last Bastion of Scarcity 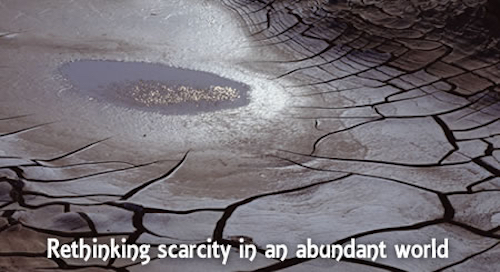 Science fiction has long dreamed of a post-scarcity society, and it’s become quite common to hear discussions about transitioning from a world of scarcity to a world of abundance. But, for all the good intentions and creative thinking, our limitations, both human and material, will be an ever-present force in society and a very necessary one. The trick is understanding which aspects of society will flow towards abundance and which ones will not.

Abundance as described by James Heskett, a professor emeritus at Harvard writing for Working Knowledge:  “It is a world where everything digital is available at all times. And because of the very low cost of maintaining and distributing inventory, everything is likely to remain available forever. … It is a world of non-zero-sum thinking.”

The basic assumption – that all things scarce can somehow be magically transformed into all things abundant – is nonsense. Nothing could be further from the truth. Unless the laws of physics are rewritten, certain things will never reach the level of what is called abundant.  That said, abundance is now happening in some very unusual ways.

Abundance theory falls apart when it contends with physical limitations. You can’t transform an SUV to digits and have one spit out of your printer, not yet anyway, and not one that is suitable for its intended purpose. Another example: When I drive to meetings in Denver, I sometimes choose the toll road because there are a limited number of commuting options for getting there. Should roads be more abundant? Yes, telecommuting options may void our need to be physically present. But if we need to personally travel across town, we are a long ways from reaching the point of abundant commuting options – at least, not until we create inexpensive flying cars (at which time toll roads will disappear).

A better way of discussing the changes upon us is to think in terms of which products and industries are about to lose their pricing advantage because of their inability to control the supply chain – not as sexy, but perhaps more useful for analysis.

Economies today are based on scarcity. It is necessary, then, to understand which products, services, and industries are about to lose their competitive pricing edge.

To understand the scarcity-abundance phenomena, it helps to look at historically scarce products that somehow lost their price point advantage.

The scarcity-abundance shift only happened on rare occasions up until the advent of Internet and electronic commerce. With over-night successes occurring with some regularity, the World Wide Web has become a platform for tectonic plate movements that tear down as well as build up. Well-managed corporate giants now have teams scouring the entrepreneurial landscape to see where the next disruption may occur.

The Next Targets of the Abundance Tidal Waves

Some of the targets are easy to spot, while others will be eviscerated through hard-to-quantify indirect means.

The best way to spot possible targets is to evaluate the size of an industry economically, and the level of discontent among customers. In the past, I’ve used what I call a “customer abuse index” to determine which industries have the least promising – or maybe the most abusive – relationships with their customers. A high customer abuse index indicates a company or industry begging to have its legs cut out from under it. Companies with labyrinthine phone trees immediately come to mind.

Another piece of the equation: Government will have far greater difficulty protecting industries the way it has in the past. As we continue to shift to a hyper-competitive global marketplace, the laws of an individual country will offer relatively poor security for staving off disruptive change.

A few of the major industries on the verge of revolution/disruption:

The Last Bastion of Scarcity

So the question remains: What areas of life will be able to maintain their pricing integrity and remain “abundance proof?”

In producing this list, it became apparent that most of the scarcity staples are staples for the reason humans have built-in limitations. Understanding these limitations is key to understanding the marketplace of tomorrow.

The list above is certainly not exhaustive, but it is designed to help frame the thinking around which businesses will transition in the future. Many of these changes will come quickly, disrupting the lives of countless millions.

At the same time, industries producing abundance will benefit exponentially as cost of living indexes plummet.

The scarcity-abundance shift does not ignore the laws of supply and demand – it somehow changes them. Perhaps new laws are in order.

← The Future of Agriculture Watching the Income Tax System Implode →