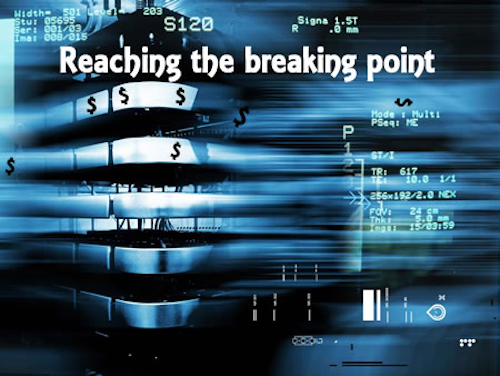 When it comes to our tax systems, we are living in caveman times

In the movie The Day After Tomorrow, survivors stranded in a library are easily persuaded to burn the multi-volume IRS Tax Code to stay warm. In this fictional scenario, the question one might ask before securing a match: Why did we wait until the end of the world?

In 2003, I wrote a paper titled “The Coming Collapse of Income Tax” in which I predicted that our current income tax system would collapse within 10 years. My prediction stands, even as the clock is running out of time. I am still firmly convinced the collapse is near.

Tax expert Calvin Johnson testified before the U.S. Government Affairs Committee in 2003 taking to task the relationships of public accountants and the tax shelter industry. Johnson, a law professor at the University of Texas at Austin told the Senate panel that writing “tax shelters has done real damage to the tax system and allowed many taxpayers who should pay income taxes of 35 percent to pay 10 percent.” The tax base has eroded as a consequence, he noted.

The tax system is yet another system that has been so bastardized from original form, it bears no resemblance to a system at all. It is a jumble of instructions, a wilderness of tangled vines only the bravest of us would dare venture into without software or a battery of lawyers and accountants.

What’s more, the tax system is drastically out of step with the rest of the world.  As business continues to shift from national to global in scope, the observable trend toward an ever more complicated taxing formula is doomed. The government’s round-the-calendar attempts to bring ever greater precision to extracting the perfect, yet optimal amount of taxes from every individual to achieve some vague notion of fairness, flies in the face of logic and world trends.

If taxes were paid through an automated system built around seamless and invisible processes, the system might have a chance to survive. However, the current adversarial model, which is based on minutely detailed tax codes backed up with forced compliance, is a system that can’t last. Small businesses, in particular, await this day.

A View from the Future

People in the future will look back at this era and use our tax code as an example of the ultimate stupid system.

The IRS Tax Code ultimately will take its place alongside phrenology and alchemy in insipid history. Most embarrassing for the several generations that have endured the growing encyclopedia of code is taxpayers ultimately pick up the cost of the multi-billion industry devoted to divining its meaning. We had not come far, historians will say. Before the invention of the wheel, cavemen carried everything on their backs. So do we.

The all-consuming nature of tax preparation has been grinding the gears of the economy for decades. It is a major obstacle, stifling business and commerce and sucking talent and intellectual bandwidth into an irretrievable bureaucratic black hole.

Few believe – horror of horrors – if their most recent tax filing were put to severe scrutiny that they would emerge unscathed. And therein lies the problem. Income tax has become an adversarial relationship between government and taxpayer. Taxpayers are constantly running for cover from the latest barrage of mortar shells containing a labyrinthine complexity written in unforgivably obtuse bureaucratese.

A tax system Armageddon is near.

The inevitability of system failure does not portend the end of taxes, though. Government will need money to operate. Our ability to function within a monetized society is dependent upon some system for generating money for the government’s coffers.

I am not predicting which new kind of tax will emerge from this, only that it will happen. 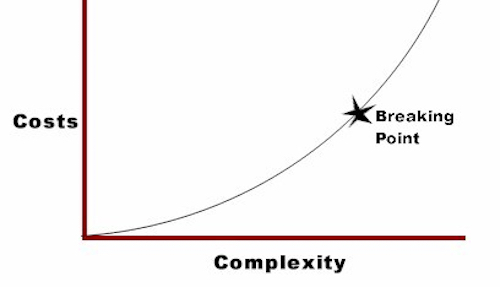 The Exponential Nature of Complexity

It can be argued that all major civilizations have collapsed under the weight of unsustainable levels of complexity. In major civilizations such as the Egyptian, Greek, or Roman empires, as well as in smaller civilizations like the Mayan Indians and Mesopotamia, each had reached a point where an all-powerful bureaucracy building an ever increasing number of rules simply overloaded the administrator’s ability to comply with them, and the systems collapsed.

The government lacks a checks-and-balance system to mitigate complexity.

We are on a slippery slope. As complexity of a system increases, the costs associated with it increase exponentially to the point where the costs approach infinity, and collapse is a certainty.

Triggers vs. the Black Swan

In Nassim Nicholas Taleb’s 2007 book The Black Swan, he refers to a large-impact, improbable, and rare event “black swans.” In the work I do as a futurist, I look carefully for what I call “triggers” – incidents that precipitate major change.

The key difference is that anticipating a black swan event, by definition, is not possible. Usually after it occurs, it is rationalized in hindsight. Triggers, on the other hand, can be envisioned with foresight.

Whether people are blindsided by massive changes to our taxes like a black swan event or whether there are very clear, predictable triggers, the fact remains change is inevitable. We are on the verge of a breakdown and adoption of a very different system to replace our current tax code.

Here are some possible triggers:

1. Political Trigger 1:  During the confirmation process, several Obama political appointees were either dropped from consideration or had their reputation tarnished because of past tax issues. Tax problems have become common enough that the government will be compelled to make changes, if simply to avoid the routine political embarrassment. Obama could not be blamed if some future flare that sends him out of the White House becomes the catalyst for a special commission tasked to  bring about change.

2. Political Trigger 2:  With plans for a national health care system and funding for education reform hanging on the government’s ability to pay for them, a new tax system emerges from these massive efforts to pay for these programs.

3. Technology Trigger:  A new automated tax structure is created that makes tax collection seamless and invisible to the general public.

4. Individual State Trigger:  Currently seven states in the U.S. do not have state income tax. Some states like Wyoming and Alaska have huge income streams from their natural resources. Other states are supported by higher property taxes and other tax levies. A modified individual state tax system could become the model for the new national system.

5. Budget Crisis Trigger:  Because of the extreme debt load created by recent stimulus packages, the government has to scrape for more money. Ultimately, government is forced to rethink the tax system to prevent national insolvency.

6. Wealthy Individual Trigger:  A wealthy individual files a well-publicized lawsuit against the IRS. The plaintiff’s lawyers note that their client, who is of far-above-average intelligence and armed with extraordinary resources, is simply no match for the complexity of the tax code and cannot be reasonably expected to comply with the law by completing a 1040. The lawsuit places all concerned with the administration of the IRS in the indefensible position of having to explain the tax code. Good luck on that one, IRS. The day is won with unassailable logic: inability to determine what to pay out in taxes is persuasive and the U.S. Supreme Court hands down a decision to abolish the system.

7. Class Action Trigger:  A group of some 200 of the largest tax payers file a class action lawsuit against the U.S. government for a number of competitive impairment issues. The lawsuit triggers a national debate between politicians and the wealthiest individuals in the country. The government settles out of court, agreeing to throw out the entire system and start over.

While the concept of taxes has been around since ancient times, the idea of a formalized income tax has not. The first income tax in the United States was signed into law in 1862 by President Lincoln to help pay for Civil War expenses. But the amount was relatively small and during this time 90 percent of all revenues came from taxes on liquor, beer, wine and tobacco. Still, opposition arose and income tax laws were repealed in 1872.

Today’s income tax has its roots in the 16th Amendment to the Constitution, ratified in 1913. The amendment stated, “Congress shall have the power to lay and collect taxes on incomes, from whatever source derived, without apportionment among the several states, and without regard to any census or enumeration.” Later, Congress adopted a 1 percent tax on net personal income of more than $3,000 with a surtax of 6 percent on incomes of more than $500,000. This is when the first 1040 Form was introduced.

Competition in the global marketplace is fierce. For any one country to maintain the lead, the systems within which it operates must aspire to higher and higher levels of efficiencies.

Every single purchase made in the U.S. is a tax point decision. Every time people buy a loaf of bread, pack of gum, or put gas into their cars they have to make a decision – is this deductible or is this not? There are literally over a trillion transactions made each year. And each one of these decisions is a judgment call.

This also means that people have to maintain records to bolster support for their decisions. In other words, over a trillion pieces of documentation have to be produced annually just in case some of the items might be tax deductible. And these records have to be saved for at least five years, often much longer.

To put this in perspective, the taxes paid into the government each year are based on over a trillion judgment calls by people interpreting their understanding of a tax code consisting of several thousand pages of paper that they have never personally read… or care to read.

With staggering levels of detail required to support this system, one has to ask the questions: Why do we care? And why is this important?

Change does not happen because everyone gets together first and decides a change is going to happen. Momentum will build quickly around a single event or thought leader. When the general public senses that the end is near, an overwhelming flood of support will rapidly hasten its demise.