The Laws of Exponential Capabilities 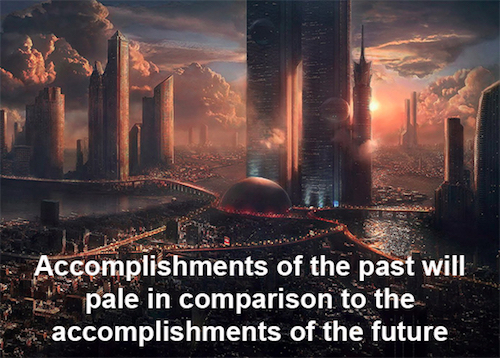 When people like Google CEO, Larry Page, Virgin’s Richard Branson, and X-Prize Foundation CEO, Peter Diamandis, talk about us entering into a period of abundance, there has been a natural tendency to assume we’ll be entering into a life of leisure. People won’t have to work as hard and we will all have more time for travel, vacations, and play.

Yes, we are entering into a world where driverless vehicles will eliminate millions of driving positions; robotic systems will work relentlessly day and night eliminating millions of manufacturing, welding, painting, and assembly positions; and things that seemed impossible to automate in the past will have computers and machines replacing people’s jobs.

With these types of automation and AI (artificial intelligence) replacing human involvement, the discussion has focused on solutions like shared jobs, micro employment, and guaranteed income.

While those may be options, there’s also great danger in preparing for “slacker lifestyles” where people feel less significant, less certain about their future, and less connected to the value they have to offer. As a society we risk becoming soft and lazy.

There is great value in the human struggle, and when we fail to be challenged, our best-laid plans tend to fall apart at the seams.

Today, the amount of time it takes to build ships and skyscrapers, create massive data storage centers for all our growing volumes of information, or produce global wireless networks for all our devices has dropped significantly. But along with each of these drops is a parallel increase in our capabilities and our expectations.

For these reasons, I’d like to reframe the discussion by proposing the following “Laws of Exponential Capabilities”:

LAW #1: With automation, every exponential decrease in effort creates an equal and opposite exponential increase in capabilities.

LAW #3: As we raise the bar for our achievements, we also reset the norm for our expectations.

Here’s why this is so critically important. 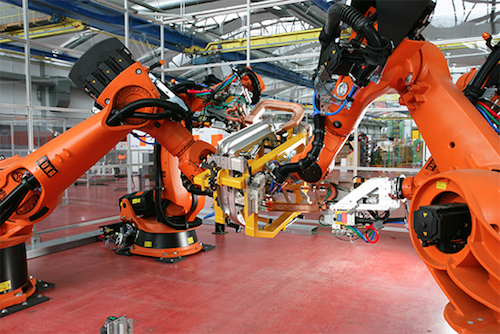 LAW #1 – With automation, every exponential decrease in effort creates an equal and opposite exponential increase in capabilities.

When it takes less effort to do something, we naturally do more things. This has been proven out time and again throughout the centuries.

To illustrate this point, here are three industries that have radically changed humanity over the past centuries – Transportation, Photography, and Media.

1.) Transportation: Thinking in terms of our travel capabilities, if we use the average transportation speeds in Richard Florida’s “Great Reset,” we can extrapolate an exponential growth in the number of miles the average person will travel over their lifetime.

We have transitioned from slow and difficult forms of transportation to fast and painless. Going from 73,000 to 7.3 million miles in a lifetime is a 100X increase in human mobility.

2.) Photography: The famous photograph titled, “View from the Window at Le Gras” by Nicéphore Niépce in 1826, was one of the first photos ever taken and the oldest surviving one.

Photography started as a slow and arduous process in the 1800s requiring exacting precision and lots of time. With the introduction of cheaper and better cameras, film, and processing the number of photos taken began working its way up the exponential growth curve.

But it wasn’t until recently, with the birth of digital cameras in our phones and free storage, that the number of photos per day really took off.

3.) Media: Before the time of Gutenberg’s printing press, our information sources were limited to person-to-person conversations and a tiny number of hand written scrolls and manuscripts. People who lived during the middle ages spent very little time consuming information simply because it wasn’t accessible.

By 1600, India’s Mughal Emperor, Akbar the Great, had accumulated a personal library of over 24,000 books. By comparison, in 1815, Thomas Jefferson had acquired the largest personal collection of books in the United States, totaling 6,487 volumes.

Both of these numbers are in stark contrast to the millions of title available today on Amazon. But when it comes to media, we consume far more than just books.

On a global level, a 2012 study showed that people on average spend 10 hours 39 minutes per day consuming information. This was broken into 260 minutes on the Internet, 150 minutes watching television, 77 minutes mobile Internet, 71 minutes listening to the radio, 43 minutes playing games, and 38 minutes reading print media.

In countries like the U.S., Korea, and Japan, the numbers are considerably higher – over 12 hours per day – and China is now working overtime to reign in a growing problem with people becoming addicted to the Internet. As a result, a number of anti-addiction treatment centers have cropped up to deal with the problem. 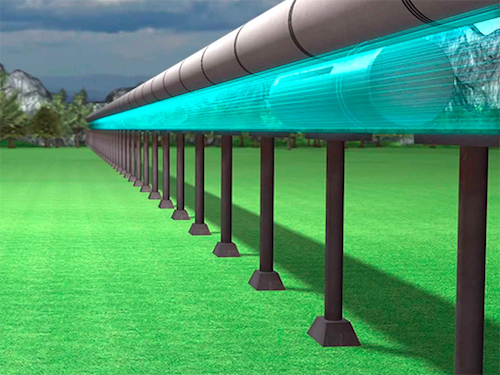 It is no longer reasonable to assume the same mega-project that have challenged us in the past will be the same size and scale of the mega projects that will be needed to challenge us in the future.

Living in a world where our ever-expanding use of automation and AI is reducing the human contribution in nearly every achievement, we are also witnessing a dilution in the value of past benchmarks.

For this reason, a new generation of mega accomplishments are beginning to surface.

One example of a next generation mega project is the Elon Musk – Daryl Oster proposed transportation system where specially designed capsules are placed into sealed vacuum tubes and shot, much like rockets, to their destination. While high-speed trains are breaking the 300 mph speed barrier, tube transportation has the potential of reaching speeds of 4,000 mph, turning it into a form of “space travel on earth.”

Even though tube travel like this will beat every other form of transportation in terms of speed, power consumption, pollution, and safety, the big missing element is its infrastructure, a tube network envisioned to combine well over 100,000 miles of connected links.

While many look at this and see the lack of infrastructure as a huge obstacle, it is just the opposite, one of the biggest opportunities ever.

Constructing the tube network has the potential of becoming the largest infrastructure project the earth has ever seen, with a projected 50-year build-out employing hundreds of millions people along the way. 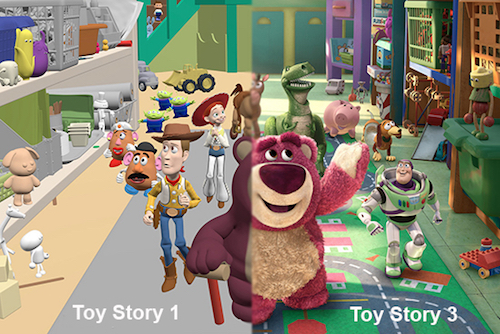 LAW #3 – As we raise the bar for our achievements, we also reset the norm for our expectations.

When Pixar released the first Toy Story in 1995, it was the first feature film to be produced entirely with computer animation. Naturally it looked a little rough around the edges compared to the new stuff, but it represented a massive breakthrough in the way animated films were produced.

Fifteen years later, in 2010, when Toy Story 3 was released, the Pixar team raised the bar considerably on the quality and detail of the animation. It didn’t take them less time to produce, but instead they dedicated tremendous effort to raising the quality standard. (The photo above is a great illustration of the difference.)

This raising of standards in quality, value, and usability can be seen all around us:

Crazy-Big Projects of the Future

Whether it’s building the Great Pyramids in Egypt, erecting the Great Wall of China, or sending someone to the moon, crazy-big projects have a way of defining our humanity and raising the bar for future generations.

As our capabilities improve, we simply need to set our sights higher and aim for the stars…. literally!

If you’re still struggling with what the mega-projects of the future might be, here are a few to consider:

At this point, the “Laws of Exponential Capabilities” are a working theory that I’m hoping to refine over time.

With all of our increased capabilities, perhaps the one we are lacking the most is our ability to anticipate problems.

That said I‘d love to hear your thoughts. What’s missing, what needs to be reworked, and where is this most and least applicable?

We will all be spending the rest of our lives in the future, so we all have a vested interest in understanding it better.