The Museum of the Future 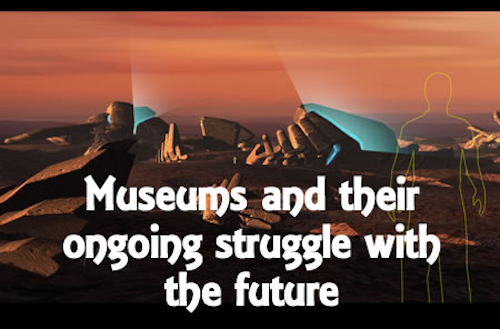 Just mention the word museum and a myriad of images come to mind. Folks line up for blocks for a King Tut exhibit. Visitors swarm extravagant nanotechnology and human anatomy displays. Static displays have been the bread and butter for years. That is changing.

Museums these days seem to cater more and more to the fun-science junkie in us. There is no lack of variety and many museums are hard at work at attracting crowds, sometimes employing lavish showmanship. Animatronics have been making the rounds in recent years.

Others are getting into the act, too. Melbourne-based Creature Technology Co. has turned dinosaurs and giant apes into a cash cow. Check out the Walking With Dinosaurs: The Arena Spectacular on the Wired web site. The 110 shows brought in a reported $110 million. On a different track, Ripley’s has assembled very individualized collections. The storefronts harbor distinct sets of unusual exhibits.

Government support has been ebbing in recent years. A 2007 Orinda Group report shows 20 percent of museum funding still comes from government sources. Museums, though, have been moving on other fronts to make up for lost cash.

The attractiveness of museums is they are uniquely formed around individual themes, collections, and audiences. They have their own identity, their own reputation, and their own sphere of influence. The subjects range from Frank Lloyd Wright and Roy Rogers to Egypt and aerospace. Museums find and serve a constituency, and that constituency now has to share a greater amount of support.

Traditionally, private- and public-fund supported museums created their own value: value to community, value to staff members, and most importantly, value to their visitors. The value is still there, but today’s museum needs to have more going for it. Museums have to evolve.

In 2002, museums began casting about for more revenue opportunities, using blogs to expand their support base. When social media came along, museums made forays there, too.

Sunnyvale, CA’s Moffett Field, which is location for the NASA Ames Research Center, evolved from an aeronautics museum to a world-class research facility, which today is host to the elite Singularity University. The facility partners with industry, academia and non-profit organizations. This may be the extreme example, but it is a good one to point to for what a museum finding itself at a center of technology can become.

Corporate partnering, however, is still a small contributor to the bottom line for many museums.

In the 19th-century, museums were designed around curio cabinets lorded over by topical experts. In the 1960s, a dramatic shift away from emphasizing static displays took hold. Interactivity became the buzz word in the venerable halls.

Today it appears that participative exhibits, social networking, and crowdsourcing are slowly beginning to pay off for the museum entrants in this relatively new marketing environment.

Virtual exhibits are popping up on the net. The interaction with a monitor may not completely satisfy, though. Just because someone has seen a photograph of the Statue of Liberty, it is still a far cry from actually having “experienced it.”

I see eight key trends influencing museums both today and into the future:

1.) The Laws of Relevance. The key issue of change hinges on the concept of relevance. How relevant are museums to busy people with a multitude of other entertainment and education alternatives. In much the way Google uses a relevancy scale to measure the importance of web pages, ads, and search results to a particular individual, would-be museum-goers create a similar relevancy calculation. The calculation will determine whether their anticipated museum experience ranks higher than everything else on their list.

2.) An Attention Compressed Constituency. The toll of our information-rich environment is clearly seen in our short-attention span offspring. With television scene changes making their way into the sub-2 second range, we have spawned a generation preoccupied with switching from distraction to distraction. We may rue the day VCR players and TIVO were invented.  One doesn’t have to pay attention at all. You can leave the room and later return, missing nothing thanks to rewind. Every mild interruption charters a new course. As Wired editor Chris Anderson describes in his new book “Free: The Future of a Radical Price,” there is a delicate balance between abundance and scarcity. Where we now have an abundance of information, friends, and entertainment options, we now confront our own scarcity of time and attention.

3.) The Reputation Marketplace. Where do people go to decide what’s important? Carefully crafting a solid reputation in traditional media like newspapers, magazines, and radio stations is great for attracting people from nursing homes. It is time to ask, though: What target market are museums trying to attract? If a museum is not wading into the YouTube Channel with regular weekly updates, it is missing a huge opportunity to capture the 15 to 35 demographic. When is the last time a teenager mentioned your museum on Facebook? When someone visits your museum, can they punch in a number on their iPhone or iPod and hear the story about a particular exhibit? If not, welcome to the new technology gap. Almost every business is examining the latest data on these trends.

4.) The Movement to Free. Much like the St. Louis Zoo and the Smithsonian, museums need to come to grips with running an operation where the admissions are based on that very non-discriminating price called free. Gate admission should be free of charge. People now have a multitude of competing options that are also free. Removing the price barrier will keep museums in the running. Keep in mind that free admissions does not mean everything is free. Museums can get very creative in charging for shows, special events, pay-to-play exhibits, and unique merchandise. Getting people in the door is far more valuable than the small amount earned at the gate. Again, the Chris Anderson book “Free” is a great guide to understanding the new realities.

5.) Surprise Element. People don’t come to museums to see the common and ordinary. They come to be surprised. Yes, they will learn much from having a base of solid information to walk away with, but the things they most remember are the surprises. Extreme novelty not only has its place, it becomes the centerpiece. Not only do people wish to be surprised, they insist on being surprised with each and every visit. Static content is certain death among the “so yesterday”-avoiding young.

6.) The Participatory Experience. People are no longer comfortable with information flowing in only one direction. They wish to participate, contribute, leave their mark, and take ownership of it. The top-down mindset of ”this-is-what-you-need-to-know” doesn’t mesh well with the visitor who is thinking “this-is-what-I-want-to-learn.” Participation is another way of showing respect. You not only respect them enough to touch it, and to interact with it, but enough to value their contribution. This is an area where lip service will not do. In a world where an authentic voice matters, disingenuous intentions can be spotted from a mile away.

7.) Rethinking Visitation Cycles. How often do people go to the same museum? Museums do not have the communal attributes of a coffee shop, nor are they formed around the necessities of life found in a grocery store. They are not in the business of first-run movies, nor do they provide a place for regular workouts like a recreation center. However the 2-4 year visitation cycle that many museums have today will simply not work in the future. Relevance, much like attention spans, is being framed around shorter and shorter cycles.

8.) Fluid Dynamics. While many people wonder why so many gifted and skilled artists dedicate their lives to building sand sculptures, the epitome of a transient and temporary form of artwork, an equal number of people are asking why museums think their exhibits have to last forever. The next generation of museums will be built around fluid structures that can change whenever needed, and with the seasons if necessary. Culture is never static, and neither is history.

In spite of the chaotic times we live in, museums have a rich future ahead. Cities are desperately seeking to anchor their identities to existing cultural centers, and museums with their stellar public persona, serve as an easy rallying point.

I have a teenage granddaughter who has been averaging 28,000 text messages a month, which to my generation seems way out of bounds at first blush. My first reaction was to say “this is wrong.” But I came to the conclusion it is morally neutral. It is what it is – a young girl taking advantage of the technology she has at her disposal. It is more than trend, just ask the mobile carriers.

Similarly, museum projects that are not tuned into present realities are morally neutral. They may not lend themselves well to a profitable business model, but they serve as a bastion of past culture.

Few museums have the resources of New Jersey’s Liberty Science Center, which just completed a $109 million renovation, setting a new standard for science museums around the world. But even without vast sums of money, many things can be done for little or no money.

Significant opportunities await the museums that master the new game of relevance, and that isn’t always about money.