The Threat of a Jobless World 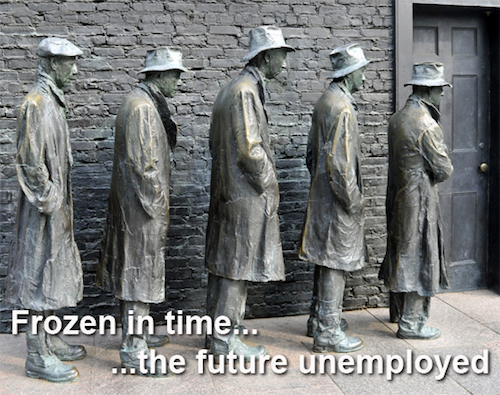 People are seriously worried. I’ve been in a number of conversations recently where people are very worried about our coming era of automation where fewer and fewer jobs will be left for people to do.

A few months ago I predicted that over 2 billion jobs will disappear by 2030. With technologies like driverless cars, robotic assembly lines, and teacherless schools on the horizon, the handwriting is on the wall and people are getting nervous.

At the same time, our best thinkers don’t seem to have good answers for what comes next. Our best colleges are training students for jobs that will no longer exist. Our business leaders are myopically focused on what’s best for them. They have an obligation to hire the fewest number of people they can get away with, and to trim staff and expenses wherever possible. And politicians don’t know what to think because there are no lobbyists for the future unemployed.

With all the chaos and uncertainty of a workerless world looming, I’d like to step you through some of the reasons why it will not be as bad as the doomsayers are predicting. 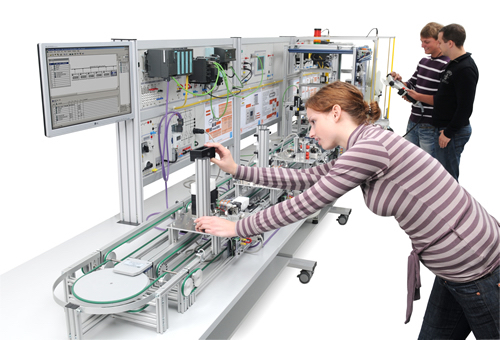 This is an important factor to understand because as this happens, our social structures will begin to operate with a different set of rules.

If you can imagine a world with only one person, there is no economy because there is no one to trade with. In a world with two people, there is a very limited economy resulting from the trading back and forth between the two.

So is the economy in a world with 100 people 50 times more than the world of 2? Actually it’s exponentially greater because of all the options for trading back and forth.

Theoretically, a world with 9 billion people in it will be far greater than one with 6 billion. The Internet is dramatically improving our trade channels, and as a result, improving our economies.

The Three Laws of Automation Parity

As we think about the growing number of machines in our lives, we need to consider how our relationship with them will morph and change.

Yes, there are many scary sci-fi movies where the machines somehow gain magical human-like qualities and start killing humans. But in the real world, where we already have so many problems that we don’t have to fabricate new ones, machines are still very much dependent upon humans.

The automations that we see eliminating jobs today, are all being developed “by humans for humans.” Their primary purpose is for personal gain.

Automation, in many cases, will replace money as the tool of choice for our power elite.

In much the same way that people use weapons to destroy other people, automation and machines in the wrong hands can be a very destructive force.

It’s easy to start viewing automation as a silent killer, much like an Ebola virus for jobs. But in the end, there are always humans directing the effort, and humans benefiting from the destruction.

Once we cut through the slight-of-hand misdirects, we begin to see the real wizard behind the curtain.

Knowing that it’s nothing more than a human vs. human game, we can begin to see the limitations of our own actions. For this reason I’ve created the “Three Laws of Automation Parity” to help guide our thinking about this future threat.

NOTE: Since this is my first discussion on this topic, I’m very likely missing key points. I would invite you to let me know where I’m off base and add to this conversation below.

1.) The Law of Human-Automation Equilibrium

As we move into a future dominated by automation and technology, it’s important to understand that people still drive the economy. If people become unemployed and lose their income, they also lose their purchasing power. And when large numbers of consumers lose their ability to consume, the whole economy suffers.

Whenever the proper balance between humans and automation drifts too far into the automation camp, an economic backlash will occur.

Automation is a tool of the power elite, and the number of people who are controlled by it is a key ingredient of the power formula.

As an example, people who control the cellphone industry are far more powerful if a billion people are using their devices, than if only a million are. Consequently, when people can no longer afford their phones, or don’t like the devices, it directly affects their sense of power.

Yes, certain people are willing to win at any cost. For them, the carnage and destruction that follows is easily dismissed with comments like “I can’t help it if they were too stupid to hang on to their job.”

However, even the most ruthless have empathetic family members. And one of their greatest fears is often having people despise them after they’re dead. Their legacy is hugely important, and even though they want desperately to win, they want to leave on a positive note.

2.) The Law of Diminishing Returns

The simple task of cleaning involves tens of thousands of nuanced decisions to formulate an appropriate response. As an example, walking in to clean your grandparent’s attic, every object has an emotional value that is used by you to sort, organize, and discard the objects in front of you.

The complexity of this type of decision-making is not easily transmitted to an emotionless machine. Even if this technology could be developed, it would likely not be used because it interferes with a critical component of our humanity.

Another important example is in the field of healthcare. Human to human touch is not easily replicated. We like being around others, and when someone is hurt or injured, the need for human interaction increases

Yes, we will automate many aspects of the field of healthcare. But we will find it prohibitively expensive and complex to automate past a certain point.

The Law of Diminishing Returns is the barrier we, as humans, will naturally resist crossing for reasons we can’t always explain.

3.) The Law of Overestimating Capabilities

Seven years after the Wright Brother’s inaugural flight in 1903, Waldo Waterman built the first flying car. It was a logical extension of the airplane and people could instantly see the efficiencies that could be gained with a flying car. Now, 102 years later, we have little more than museum pieces to show for our flying car efforts.

In 1947 Dennis Gabor invented holography, a technology that he would later receive the Nobel Prize for in 1971. We are now celebrating the 65th anniversary of a technology that never materialized in the way he imagined it.

In 1950, computer visionary Alan Turing imagined a world where computers could think and respond like humans. Now, 62 years later, we have yet to pass his infamous “Turing Test.”

It’s easy for us to see a new technology in a movie and extrapolate the speed of adoption and the impact it will have. But one of our biggest mistakes is over simplifying the process for getting there.

Every problem creates an opportunity and as the numbers of unemployed rise, this too becomes another entrepreneurial opportunity.

We are entering an unprecedented era where all of the rules are about to change. We won’t be able to trust our instincts or many of the things we’ve traditionally been able to count on.

Over the coming decades we will indeed see many jobs go away, and it will be up to up to devise better systems for rapid job creation.

Sometimes it takes reaching a higher pain threshold before we are willing to make the changes necessary. Look for many of these pain thresholds to peak in the near future as we dip our toes in our next era for humanity. That’s when things will get very interesting.