Turmoil Ahead for the Automotive Industry 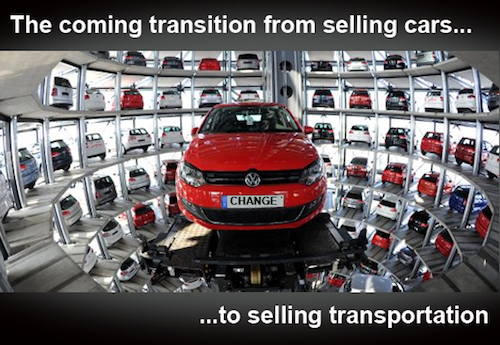 By his definition, planned obsolescence was “instilling in the buyer the desire to own something a little newer, a little better, a little sooner than necessary.”

Over time, planned obsolescence has become a commonly used term for products designed to break easily, and our cars have become the product that most consumers associate with this business practice.

Regardless of whether its true, the perception exists and the automobile industry has done little to change it. Naturally, shortening the replacement cycle has its supporters as well as its critics.

But the idea of replacement cycles will soon change as we enter the driverless car era, as automobile companies make the transition from selling cars to selling transportation.

Here’s how I see this transition unfolding.

The age of the average car on the road in the U.S. is now at an all-time high, nearly 11 years old, according to the latest statistics from R.L. Polk Co.

The auto industry wasn’t paying attention when this change started happening. Older generations have been conditioned to think that cars start to fall apart after four or five years, and consequently traded cars far more often than necessary. Twenty years ago, new cars were relatively cheap and credit was easy to get, so why should anything change.

This attitude helped feed a booming leasing era that started in the 1990s. With leasing, the customer only borrows the difference between the upfront cost and the residual value of what the car will be worth at the end of the lease.

Leasing became an easy way to take home more car for less money, but the downside was that the car never got paid off. Before the recession the auto industry was booming.

The Scenario – Ten Years into the Future

The year is 2022 and the automotive industry is on the verge of a major transformation. Even though the industry has been growing steadily over the past decade, and little has changed so far in the nature of personal vehicle transportation, the telltale signs of rapid transformation are showing up everywhere.

At issue is a plan published a year earlier by Toyota that proposed a foundational shift in the industry, a plan for making the transition from “selling cars to selling transportation. “

While this may have seemed like a subtle play on words to the casual outsider, it has the potential to dramatically alter the automobile industry in ways that most are still not able to grasp.

In 2005 the DARPA Grand Challenge created a competition for designing the world’s first driverless vehicle capable of driving 132 miles through the deserts of western U.S. with no human intervention. The winner was the team from Stanford University.

Encouraged by their first success, a second competition was staged in 2007, the DARPA Urban Challenge, to prove robotic vehicles could drive themselves through a city, which was won by Carnegie Mellon University.

As a result, the driverless-car era was born, first with experimental vehicles in R&D labs around the world, but later with well-designed production models.

In 2018 the first widely available models of driverless car hit the market. While it looked and functioned like a traditional vehicle, it gave drivers the ability to input a destination, sit back, and let the car calculate out the best route, based on traffic, and perform all of the normal driving functions to take passengers to their destination in a smooth, relaxing environment.

Driverless cars all use a common “Autodroid” operating system, developed by Google, so vehicles can do a better job of communicating with each other, while constantly mapping the ever-changing road conditions.

The past four years have seen a large number of these vehicles sold, but as a percentage of the overall car population it represented only a small sliver. But consumer demand was growing quickly, and more importantly, people have been shifting their thinking about the role of the automobile in their daily life.

The Toyota Plan issued projections that over the next 20 years, most consumers will adopt a “transportation-on-demand” lifestyle where, much like hailing a cab, people will use their mobile devices to summon a driverless vehicle whenever they needed to travel somewhere. Without the cost of drivers, this type of transportation is expected to become infinitely more affordable, for most people, that owning a vehicle themselves.

So rather than buying their own car, and taking on all the liabilities of maintenance, upkeep, and insurance, consumers will begin to adopt the lifestyle of simply purchasing transportation as needed.

As the transition is made to driverless vehicles, combined with the shift to the transportation-on-demand lifestyle, the number of vehicles sold will begin to decline. And a growing percentage of total sales will be to large fleet operators who are offering the “transportation on-demand” service.

In response to declining car sales, the automotive industry will adopt a “selling transportation” model where, rather than “selling” cars to large fleet operators, car companies will begin charging a nominal per-mile charge.

Fleet operators will love the arrangement because there will be no large up-front purchase price, but instead, only a small monthly fee based on the number of miles driven.

As the sale of cars begins to decline, the automobile industry will start to design and manufacture cars capable of driving over 1 million miles. By collecting a small per-mile fee over the life of a million-mile car, automobile manufacturers will have the potential of earning ten times as much, per vehicle, as they do today.

This will mean all car parts and components will need to be designed more durable, longer-lasting than ever before. Both quality and design standards will be pushed to new levels.

Many of the ancillary businesses in the auto industry will not find the above scenario very appealing. In an industry that has been driven by “unit sales” for over a century, a shift of this nature will leave many out in the cold.

At the same time, a transportation industry with vehicles on the road for longer periods of time will spawn entirely new industries.

Maintenance and repair will still need to occur, but these will no longer be customer-facing businesses. Driverless cars will cause a move towards a more automated system for routine upkeep.

In remote areas, where few people live and the efficiencies of on-demand no longer make sense, new kinds of transportation services will spring to life.

Niche businesses will spring to life that specialize in the “rider experience” now that passengers no longer have to focus on the task of driving.

Automobile transportation has become a very pervasive part of global culture, and the U.S. will strive to remain at the forefront of this next generation of the industry.

Ten years ago, Scott Thompson, a rising star at Visa who later became CEO of Yahoo, was pushing the idea of universal commerce. In his way of thinking, universal commerce was a technology capable of turning any device into a payment device.

So instead of Nikon or Cannon selling “cameras,” they could sell “photography” by charging a small fraction of a cent for every shutter click. Cameras could be given away for free and the companies would make more money by charging for photos taken than for the camera itself.

Similarly, printer companies like Hewlett Packard and Lexmark could start selling “printing” instead of “printers.” Rather than charging for the machines and the ink, they would charge for each page that is printed.

In this type of arrangement, companies would compete on the price of output instead of price per unit. As a result, design teams would be driven to create devices that lasted many years as opposed to some “planned obsolescence” schedule that encouraged throwing out old equipment in favor of buying something new.

Details of usage for both the cameras and the printers would be transmitted wirelessly to the companies so they could send their customers a monthly bill.

However, this whole idea begins to fall apart in a field where technology is changing quickly. In a consumer product marketplace, where innovation is happening swiftly, and pricing is very competitive, the rapid changes discourages long-term thinking. Even though the equipment would last far longer, it would be too easy to throw away “dated” equipment when something new comes along.

But the auto industry has different forces at play. The average life of cars on the road today is nearly 11 years and growing. People don’t “throw away” cars like they do cameras and printers.

Once we find ourselves as passengers instead of owners, our attitude will change. We will find ourselves far less concerned about the efficiency of the vehicle, and whether it has a great paint job, or whether it makes the right statement. Yes, there will still be niches of people who care about these things, but much like catching a taxi, the focus will be far more on getting from point A to point B, rather than how it will look in our garage.

I’m sure I’ve just scratched the surface with this line of thinking, so I’d like to hear your thoughts. What have I missed, and when and how will the industry “zig left” when I’ve projected they will “zig right?”

There are many variable at play, which makes forecasts of this nature rather precarious at best.

In any case, the next two decades will prove to be an exciting time to watch as industry players rethink strategies and rewrite playbooks for our unfolding future of transportation.