Visionaries Wanted – No Need to Apply, Just Do It 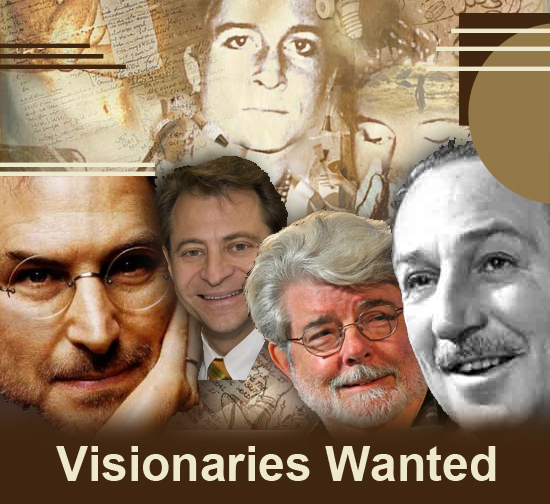 If Steve Jobs had never lived, would we still have the iPhone and iPad today? Similarly, if Walt Disney, George Lucas, and Pete Diamandis had all taken jobs on Wall Street instead of living their lives as true innovators, would we still have Disneyland, Star Wars, and the X-Prize Foundation today?

To put it more succinctly, if the visionary never existed, would we still have the industry?

Certainly, if Edison hadn’t invented the light bulb, someone else would have. In many cases, inventors have lost out on a patent because of mere minutes separating the timestamp on a patent. So the invention was destined to happen regardless of whose name showed up on the patent, right?

The systems we create help define the kind of people who will naturally rise to the top. And these leaders of innovation have decidedly different approaches for making things work. So what would a new system for innovation look like?

At the DaVinci Institute we have some ideas for a new system brewing, one that will serve as an enabler for a new breed of visionaries. Over the coming weeks I will explain in far more detail, but for now, here is a rough overview:

People’s lives hinge on a few key decisions they make along the way. Consider the following scenarios:

Scenario 1: If Judge Harold Green hadn’t broken up AT&T, would we ever have gotten to the point of having an Internet?

The move toward the Bell breakup was well underway before Green had been appointed to his position as breakup czar. But a Harold Green orchestrated breakup was far different than one with someone else calling the shots.

Left to its own devices, AT&T would have never allowed an Internet like we have today to exist. Even though all of the technology existed, without the unique set of circumstances that began to unfold in the early 1980s, an AT&T-led Internet would have been far more expensive and far slower in its evolution.

To be fair to AT&T, we would have eventually gotten there, driven primarily by foreign competition, but at a much later date. At the same time, we would have never had problems with spam, hacking, identity theft, and other negative issues tied to the Wild West days of early Internet development. (Incidentally, we are still living in those Wild West days.)

Scenario 2: If Werner von Braun had known about the Space Elevator in the early 1900s, would we have one in use today, or at least be a few years closer to reality?

Even though Russian scientist Konstantin Tsiolkovsky wrote about the main concepts for a space elevator in 1895, it wasn’t until Arthur C. Clarke’s 1979 novel, “The Fountains of Paradise” that the core ideas received any serious consideration.

Tsiolkovsky was inspired by the Eiffel Tower in Paris and visualized a tower that reached all the way into space, built from the ground up to an altitude of 22,238 mile to achieve geostationary orbit.

Werner von Braun, on the other hand, was far less of a nutjob dreaming about impossible structures, but in an influential position of science where even seemingly outlandish ideas would have received a fair hearing.

Scenario 3: If Linus Torvalds grew up being trained as a mechanical engineer instead of a software engineer, would he have started an open source movement for robots?

If Linux-thinking were applied to robots, the logo may very well have turned out to be a mechanical penguin.

Can open source apply to something mechanical? Certainly the rules would be different, but a movement like this may have spawned a personal robotics movement that few, if any, can imagine.

Most of my life I’ve felt like I’ve been just a few robots short of a full team. You too?

The Need for a New System

I have just stepped you through some rather unusual “what if” scenarios to demonstrate a couple key points.

First, it is the systems that we use that determine the characteristics of an individual who will rise to the top. Our systems also determine what kind of innovations will be allowed, how they get funded, who gets to participate, and who gets to benefit.

Second, it’s not straightforward. Innovation is virtually never linear and often the result of bizarre happenstance and non-reproducible circumstances. This naturally begs the question, “Is there a better way?”

The last point I’d like to make is that we are blinded by what we see and cannot imagine the opportunities that never materialized. When we ask the question, “What’s missing?” we are left with only vague assumptions about what might be a good fit for the white spaces surrounding the world we live in..

We can only guess at how life would be different if the atomic force microscope had been invented 50 years earlier, or the Space Shuttle Challenger had not blown up in 1986, or if the visionary artillery engineer Gerald Bull had actually figured out a way to “shoot” satellites into space.

Credibility Shifting from Gatekeepers to the Masses

Until recently, most new ideas were never given serious consideration unless they came from a credible source. Today, the credible source is being replaced with the weight of the crowd. To be sure, credible people and organizations still exert considerable influence. But the hewn cry of 10,000 voices can often be used to even greater effect.

The missing ingredients today still include elements of influence, credibility, and that all-important piece that comes next – collaboration.

Ideas are still easy to come by, but influence remains in short supply. The credibility associated with the masses is gaining respect and attracting far more attention.

Here are the three elements of the new kind of system for innovation we’re working on:

1.) Certified placeholder. Everything starts with a place to register the initial idea. It may begin as a crude description, a few diagrams, or a video of you talking through the basic concepts, but it will serve as a good starting point. The placeholder is a key missing ingredient in today’s system because most ideas tend to get tucked under a mattress for later consideration, with most getting permanently lost in the underbelly of mattress-life.

2.) Anchor point for collaboration. Once the idea is registered, the fun begins. A well-anchored idea will morph and change and evolve as others begin to add to the body of work being created. Visions invariably will change over time, but we are hoping to accelerate these changes in a positive way.

3.) Global sounding board. Most of us have been conditioned to think that any good idea needs to be protected. At the same time, most ideas are not very good until they’ve been aired out, vetted, and put into some workable form.

Very few ideas, somewhere in the range of less than a fraction of one percent, actually have value without the input of others.

Human nature has given us a single point of view, and without the vantage point of multi-brain clairvoyance few of us are ever able to grasp big picture opportunities.

And here is the best part. It won’t be free.

What? Did I hear you correctly?

That’s right. Ideas need friction to prove their value, and over time a great idea will endure tons of friction. So by adding a little friction at the beginning we set the stage for what comes next.

We currently have a team in place at the DaVinci Institute working on this new system for innovation. What I have mentioned so far glosses over many of the key elements that will make it work. These elements will only become clear in our own minds once we’ve been able to test-drive the concepts and add multi-person perspectives to our assumptions.

So at this point we don’t know what the final offering will look like. But what we do know is that it carries a tremendous amount of energy buoyed by the vision of opportunity.

We will keep you posted as details unfold.