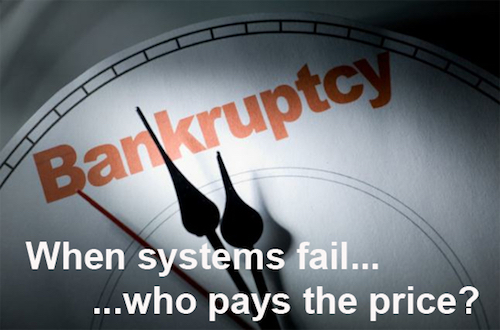 In December 2006, Britain made its final payment of $84 million on a $4.34 billion loan from the U.S. that was made all the way back in 1945. Germany wasn’t the only country to go bankrupt after WWII. This money allowed Britain to stave off its total collapse after devoting almost all its resources to the war for over half a decade.

To put this in perspective, $4.34 billion in 1945 is roughly equivalent to $140 billion today, an amount that was double the size of Britain’s economy at the time.

Had the U.S. not made this loan, the British economy would have been thrown into a tailspin, causing huge implications, not only to the UK, but also to countries around the world.

Today we see a number of nations on the verge of bankruptcy. But what does this mean for our global economy with heightened awareness of every micro-decision, and fluid capital markets that can react to virtually every whim?

To be sure, many countries have gone bankrupt in the past, and many more will default in the future. So who’s next, and what kind of problems will a nation’s insolvency cause?

What happens when a nation goes bankrupt?

When a country goes bust, the pain is felt on very deep levels. The most basic systems and institutions that people have come to depend on simply disappear. Power companies stop operating, the police stopped working, gas stations close, grocery stores run out of food, postal workers stop delivering mail, retirement checks stopped coming, and banks close their doors with bankers fleeing the country, taking people’s life savings with them.

This is what happened in Argentina in 1999.

Argentine president, Carlos Menem, bought into some of the IMF’s latest thinking about how an unrestrained capitalist market would be the ultimate recipe for success. However, without proper checks and balances, businesses will thrive at the expense of the country, and the general population will suffer.

In Argentina’s case, wealthy people took their money and fled the country. Over $40 billion left the country in one single night. This resulted in a run on the banks, followed by a collapse of the country’s national currency. Argentina’s citizens were so desperate and panicked that many spent nights sleeping in front of the automated teller machines.

In reaction to this, the government froze all bank accounts for one year, only allowing people to withdraw minor amounts of $250 per week.

In December 2001, confrontations between the police and citizens became a common sight, and fires were set on some of the main roads in Buenos Aires. President Fernando de la Rúa declared a state of emergency, which just led to more conflicts and turmoil.

Many private companies were also affected by the crisis. Argentine Airlines, as an example, was hit hard, and forced to stop all international flights, on several occasions in 2002. They came close to bankruptcy, but managed to survive.

The unemployment rate soaring to nearly 25%

An estimated 30,000-40,000 of the newly homeless and jobless survived by scavenging the streets for cardboard to eke out a paltry living by selling it to recycling plants.

Many barter networks cropped up to compensate for the widespread shortage of cash, and large numbers of people began to rely on them.

Argentine products were rejected by some countries, for fear they might arrive damaged or in poor condition.

Agriculture was also affected. The USDA put restrictions on Argentine food and drugs arriving at the United States.

Producers of television channels were forced to produce far more reality TV shows because these were so much cheaper to produce. Virtually all education-related TV programs were canceled. 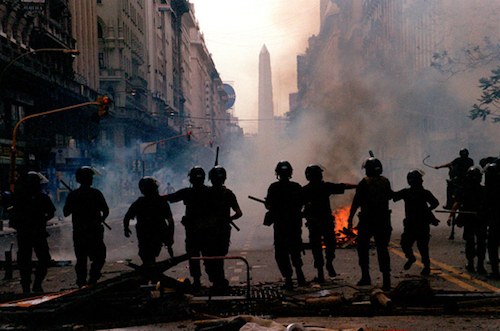 A 2004 documentary titled “The Take” by Avi Lewis and Naomi Klein does a great job of capturing the people’s movement in Argentina to regain control of their failed country.

“In the wake of Argentina’s dramatic economic collapse in 2001, Latin America’s most prosperous middle class finds itself in a ghost town of abandoned factories and mass unemployment. The Forja auto plant lies dormant until its former employees take action. They’re part of a daring new movement of workers who are occupying bankrupt businesses and creating jobs in the ruins of the failed system.

But Freddy, the president of the new worker’s co-operative, and Lalo, the political powerhouse from the Movement of Recovered Companies, know that their success is far from secure. Like every workplace occupation, they have to run the gauntlet of courts, cops and politicians who can either give their project legal protection or violently evict them from the factory.

The story of the workers’ struggle is set against the dramatic backdrop of a crucial presidential election in Argentina, in which the architect of the economic collapse, Carlos Menem, is the front-runner. His cronies, the former owners, are circling: if he wins, they’ll take back the companies that the movement has worked so hard to revive.

Armed only with slingshots and an abiding faith in shop-floor democracy, the workers face off against the bosses, bankers and a whole system that sees their beloved factories as nothing more than scrap metal for sale.”

In the middle of all the chaos, a few brave souls managed to find a new way to make things work. Desperate time require desperate measures, and the good people of Argentina were indeed desperate.

Iceland, a tiny country with just under 320,000 residents, was the first domino to fall in the 2008 global financial meltdown, when its banks defaulted on $85 billion.

Iceland was hit harder by the crisis than many other countries because of its inflated banking system. In just five years, the banks went from being almost entirely domestic lenders to major international financial intermediaries.

Unbeknownst to most of the population, the country basically turned itself into a massive hedge fund. The whole nation was caught up in a web of deception.

In a matter of weeks after the banks’ collapse, the unemployment rate jumped to 10 percent, house prices fell, the currency plunged and inflation surged.

But Iceland used a different rulebook than Argentina.

They refused to bail out the banks and jealously guarded, and even expanded, social programs. This may represent a model for other countries facing a similar calamity in the future.

Just over three years after Iceland’s economic implosion, the country is showing strong signs of recovery.

Factoring in a Declining Population

Labor demonstrations are almost a daily occurrence in southern European cities. Demonstrators decry the austerity measures and budget cuts being imposed on them.

However, one of the biggest factors affecting these future economies will be their declining population base. They are sitting on a demographic decline that, if not soon reversed, all but guarantees the continent’s downward slide.

Spain, once one of Europe’s economic superstars, rose to the top largely through real estate speculation and its growing assimilation with the rest of the EU. As little as six years ago, the country was building upwards of 50% as many houses as the U.S. while having 85% less population. Roughly six million immigrants came to work in Spain during the boom times.

Countries like Greece, Italy, Portugal and Spain have not developed strong economies to compensate for their fading demographics. When the real estate bubble broke, there were few industries to step in and fill the gap. 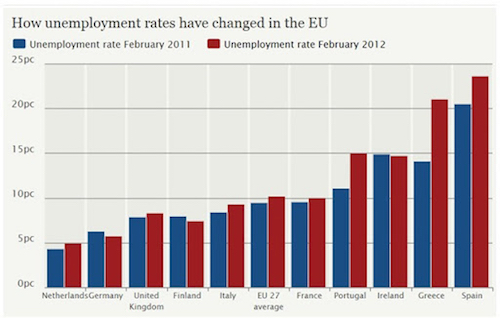 Spain’s unemployment rate has climbed to over 23%, more than twice the EU average. Unemployment among those under 25 in both Spain and Greece is now over 50%.

A generation ago Spain was a strongly Catholic country with among the highest birth rates in Europe, with the average woman producing almost four children in 1960 and nearly three as late as 1975-1976.

With an increased number of women in their childbearing years, the population is now higher than it was in 1975, but the number of marriages has declined from 270,000 to 170,000 annually.

Unlike Sweden or Germany, Spain cannot count on immigrants to compensate for their demographic decline. Although 450,000 people, largely from Muslim countries, still arrive annually, over 580,000 Spaniards are leaving for places like northern Europe and Latin America.

At this rate, projections show that the Spanish population will decline from its current 47 million to just over 35 million by 2060.

Their declining population coupled with a growing number of young people leaving and an overall aging population will mean a far higher “dependency rate.” The dependency rate is the number of people working in proportion to the people dependent upon them. Projections show that in Spain, by 2021, there will be six people either retired or in school for every person working.

Yes, it’s counter-intuitive that a declining population base will lead to higher unemployment, but the current financial crisis is upending conventional thinking.

Corporations don’t want to entrust their future to an unstable country with weak finances. So jobs that would have materialized during a good economy have gone elsewhere.

The unemployment rate is a very good indicator of which countries will go bankrupt next.

If you think we are past the point of more country’s going bankrupt, think again.

Most national bankruptcies are like Bernie Madoff on steroids. What once seemed like a good investment suddenly turns into a giant ponzi scheme with the working public footing the bill.

The problems become exacerbated when there are fewer people working and many more retired.

The growing crisis in Greece, Spain, Portugal, and Italy are but the tip of a much larger iceberg.

The question then becomes a matter of how the problems are dealt with.

Do they deteriorate into something tantamount to a civil war, like what happened in Argentina? Or can they be handled in a more civil manner like Iceland?

And how do the modern communication systems we have on the Internet factor into this equation?

Social networks like Twitter and Facebook all heighten awareness, and countries close to collapse have already begun to experience a brain drain, with the most wealthy and talented moving to more stable communities.

In today’s fluid environments, people and resources can react instantly to any adversarial conditions. So if taxes go beyond a certain pain threshold, people will simply fold their tent and move elsewhere.

Those left behind will feel trapped, and as a result, will become very angry at the situation. This anger will be channeled towards any person, company, or entity they feel is culpable in the matter. In most cases, this will be banks, financial institutions, and government officials.

With the fester mood ramping up in Europe, and the current attitude toward imposing hardships on the people of a country for the improprieties of a few, this will not end well.

The next chapter in global unrest is about to begin, and for the growing ranks of the unemployed, this will become their new occupation.

← Transforming the Future of the Insurance Industry 56 Future Accomplishments: Waiting for Someone to go First →