When Wikipedia No Longer Matters 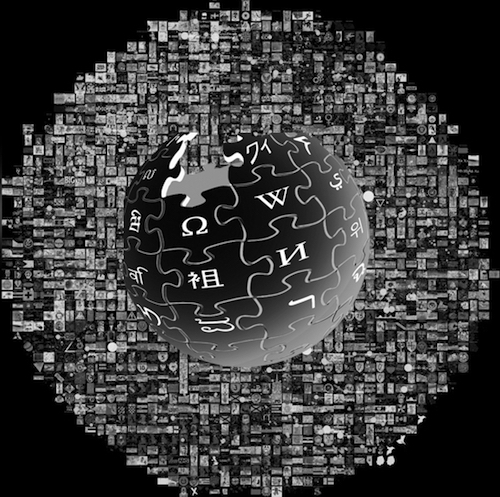 At what point will Wikipedia no longer matter? I’m going to go out on a limb here, but I predict a competitor will emerge to steal the majority of both mindshare and eyeballs from Wikipedia within the next ten years.

No, I’m not saying this because they don’t have a sustainable business model, and no, it’s not because the information on Wikipedia is not credible. Rather, they, like the encyclopedias they helped put out of business, will be upended by a company with better ways of aggregating information. They too will become irrelevant.

This may seem rather ironic to predict the demise of the world’s best known crowd sourced encyclopedia at the same time most people are finally recognizing the value and utility of its content. Yet it is their overarching pursuit of perfection and internal drive for credibility that will be their undoing over the coming years.

At the DaVinci Institute, with the help of our CU student intern David Baur-Ray, we began a series of Wikipedia research projects to uncover “what’s missing,” and the results are very telling. Two of the tests showed well over 50% of important content entries either missing or incomplete, and by another measure, over 95% missing.

Missing content is in direct correlation to the relevancy Wikipedia will hold in the minds of people in the future. It is also a clear signal to startup entrepreneurs that a new opportunity awaits. Here’s how I came to this conclusion.

Started in 2001 by Jimmy Wales, Wikipedia is now in its 10th year of operation with the number of articles in its 10 primary language versions approaching 10 million entries. They represent the 4th largest web property on the Internet attracting 150 million unique visitors a month.

Recent headlines would seem to indicate the exact opposite trend to what I am predicting. Here are a few recent ones:

With doctors, educators and the UN staffers listing themselves as avid users, it’s as if the world has finally woken up to the inherent value of Wikipedia as a solid source of information.

But perhaps the most telling sign that the end is near comes from the last one. When the perennial late-adopters in academia start to recognize its importance, it’s a clear sign that Wikipedia has lost its ability to continue as a disruptive enterprise.

In the constantly changing tombs of Wikipedia, now boasting over 1 billion individual edits to the entries, the question we were confronted with was, “How can we apply relevancy metrics to this type of business model?”

So we devised a series of unique tests to see how well Wikipedia is able to keep up with the times. Here is what we found.

We began with the question – “Who is the most famous person in the world who is not listed in Wikipedia.”

Naturally there are many ways to rate fame, but we decided to look at the most avid Twitter users on Twitaholic.com and listed the top 400 ranked according to their number of followers.

Using this as our criteria, the most famous person not listed in Wikipedia is Noah Everett (@noaheverett), founder of Twit Pic, ranked number 66 on Twitaholic with 2,448,297 followers on Twitter. (NOTE: Since these rankings and numbers are constantly changing, this was a one-day snapshot.)

Out of the top 400 people on Twitaholic, 18 were left out completely and another 9 only had brief mentions. This means 6.5% of the entries were missing.

As another measure of important people with missing entries, we made a list of the last 200 people who appeared as speakers at TEDx events around the world. This was a random selection that included of all the people in sequential events until we reached 200. This group is important because people chosen to speak at these events have achieved sufficient notoriety to warrant their selection by an event committee.

The results showed that 41% of the entries were missing, 15% were incomplete, and 44% had full entries.

As a 3rd test, we checked the list of Fast Company Magazine’s “100 Most Creative People in Business” to see if they had entries in Wikipedia. Once again this was an important list because the people selected have achieved a certain level of significance in the minds of editors at Fast Company Magazine.

The results showed that 54% of the entries were missing, 13% were incomplete, and 33% had full entries.

The fourth test was a simple comparison we did with LinkedIn and Facebook. Wikipedia is now nearing 10 million entries and we are estimating less than half are entries for people, so less than 5 million. By comparison, LinkedIn has over 100 million entries for its members, and Facebook is now closing in on 700 million members. (NOTE: We were not able to find a reliable source for the number of “people entries” in Wikipedia)

Using this rough estimate, entries in Wikipedia represent less than 0.07% of the world’s population, less than 0.7% of Facebook’s members, and less than 5% of LinkedIn’s base. This means that only a relatively small percentage are worthy of being listed on Wikipedia.

Gatekeepers Alive and Well at Wikipedia

Early on people were very skeptical of whether they could trust the information they read on Wikipedia. Educators and editors on every level harbored a strong distrust of information that anyone could post.

For this reason Wikipedia set out to become credible and they implemented a number of procedures to add rigor and validation to every entry. They removed any entries that seemed frivolous or self-serving, and in doing so, they created an invisible league of gatekeepers, not unlike what you’d find at top newspapers, to determine the worthiness of every post.

During the early years, volunteers who found writing and editing for Wikipedia to be the worthy cause missing from their life showed up in droves. But once too many rules and restrictions came into play, the fun had vanished and it started feeling like work again.

According to a 2009 article in the Wall Street Journal, “More than 49,000 editors left Wikipedia’s English-language edition during the first three months of 2009, compared with only 4,900 for the same quarter a year earlier.”

The article went on describe how arguments over various articles have also taken their toll. “Many people are getting burnt out when they have to debate about the contents of certain articles again and again,” and “the rules often trip up new contributors who find their content removed without understanding why.”

Wikipedia by the Numbers

According to comScore Media Metrix for the month of April 2011, Wikipedia served up slightly over 2 billion pageviews to 149 million unique visitors, and each stayed on average of 11.8 minutes per visit.

In terms of content, Wikipedia worldwide has a combined total of more than 1.74 billion words in 9.25 million articles in approximately 250 languages. That said, growth is beginning to decline. 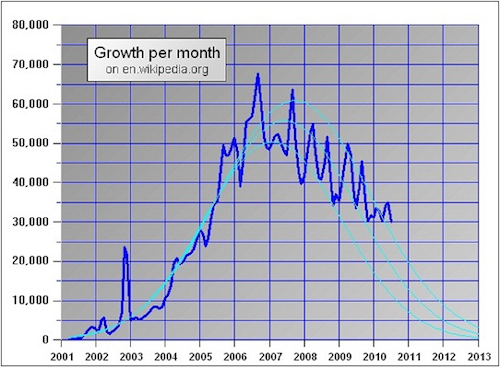 According to Wikipedia’s own statistics, growth has been slowing since 2006. 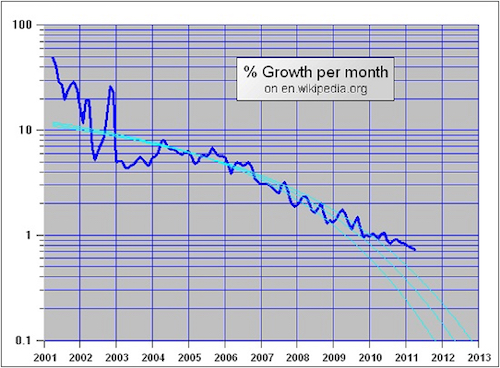 As growth continues to slow, it becomes easy to see a point where content begins to stagnate and the company as a whole begins to lose relevance. This will be especially true if and when a viable startup model emerges and begins to steal mindshare from its current user base.

Entries in Wikipedia are still very U.S. oriented. While they boast articles in 250 different languages, the majority are still in English. And with 6,500 known languages in the world, the 250 current languages still leaves vast populations, regions, and cultures untapped.

However, that wasn’t the only omission.

As our researcher David Bauer-Ray worked his way through the lists he commented, “It seemed like I could always find an entertainer (e.g. musician, filmmaker, actor, singer, author, or artist) but it was less consistent to find an entrepreneur, founder, CEO, or educator. This concerns me because it suggests the priorities of Wikipedia are rather backwards when assessing pragmatic importance to society.”

Another trend in the lists was the number of Brazilian personalities that Wikipedia doesn’t recognize. As we were able to glean for other comments, they haven’t done a good job of establishing themselves in South America.

If everyone had their own page on Wikipedia, would it become more relevant or less?

Like so many of the king-maker information sources of the past, Wikipedia has decided on a rather high bar for entry. With legions of invisible editors poised as gatekeepers in the background, getting a new post published today is little different than getting an article in the New York Times or Washington Post.

A business model with these kinds of restrictions works well for premium products or exclusive clubs charging top dollar for admission. But it seems like a confusing strategy for a free information site with no tangible benefit to be gained from “culling the herd.”

We live in a world full of information objects that can theoretically be written about. The competitor that replaces Wikipedia will likely have a far more expansive offering in the form of a fully unrestricted encyclopedia.

Using a more expansive view of the information world, the ultimate encyclopedia may include:

The posting of this information will naturally have to be contingent upon the consent of the individual or owner of the content. Undoubtedly new rules will come into play as conflicts arise.

My sense is that Wikipedia is run as a very sparsely staffed organization managing legions of undisciplined volunteers. They have finally gotten a handle on running the operation they currently have, but expanding it exponentially to include everything described above is not something that they could even consider.

For this reason I deem it highly likely that a competitor will emerge over the coming years to steal their market.

← Inventing the Rocking Chair Tree The Rise of the Cause-Architect →