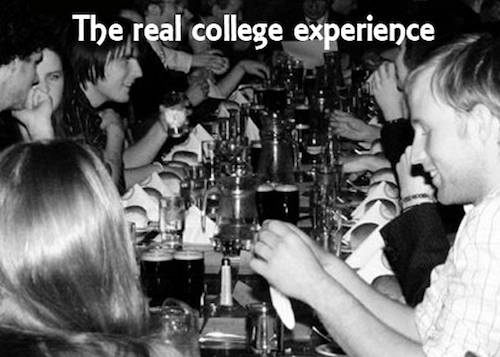 NOTE: The following is the second in a four part series title: The Future of Colleges & Universities:  Blueprint for a Revolution

Colleges and Universities carry with them considerable inertia. They have long-standing traditions, huge alumni networks, solid brands in the minds of consumers, and are more durable than corporations with many having lasted centuries and still going strong. Most have integrated themselves into their respective communities with multiple funding tentacles, many with massive State-funded budgets, and others with intense fundraising operations that extend around the world.

People attend colleges for many reasons including a desire for a better job, a sense of personal accomplishment, to improve their resume, status and prestige, build relationships, and to have fun. However, all of these reasons boil down to one overarching motivation – a quest for a better life.

Over the years colleges have evolved from a simple place of learning into a vast array of experiences. In reality, classrooms and teachers are only a tiny portion of attending college. Touch points for the college experience include:

Ironically though, most of these touch points have been downplayed as “all that crap that happens outside the classroom.” College friends, parties, social events, and all the other “stuff” provides many more of the ingredients for college being a life changing experience than all the fact-cramming lectures could ever hope to achieve. Yet credits are only given for completed courses.

Typically, young people begin the process at age of 18 and exit between the ages of 22-24. As they leave, they are not only better educated, but also more mature, with a new circle of friends, and a cadre of stories that will frame their thinking for the rest of their lives.

Over the years, the “rules of the game” have been erroneously written to exclude the value of the experience, thereby giving undue advantage to both low-cost and minimal-experience providers. Students are simply asking, “What’s the quickest way to get a diploma?”

The Value of the Struggle

The college process today has been designed around helping students transition from coddled family life to contributing members of society, self reliant and confident in the choices they will make.

They graduate with a complex set of experiences that have taken place against a backdrop of scholarly moments in a classroom.

This quest to achieve greater understanding cannot be achieved by simply reading books and taking courses. It can only be realized through the struggles involved in a personal journey – a journey that requires far more than cognitive reasoning, but a grasp of the situation combined with skepticism, deductive interpretation, complex problem solving, and much more.

There is great value in the struggle. Those who do not struggle gain only surface knowledge to ply forward.

Enduring some of life’s greatest challenges can generate far more wisdom than 10,000 books on the subject. Is learning about famines ever as good as personally experiencing one? Is a class on bankruptcy and foreclosure ever the same as having personally experienced one? An individual who has to personally fought their way through a lawsuit, a bank failure, corporate mutiny or dramatic downturns in business derives far more valuable experiences than any textbook synopsis. Yet no institutions currently grant credit for this type of experience.

An Institution under Attack

While only a few leading-edge indicators are giving off signals, colleges are under attack. To the big institutions, the attacks only seem like irritating mosquitoes providing more of an annoyance than anything serious to be concerned about. But rest assured, a relentless wave of seriously larger mosquitoes are now airborne.

Much like Henry Ford’s “control everything” approach to building cars at the River Rouge Plant where raw materials were brought into one end and finished cars rolled out the other end, colleges have maintained tight control over virtually every aspect of the academic food chain.

Professors are carefully recruited, classroom times and schedules are thoroughly planned, courses are tightly prepared, degrees are strategically framed around in-house talent, and academic accomplishments are meticulously positioned to help brand the experience.

For this type of system, the days are numbered.

Rest assured, the coming wars on colleges are not being waged by societal misfits or some rogue band of college haters. Instead, they will come from some of our most admired companies.

Profile of an Attacker

Many colleges teach courses on the free enterprise system and scrutinize the great battles in corporate America, but few have ever been involved in one.

Once a college course is converted into online education it becomes a commodity. And, as a commodity, it can be reengineered with better graphics, better audio, improved styling, delivered through hand-held devices, and marketed more effectively to different demographic groups.

Colleges are like slow moving whales about to get attacked by saltwater piranhas. While department heads in colleges are off studying the mating rituals of Komodo Dragons in Indonesia, corporate managers are working day and night, ruthlessly focused on opening new markets and uncovering new revenue streams. The pace and intensity of the work is radically different.

The attacks will first take on the appearance of partnerships for handling the IT infrastructure, and the distribution and marketing of courses, but will quickly deteriorate into the tail wagging the dog.

Those attacking colleges, albeit indirectly, will be companies like Apple, Amazon, Google, Microsoft, Yahoo, and IBM. Many colleges already have working relationships with these companies.

Colleges have long enjoyed the government-sanctioned protections of accreditation and degree-granting ability. This too is about to come under attack. Companies are playing for major stakes, and very little is off-limits in corporate America.

What’s at stake is the possible development of a singular website capable of creating and distributing the vast majority of all courses in the world. It has the potential for becoming the largest and most influential website in the entire online universe.

In business terms, the online education arena has the potential to connect every living person on the face of the earth and become the largest and most profitable company in the world. That’s what’s at stake.

For colleges that get the lifeblood sucked out of them, victims of collateral damage, it’s not that the corporate world has set out to destroy them. Rather, as the intensity for gaining new market share heats up, the gloves come off, and the ensuing wake that follows will leave behind a tidal wave of destruction.