On the Shoulders of Giants: Retro art and imagining future transportation

As a futurist, I’ve become enamored with past visionaries and their gift for imagining the future. While some of their retro-futuristic visions may seem poorly conceived or even laughable, each of them had a gift for opening the door of possibilities into the magical world ahead.

One thing I hope we all share, though, is an imagination and a curiosity about the future. Instead of limiting our focus on the present, I trust there’s a little futurist in all of us as we try to visualize the technology advances that future generations will find commonplace.

I really enjoy seeing those online posts where, for example, Millennials try to explain to Gen Z’ers how different life was “when I was your age.” That’s especially true with technology. The 1980s and 1990s versions of video games, computers, recording devices, music media, and so on, seem ancient today – similar to how young people would view a Victrola!

A friend at Budget Direct shared some insights, as a fun way of looking back on what our parents and grandparents considered “futuristic” modes of transportation.

As part of the project, they commissioned drawings of what these vehicles would look like today. (If you’re like me, you were drawing these kinds of cars in the back of your spiral notebook during middle school Algebra class instead of solving for “x”!)

No doubt these 20th Century futurists with a passion for transportation technology and design hoped their dream vehicles would be on the market within their generation. That hasn’t been the case, but if you look at the original and re-created images, I think you’ll see some things that are very familiar.

Let’s have some fun taking a futuristic look at the past! 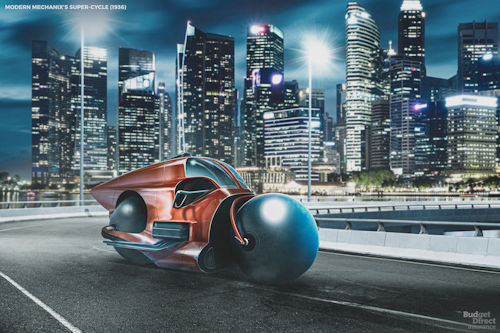 This proposed “Super-Cycle,” sketched in the 1930s, would reach speeds of 300 m.p.h. according to its now unknown designer. As of today, one motorcycle model reportedly has broken the 300 m.p.h. barrier, but it looks far more like a traditional motorcycle than the Super-Cycle.

If you check out that original design in the link, the Super-Cycle doesn’t look much safer than today’s high-performance bikes, even with its vaunted “headrest over the windshield” feature. The fact that the test driver in the drawing appears to be protected only by a 1930s-era leather football helmet probably adds to that perception. Let’s hope that inside this re-imagined Super-Cycle, there’s a bit more protection!

Gil Spear was a well-regarded car designer for Chrysler, but his design (below) for a 1941 model never came to fruition. 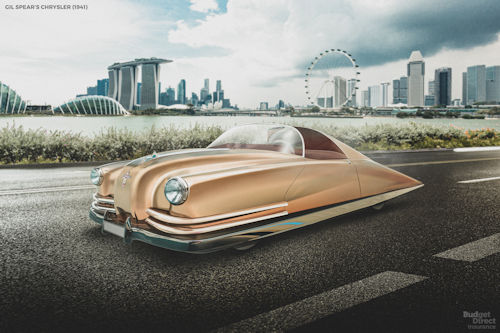 Gil clearly spent most of his time thinking about the front ends of his cars – grill design was his forte. The back end in this sketch almost seems like an afterthought. This two-seat coup certainly conjured up visions of a spaceship on wheels, an image that’s maybe subliminally re-enforced when his car is placed in an airport setting.

This 1961 concept car was designed by Syd Mead for the McLouth Steel Corporation in Detroit, which was dabbling in auto production at the time. You may have heard of Syd in conjunction with his work designing the cycles in TRON movies. 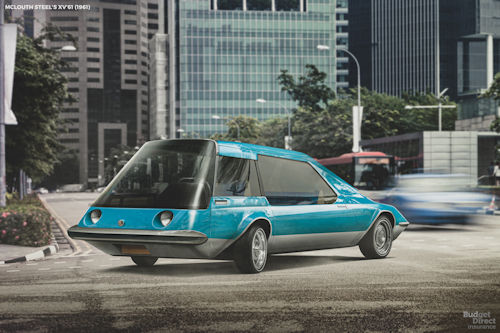 I like this design because it seems that the car would look just as good (and maybe less bus-like), driving in reverse, bringing to fruition my idea from long ago of having dual direction cars with swivel seats.

Plus, it has kind of a Jetsons’ look to it don’t you think?

The Singoletta (Singlet) was ideated by Sci-Fi author Franco Bandini in the early 1960s. An electric motor, easy parking – the Singoletta seems like a very plausible solution for today’s urban gridlock. This is the 1962 conceptual rendering of the Singoletta from the noted Italian Domenica del Corriere weekly newspaper, now out of print. 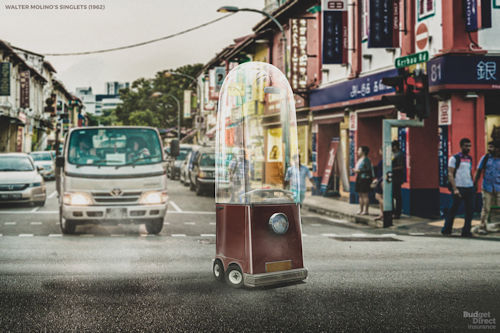 As the Journal of Classic Cars article points out, the Singoletta is essentially a canopy over a Segway!

There’s not much protection for the driver that I can tell (lots of glass to boot), but if everyone stays at or below the 40 km/hr estimated top speed (and if it’s used in this kind of congestion), how much harm could there be?

The New Urban Car, designed by Ken Purdy in the 1970s and drawn by Syd Mead, looks really, really familiar. 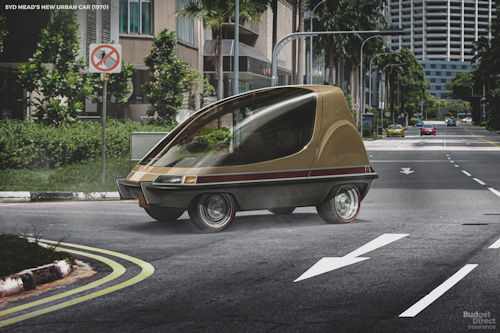 It’s DeLorean-esque in that the door (a single one) opens up. It’s hinged at the front bumper, a really futuristic look, but not too practical for rainy days.

Last of course, we need to address the hover car issue that’s been a staple of imagination and sci-fi for some time. Some people are eager to jump right from four-wheels on the ground to widespread personal flight vehicles. But for intra-city driving, with no 3-dimensional road systems, I think we need to take it a step at a time and set our sights on hovering for the time being! 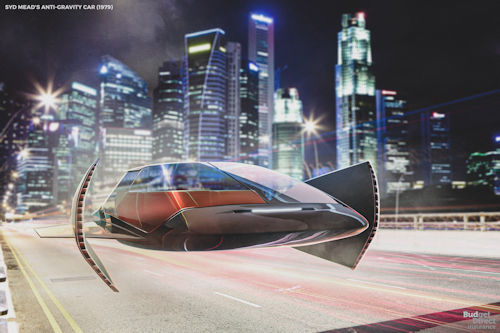 Again, working on behalf of the steel industry, Syd Mead put pen to paper to come up with a futuristic Anti-Gravity Car similar to the one here that’s based on his earlier designs.

How close are we to having hover cars on and over the road? Well, we have hoverboards and hover boats. The technology is there. Ford introduced its Levacar prototype in 1959. At this time, Volkswagen and Tesla seem to be in the driver’s seat in developing and marketing hover cars. None of the prototypes I’ve seen, though, come with the very distinctive TIE-Fighter-style side wings in Syd’s visionary plans!

As a final thought, keep in mind, all of the images of the future we’re creating today will look just as dated fifty years from now.

[Acknowledgment: Information for this blog came from the excellent article “Visions of an automotive future that hasn’t come to fruition,” which includes images commissioned by insurance company Budget Direct. All photos in this blog are reproduced from that article, which appeared in the Journal of Classic Cars on August 7, 2020.]