2050 and the Future of Transportation

Transportation technology is progressing at a much slower pace than some of the other sciences such as information technology, biotech, and nanotechnology. As an example, the world’s human speed record was set in 1969, a full 37 years ago, when Thomas Stafford, John Young, and Gene Cernan flew in Apollo 10 at 24,790 mph. While there is much talk about flying at a speed that approaches the speed of light, very little effort is actually being expended in this area.

However, transportation technology is about to move ahead more rapidly in the coming years with the advent of two radically new technologies – frictionless vehicles and binary power.

Throughout history we have learned that the two principle driving forces of humanity are freedom and control. While current automotive technology gives us the freedom to drive as fast or slow as our vehicle will take us, and control over our timing and direction, we are still restricted to driving on the ground and we have a hornet’s nest of laws to contend with regarding speed, flow, and operation.

In the near future, automotive companies will focus on fully automated vehicles where people can “punch in” or “speak” the place they want to go to and the vehicle will automatically take them there. This “control feature” will open up huge additional markets for automotive companies to sell to the elderly, families with kids too young to drive, and the visually, physically, and mentally impaired. The arrival of fully automated navigation systems for ground-based vehicles will set the stage for fully automated navigation systems for flying vehicles.

Here are a few other transportation landmarks that will help pave the way for the more significant innovations.

Around 2030 we will see commercialization of the first friction-free no-moving-parts flying vehicles which will be considered by many to be the ultimate freedom machine. Much like the transition from analog to digital in the world of information technology, the study of traditional mechanics and traditional aerodynamics will be replaced with a new physics governing vehicular movement.

Even today, flying cars are very much on the radar screen to become a next generation automotive technology. They will begin with a more convenient version of today’s airplanes and eventually converting over to the frictionless cars.

The flying car era will really begin around 2015 with flying drones. Flying drones will be used by FedEx and UPS to deliver packages, Pizza Hut to deliver pizzas, and Kroger and Safeway to deliver groceries. But beyond that, drones will enable homes to be taken off the grid with delivery of water and electricity (changing out batteries for the home), trash and sewage pickup, and much more. These too will begin as air-powered vehicles and later convert to frictionless drones. 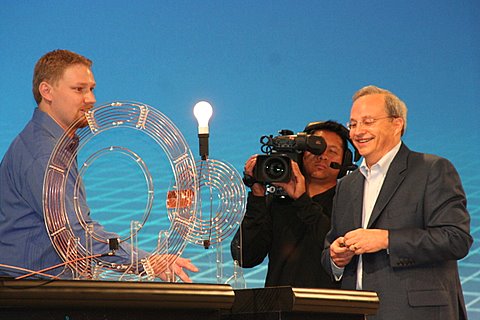 The friction-free no-moving-parts vehicles will run on what we call “binary power”. Binary power is the concept where two otherwise harmless beams of energy will intersect at some point in space creating a source of power.

To better explain binary power, think in terms of two invisible beams intersecting in a room and the point at which they intersect is a glowing point of light. Yes, binary power will eventually replace all light bulbs. And lest you think it can only be used for intense forms of power, it will also be used to create “points” of sound, eliminating the need for speakers and headphones.

2050 and the Transportation Industry

With power being beamed in, the cost, weight, and manufacturing complexity of these vehicles will be greatly reduced. For this reason the industry will go through a very rapid conversion leaving the mechanical masterpieces we know as cars today destined for the scrap heap.

Once the flying car industry takes off there will be a gradual decaying of the existing highway system. Eventually highways will go away, starting around 2070.
2050 and the Emerging Space Industry

Frictionless engines will form the basis of new propulsion systems for space travel.

2050 and the Power Industry

The power that drives vehicles will transition from oil to electric and later to binary power. Electric vehicles will start to make major market inroads around 2015 because of improved battery technologies and because of the fact that the electric infrastructure is already in place for rapid “refueling”. Hydrogen will make some inroads but will not become anything more than a niche industry.

2050 and the Shifting of Politics and Culture

While individuals will be striving to gain control, our countries and governments will begin to see their control slipping away. The Internet has created borderless economies that have confused the issue of power and control and even the sovereignty of nations. With the Internet’s ability to conduct business and perform flawless transactions across borders, countries have essentially lost control of commerce. Flying cars will take this one step further and countries will begin to lose control of their citizens as national borders become meaningless.

While it is possible to visualize “electronic borders” formed around the perimeter of a country, cloaking devices and other types of system hacks will quickly render that kind of system useless.

The future of transportation will be derived by strong desires for personal freedom and people’s need to gain control over lifestyles that are moving faster and faster.

At the DaVinci Institute, our goal in writing “2050 and the Future of Transportation” was to help stimulate thinking and hopefully make it controversial enough to cause these topics to be debated. While we did manage to turn our crystal ball on high beam for this exercise, there are many optional paths that we could potentially go down to cause a different outcome.

Please take some time to challenge our assumptions, and let us know what you think.