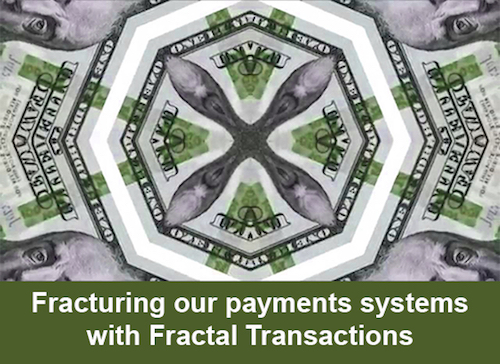 Launching a New Era in the Future of Money

Imagine yourself sometime in the future sitting in front of a television, watching your favorite show, and a pizza commercial comes on. This is one of those commercials that hits you at exactly the right time and you instantly start craving pizza. For the next few seconds you stare at the screen and your mind thinks of nothing other than pizza. Finally you give in and utter the single word “yes”.

Thirty seconds later a flying pizza drone docks at your house with a piping hot pizza with exactly the right toppings. In addition to the pizza the drone also comes with a six pack of beer, and not just any beer, but you’re favorite import beer from Australia. When you gave the command by saying “yes” it automatically knew what you wanted.

Some people believe this to be the ultimate transaction with instant gratification, instant money exchange, and a satisfied customer. Personally I’m glad we don’t have anything like this yet because I’d weigh over 800 pounds. Adding a little friction between my brain and my stomach is a good thing.

But the transaction world is changing and some emerging new technologies are attempting to turbo charge impulse purchases by making it very, very, very easy to say “yes”.

Nothing kills a purchase quicker than making people wait. Take a crowded store and bottleneck the checkout process with too few checkout lanes and you can see the potential customers walking away. Some will even leave full shopping carts in the aisles. People hate to wait.

Today many retail outlets have converted over to self checkout lanes because even if people have to wait, it won’t be long and customers have more control over the process. Major retailers in Europe have stepped up their installation of the self-checkout systems after finding out that sales increased an average of 10 percent.

A recent survey in Munich, Germany, in April 2006 by Visual Merchandising Initiative, showed that 73% of customers strongly preferred self-checkouts to attended checkouts. Also, 70% said self-scanning enhanced their shopping experience, and 64% welcomed a reduction in waiting in store lines.

When it comes to wireless handheld devices, the Japanese are moving faster than almost everyone else in the world. Given Japan’s cash-focused consumer economy and the high percentage of people using cell phones, a wallet phone becomes an obvious next step.

According to a recent eMarketer study, over 95% of Japanese consumers already have a mobile phone. This compares to 75% of consumers in the U.S. and 61% in Canada. Japan is a culture that promotes the early adoption of new technology, and 16% of Japanese mobile phone customers already use some kind of m-commerce.

The idea that mobile wallets could replace traditional wallets is not science fiction to Japanese consumers. Over a third of those surveyed by NTT DoCoMo said that mobile wallets would not just replace wallets, but coins as well, and 26% even think that currency will disappear completely over time.

Even though mobile wallets are a relatively new phenomenon, NTT DoCoMo found that 57.5% of Japanese consumers are interested in using them.

Payments made by mobile wallets can provide instant feedback as well as the location of the consumer. For marketing people this creates value far beyond the dollar amount of the transaction. Experts on the Internet have often theorized how the targeting and feedback potential of the online marketplace will dramatically change things. Mobile advertisers who aim promotions at mobile wallet users will take this potential even further.

The Payee Side of a Transaction

Throughout history businesses have lived or died on the timing and flow of revenue. As a result, traditional deal brokers place a huge emphasis on controlling the flow of money. All non-cash money transactions in the past involved a time float to allow time for the money to clear their respective accounts, and even cash transactions involved delays in getting posted to a bank account. Delays were often the proverbial straw that broke the camel’s back.

The initial recipient of money was always in the driver’s seat controlling the speed, timing, amount, and if and when money would ever get paid to the secondary and tertiary recipients down the financial food chain. 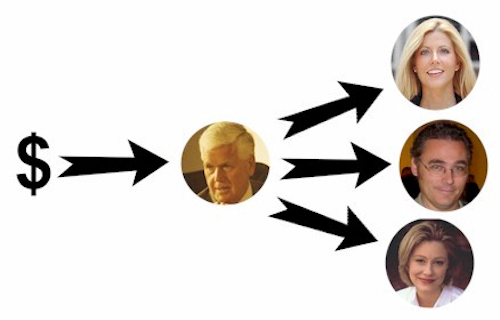 To begin with, fractal transactions remove the bottlenecks. When a purchase is made, money flows into a transaction and is distributed instantly – no waiting for someone to write the check, authorize payments, or waiting for money to clear. This removal of the bottlenecks has the potential of dramatically improving the flow of money and at the same time opens up many new strategies for doing business.

In its simplest form a fractal transaction will involve a product or service. Let’s take for example a manufacturer who creates a widget. When an end customer sees the widget on a retail store shelf and purchases it, money flows into the transaction and is instantly split between the retail store and the manufacturer.

The amount paid to the manufacturer can either be a fixed amount or a percentage, or it can be a percentage with a fixed amount minimum. The amount paid to the retail store can either be a single lump payment or a piece of it can be pealed off in the form of a commission for a sales clerk. In this example the options are still relatively simple, but there are a variety of complex decision points that can be engineered into the transaction.

Amazon Example: In this example a customer buys a book from Amazon.com. Money paid for the book is instantly divided four ways in a split between the author, the publisher, Amazon, and the shipping company. Additional recipients may be a co-author, a referring website that gets a commission, or a warehouse worker filling the order. 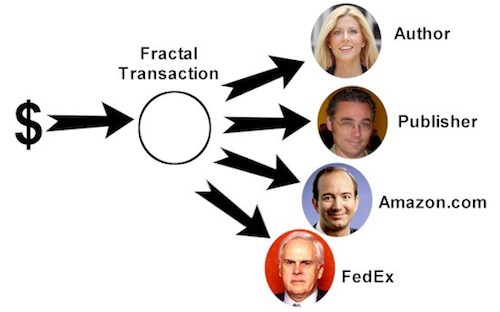 Fractal transaction example of purchasing a book from Amazon

The amount of money going to each recipient is determined by how the fractal transaction is set up, and in the middle of the transaction will be a bank or financial institution serving as a checks and balance entity for the system. They will be compensated with a small percentage of the money.

eCommerce Example: A typical ecommerce transaction will involve multiple splits. In the following example money is split between the manufacturer, distribution center, call center, shipping company, and the point of sale, which in this case is a website operator. 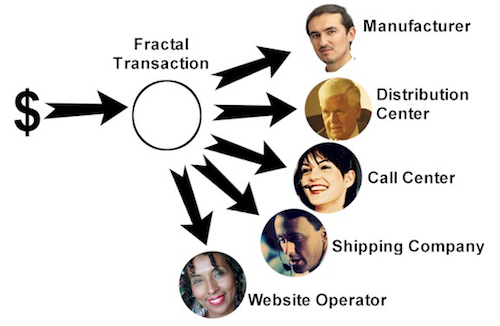 A product with a complete distribution plan built into it is an easy product for most online storefronts to handle. Their primary decision points will then be whether or not it fits into their current product mix and if they can make any money off of it. If done correctly, they will only need to add their commission to the fractal and post the product on their website. The fact that it is a fractal transaction means that they will get instant money from a purchase. People in the online world will be much more likely to carry a product if the money is instantaneous.

Ideas surrounding real-time distributed financial transactions like this are mere seedlings waiting to sprout. So building a core architecture for fractal transactions that is both open and flexible, yet at the same time secure and accountable, will be the key to its success.

I’m aware of several patents that have been filed in this area but working models and functional business systems are still in the experimental stage. But these are some of the critical factors that should be considered.

When a person who is producing a new product decides to sell the product online, one of their first tasks will be to set up the fractal transaction. This setup will involve establishing payment strategies and at the same time building a distribution plan with warehouses and call centers and shipping companies built into the mix. This information all becomes part of the fractal.

Once the fractal is set up, the product will be offered to people in the online world who will decide if they want to distribute it. Properly executed, a fractal transaction architecture will make it extremely easy for websites to market a product. With good margins, an interesting product could organically be posted on hundreds of thousands of websites overnight.

The Future of Fractal Transactions

This is, in effect, three-dimensional thinking in a traditional financial world founded on a very linear, two-dimensional mindset. But the introduction and growth will happen quickly.

Fractal transactions are the key to unlocking an efficiency the world has not yet known. The tempo of business will ratchet up a few notches, new business models will begin to materialize, and the old ways of doing business will begin losing participants as the flow of money short circuits and passes them by.

One problematic issue will be the accounting and bookkeeping side of the business because few people are acquainted with the automated spreadsheets and structures necessary to track and monitors these types of transactions. But that too will get created.

In the end, the people who control the transaction world will be in the driver’s seat to control much of the future business world as it unfolds. Competition will be fierce.