City of the Future – Part 2 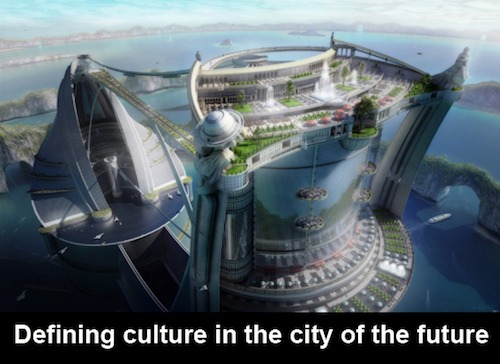 As we start to understand the way people connect with their local communities in the future, we begin to see a growing need for central gathering places to help drive person-to-person activities.

Ironically, at a time when cities are very strapped for cash and there is a growing push to decrease the number of city-run facilities, our ongoing city-to-city competition for attracting talent will cause exactly the opposite to happen.

Rather than counting on existing businesses and organizations to organize and manage activities as an adjunct to their core mission, like shopping centers hiring entertainment to drive traffic on weekends, cities will begin to take a more hands-on role in forming the local culture.

As I mentioned in part one, future cities will be designed around fresh new ways for people to meet people, and they will be judged by their “vibrancy, their interconnectedness, and their fluid structures for causing positive human collisions.”

In this journey into the city of the future, we will explore ways in which community culture and entertainment will begin to change through the introduction of three novel concepts – tournament centers, participatory parks, and live music plans.

Most cities host a number of tournaments each year ranging from athletic competitions like softball and basketball tournaments to more intellectual endeavors such as chess club tournaments, spelling bees, or debate forums.

The complete range of contests that take place within a city each year can be truly impressive, and the overall economic impact of these ventures has not been overlooked. From an economic standpoint, some cultural events can make or break a city budget.

But more than the underlying economics of tournaments are the fluid social environments that are evolving around us. With populations becoming more transient, people want to be able to “plug in” where ever they happen to be and this need will begin to focus today’s contest and tournament activities around specially designed facilities.

In much the same way large conventions and group meetings have been formalized with the construction of convention centers, and recreational activities coalescing around rec center, a new breed of facilities designed around contests and competitions will emerge – tournament centers.

Tournament Centers will be developed using various configurations to draw attention to the city and its cultural identity. A city along a river may include facilities for managing fishing competitions, while a city in the mountains may want to focus on mountain climbing competitions.

However, most of the physical structure will be designed around easily configurable open spaces, and a resident team of tournament designers who will earn their stripes by organizing a complete year around assortment of competitions.

Tournaments will range from volleyball to badminton, from bridge to poker, from hot air balloons to marathons, and from scrabble to robotics. The variety of options will only be limited by a city’s own imagination.

Since each contest will have its own group of loyalists, fan clubs, and organizational dynamics, each event will involve a communication structure that ties directly into the group’s core user community.

From an entertainment standpoint, it will be easy to find out about all of the upcoming tournaments taking place. For visitors, it will be an easy entry point to become familiar with a local culture.

Great cities in history were known for their grand parks with their flowing masterpieces of floral design. But today’s parks are often little more than freshly cut grass and trimmed trees, with a playground thrown into one corner for the kids.

For most cities, parks have deteriorated into rubber stamped open space, boiled down to the bare essentials of grass, trees, sidewalks, playgrounds, and benches – nothing memorable, with little to inspire the mind.

With a growing resentment towards sameness, and a move towards personalization and hyper-individuality, perhaps a better approach is the idea of participatory parks where the community decides on a particular theme and becomes integrally involved in creating the parks own distinctive features.

Participatory parks will range from active to passive on the community involvement scale, but with each new development, the host city will set into motion a long range plan for people to rally around.

Here are some brief examples of how this concept will work. I’ll let your imagination fill in the gaps.

Other kinds of participatory parks can include unusually designs for game boards by involving the people playing them, stages for people interested in performing arts, history walks with symbols of the past contributed by local citizens and built-in places for time capsules, artistic gardens that bloom in concert with the people who get involved, evolvable playgrounds that grow along with the thinking of “play,” and so much more

Parks have traditionally been designed in a top-down fashion with only the limited few having a say in the design of the content. Participatory parks give people a feeling of ownership and endearment as they contribute their piece to the much larger “master” piece.

Some of my most memorable moments in life have involved live music. Sitting on the open air patio at Pepe’s in Vail listening to Rod Powell, singing along with a crazy group at a piano bar on the waterfront in Baltimore, or hearing an “experimental noise” performance at an underground club in Madison, Wisconsin, live music has made a permanent impression on me.

But more than just creating impressions, live music has a way of sliding a creative backdrop behind the intellectual horizons of our minds. Brilliant thoughts are more easily triggered in creative environments, and live music provides a great triggering mechanism.

While the business world often gets immersed in ideation and brainstorming sessions, they often lose sight of the truly jaw-dropping ideas that spring to life at random moments during the rest of our days. Context is a key element in those moments of inspiration.

Live music creates “divine context,” a term I use to describe optimal conditions for brilliant thinking. It enables the talent of the performer to merge with the talent of the listener in a way no recorded music ever can. But those moments of divine context are hard to come by in our current behind-closed-doors system we use to manage music.

When live music is only reserved for those willing to leave their homes, travel great distances, and pay admission fees, we develop a distorted view of the importance music has in our lives.

In reality, virtually everyone is interested in listening to live music. But not if it’s hard to get to.

So the key question we should be asking is, “how do we bring the music to the people, instead of making the people go to the music?”

Musicians exist in the creative right-brained world and tend to be out of their element when forced to function in a left-brain dominated society.

Consequently, most musicians have great difficulty carving out a sustainable career in the music field.

When thinking through human traffic pattern during a normal day, it becomes a relatively easy exercise to start naming the places where large numbers of people hang out – shopping centers, live sporting events, airports, schools, parks, and even hospital waiting rooms.

The question then becomes, “If live music were inserted into the mix, where would it be appropriate, and who would pay for it?”

Realistically, not all of these questions can be answered with “yes.” However, most cities have not bothered asking.

Musicians are an integral part of building a creative culture, and by encouraging musical artists cities will also find ways to encourage sculptors, painters, live performance art, and much more.

Creative cities have a way of inventing their own image and inventing their own economies. Problem-solving becomes far easier, and the troubles of the world suddenly seem far less significant when people are allowed to vent their frustrations through creative outlets.

And that is where the true opportunity lies.

NOTE: In the coming weeks I will be covering several other aspects of “The City of the Future”

← Reinventing Humanity by Reinventing Time Business Colonies: A study of structure, organization, and the evolution of work →