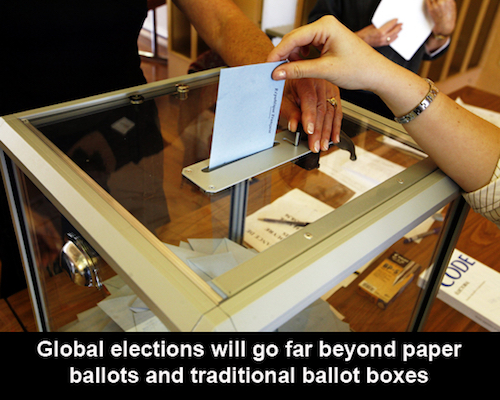 Over the past month I have hosted a series of meetings to discuss the topic of global elections. The purpose of these discussions was to help expand our understanding of the topic. I also truly believe that someone will begin to produce global elections, in a meaningful way, sometime very soon.

To begin with, I’m not a fan of any form of one-world government, nor do I think it’s even a remote possibility. Instead, there are many other issues that can be decided through some form of global referendum, so we started with this series of questions.

When will we see the first global election with over 500 million people voting from over 50 different countries? Will they be voting for a person, or voting on an issue? If it’s a person, what position will that person be running for? And, if it’s an issue, what issue will be so compelling that everyone wants to vote on it?

Perhaps more importantly, what organization will have the capability to mastermind such an election, and what will they get out of it?

The idea of global elections is not new. In fact, people have dabbled with the concept for centuries. However, the Internet has opened up an entirely new toolbox of possibilities.

Indeed, some organizations are already hitting the numbers I had originally posed as a benchmark for global elections. Here are three significant examples:

Started in 1956, the Eurovision Song Competition is the longest running example of a global election process, with 51 different countries having participated at least once over the past 54 years.

The contest is also one of the longest-running television programs in the world, with audience viewership as high as 600 million internationally.

The rules for this competition have become quite elaborate with each person allowed to vote multiple with a point system that ranges in value from 1 to 12. One interesting caveat is that voters cannot vote for songs from their own country.

American Idol is a reality television competition to find new solo singing talent. Debuting on June 11, 2002, as American Idol: The Search for a Superstar on the Fox network, the show has since become one of the most popular in the history of American television. It is currently the most-watched TV series in the Nielsen ratings.

From the semifinal onwards, the fate of the contestants is decided by public vote. During the contestant’s performance as well as the recap at the end, a toll-free telephone number for each contestant is displayed on the screen. For a two-hour period after the episode ends (up to four hours for the finale) in each US time zone, viewers may dial or text their preferred contestant’s telephone number, and each call or text is registered as a vote for that contestant. Viewers are allowed to vote as many times as they can within the voting window, however, the show discards the votes coming from power dialers.

Over 110 million votes were cast in the first season, and by Season 8 the total has increased to 624 million. Voting via text messaging was made available in the second season when AT&T joined as a sponsor of the show, and 7.5 million text messages were sent to American Idol that season. Over time, the number of texts has rapidly increased, reaching a peak of 178 million texts in Season 8. The votes are counted and verified by Telescope Inc.

3.) New Seven Wonders of the World

New Seven Wonders of the World was a project that attempted to update the Seven Wonders of the Ancient World concept with a modern list of wonders. A popularity poll was led by Canadian-Swiss Bernard Weber and organized by the Swiss-based, government-controlled New7Wonders Foundation, with winners announced on July 7, 2007 in Lisbon.

The New7Wonders Foundation claimed that more than 100 million votes were cast through the Internet or by telephone. Nothing prevented multiple votes, so the poll was considered “decidedly unscientific”.

According to John Zogby, CEO of the New York-based polling organization Zogby International, New7Wonders Foundation drove “the largest poll on record” even though the numbers in the Eurovision Song Competition and American Idol were higher.

The program drew a wide range of official reaction. Some countries touted their finalist and tried to get more votes cast for it, while others downplayed or criticized the contest. After supporting the New7Wonders Foundation at the beginning of the campaign, by providing advice on nominee selection, the UN’s Educational, Scientific, and Cultural Organization (UNESCO) distanced itself from the undertaking in 2007.

In 2007 the foundation plans to launch a similar contest, called New7Wonders of Nature, in mid-2011.

The trickiest part to hosting global elections will be the voting process and making sure the technology is hacker-proof. Several companies have tried, but devious people are willing to go to great lengths to find holes in the systems. Each of the three previous examples dealt with this issue differently.

In addition to technological problems are issues of authority, accountability, and enforceability. As an example, if world-wide referendums were used to decide on an official global currency or official global language, who will enforce the results? What penalty will there be for non-compliance?

Credibility will be a deciding factor when it comes to attracting voters. Is the election being hosted by a credible organization, and will the results really matter. As an example, a referendum on an official earth language will have far less credibility if it is sponsored by the BBC or China Daily than if it is officially sanctioned by the United Nations.

Perhaps the biggest missing piece will be the rules that apply to the voting process. Who gets to vote? Will it be a majority-wins process with multiple rounds of voting, or will the greatest number that prevails? How much time will people have to cast their vote? Who will verify the results? What checks-and-balances will be in place to assure the process hasn’t been manipulated or tampered with? Will there be a cost for voting, such as $1 per vote? And will the results be tabulated using the English or Metric system? (Sorry, but I just have to poke fun of this long-standing dispute over measurement standards.)

None of the “missing pieces” I’ve listed above are insurmountable. Someone will figure them out. It’s just a matter of time before we start seeing lots of activity in this space.

One central purpose of a global election will be to serve as a marketing tool, to expand awareness of certain events and to give the public the feeling of ownership when it comes to a specific selection process. As an example, each of the following could be handled with an initial slate to choose from, with people around the world making the final selection.

Over the coming years we will see a number of variations to the global election theme and you will be asked to weigh-in on a variety of major global topics.

Again, many of the proposed elections will come across as a nuisance, background noise with very little credibility. But all will be contributing to a larger movement involving global democratic processes.

Organizations Most Likely to Host the World’s First Global Election

When thinking through the list of organizations that may benefit from hosting a global election, it’s important to understand which ones wouldn’t.

Existing countries have an obvious election bias, and the United Nations, beyond the internal complexities of getting an issue like this passed, would have too many members who feel threatened by the results.

Here is an initial list of organizations that come to mind:

Global elections pose a substantial threat to our current balance of powers. While some people will dismiss them as unrealistic, others will view them as an undermining force. They may be both.

One approach will be to attach global elections to non-threatening referendums about significant, but non-lethal issues such as the Eurovision Song Competition, American Idol, and New7Wonders Foundation. Beauty contest elections like this may include favorite movies, books, actors, actresses, songs, or cause-of-the-year. They pose no real threat to any existing power structures.

Once the number of participants involved reaches a critical mass, a second phase of elections can be structured to deal with more pithy issues.

Global elections are about to enter a whole new era. They open the doors to fame, fortune, power, and influence in ways that no other process ever has.

A sporting event that wraps itself in a global election process can quickly rise in stature to rival the Olympics or the World Cup. A television network with a significant push into the online world has the potential to greatly extend their influence into global markets. Social networks that add meaning and privilege to their existing platforms can make huge inroads into areas where they were ignored in the past.

But I’m only scratching the surface.

Global elections are coming, and they will happen in a big way. Hold onto your hats, it’s going to be a bumpy ride.

← Introducing the Slashcasters The Future of the Cruise Industry →