Why Do We Fear the Future? 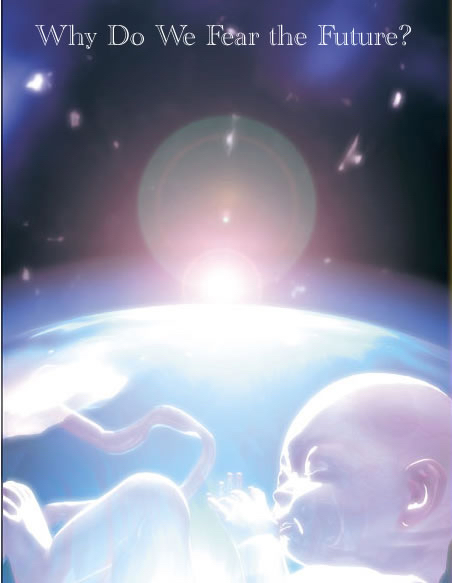 From Futurama to Prey, our view of the world ahead has become tainted with dismal prospects for a positive future

Few of the science fiction buffs watching reruns of Matt Groening’s now-defunct cartoon classic Futurama have any idea the name of the show was coined half a century earlier for a wildly-popular ride at the 1939 World’s Fair in New York.
That Futurama – the original Futurama which is viewable on YouTube – was an unforgettable trip into the brave new world of 1960. Yes, the fabulous 1960s. Who can forget the thrill of exiting off a highway at 50 miles per hourIt’s easy for us to laugh at the primitive descriptions of things now commonplace. But back in 1939, hundreds of thousands of people were mesmerized by Futurama’s elaborate vision. What drew them in? Gleaming skyscrapers, massive superhighways and promises of greater mobility. Spectators were exhilarated by this imaginary presentation staged by General Motors.

Gliding along in comfortable easy chairs wired for sound, they looked down on the spectacular 35,000 square-foot diorama and learned how giant highway intersections would permit those rapid right and left turns.

The calming tones of the narrator were filled with assurance. Doubt was not option in Futurama. “The World of Tomorrow” promised better days ahead and Futurama followed this script to perfection. Visitors were promised “abundant sunshine, fresh air, and green parkways” blended together seamlessly with dazzling skyscrapers and seven-lane highways. Thanks to the monumental scale of the presentation, even the most-outlandish claims seemed believable.

At the end of the ride, when the awestruck visitors were dropped of in a GM showroom and left to contemplate the meaning of it all, they were handed a souvenir button that read: “I have seen the future.” Few disagreed.

Of course, the real 1960 looked almost nothing like the car-based utopia of Futurama. But it was the “then and now” that mattered-twenty years later, the ride was sealed in the public’s imagination as one of the greatest futuristic visions ever put together. “A modern masterpiece of illusion” writes Joseph P. Corn who authored Yesterday’s Tomorrows: Past Vision of the American Future, adding “no futuristic film or exhibit has ever been so convincing.” [1]

Because of this, GM quickly gained the public’s confidence. Even though they weren’t 100% accurate, in the minds of those attending, they, more than anyone else, understood the future.

So where are today’s grand visions of the future? And why are we so reluctant to buy into the promise of better times ahead?

In a polar opposite view of Futurama’s “wonderful times ahead” approach, Michael Crichton’s book Prey looks at the future of nanotechnology through grim-colored glasses, speculating on the extreme dangers of technology gone awry.

Prey begins with a sobering introduction by Crichton voicing his concerns about the dangers of unrestrained technology, specifically the nascent field of nanotechnology. Sounding an alarm, “the quest to build man-made machinery of extremely small size, on the order of… a hundred billionths of a meter … this is a cautionary novel.”

The story centers around Jack Forman, a brilliant programmer who specializes in programming computers to solve problems by mimicking the behavior of insects and wild animals, such as swarming bees, flocks of birds, or hunting packs of hyena. His talents come into play when he is asked to bail out his wife’s company, a top-secret research lab – Xymos Technology – that has created a form of self-replicating nanotechnology – a literal swarm of microscopic machines. Originally meant to serve as a military eye in the sky, the swarm escapes into the environment and is seemingly intent on killing the team of scientists trapped in the facility.

Crichton is a brilliant author who is very skilled at crafting a believable story rich in technical details and scientific tidbits to give all the trappings of not only a possible, but a seemingly likely scenario for the future.

People who watch Futurama and later read Prey cannot help but be struck by their radically different perspectives on the future. Futurama is filled with hope and inspiration and Prey is filled with fear and pessimism.

So what has changed? Why have we gone from a time where we couldn’t wait for the future to happen until now, a time where many live in constant fear of what may lie ahead?

Storytellers and the ‘Fear’ Market

To begin with, we have created huge markets for storytellers, and every good story needs a villain. Villains come in many varieties, but one of our most insidious fears is the “fear of the unknown”, and a good writer can quickly build layers of conjecture around the known pieces of truth and craft settings, characters, and storylines around virtually any topic. So it is easy to turn emerging technology into a villain.

But more importantly – there is a huge market for fear. A large percentage of news stories today have a fear component. News anchors spend an inordinate amount of their newscast telling us what we should be afraid of and who we should fear. Authors, writers, and radio talk show hosts have a way of dancing on the edge of fear with every topic covered, and they do it because of the ‘fear’ market.

Politics and the ‘Fear’ Message

Politicians are constantly searching for a political message that will illicit an emotional response. While it can be effective to talk about how we have conquered problems of the past and build ideas around hope for the future, it is far more effective to paint a political opponent as someone to fear.

Whether it is the fear of terrorist attacks, rising oil prices, stock market crashes, or global warming, the political message is always well-crafted, well-timed, and measured carefully to control the thoughts of the listening audience.

But along with political attempts to instill fear of an individual is the collateral damage of causing us to fear the sciences and technologies that will someday be the solution to many of society’s big problems.

In a strange bit of irony, Michael Crichton, in his book titled The State of Fear, has become a vocal opponent of the political fear mongering associated with the global warming debate.

“In my view, there is only one hope for humankind to emerge from what Carl Sagan called “the demon-haunted world” of our past. That hope is science.

But as Alston Chase put it, “when the search for truth is confused with political advocacy, the pursuit of knowledge is reduced to the quest for power.”

That is the danger we now face. And this is why the intermixing of science and politics is a bad combination, with a bad history. We must remember the history, and be certain that what we present to the world as knowledge is disinterested and honest.” [2]

Hollywood, the Mother of All Fear Factories

At the same time that the news media has been hawking its frightening look at the world around us, and political parties take polarizing stances on technologies that clearly have no defined right or wrong component to them, all of this is amateur hour compared to the impact that Hollywood can have with a single movie.

There is a reason why science fiction is lumped in with the horror section in video stores.

The money that a Hollywood movie earns is directly related to the scariness of the villain. Sometimes the villains are people like Darth Vader in Star Wars or Lex Luther in Superman, but very often the villains are technologies like genetic engineering in Jurassic Park, robotics in I, Robot, or nuclear power in the China Syndrome. And with the bad-guy connotation comes a perceptive fear around these emerging new industries, placing additional hurdles that businesses have to overcome.

We should remember that technology itself is neither good nor bad. While natural disasters are far more destructive and far more unpredictable than any man-made creation, it is important for us to maintain a balanced perspective on the positive and negative side to technology.

However, the most difficult to scrutinize are the motives and purpose behind the anti-tech crowd. Yes, some truly believe we would be better off if everyone lived a pedestrian lifestyle. And others are gripped with fear about polluting radio waves and upsetting the balance of nature. But often there are other forces at play in the background encouraging the ludittes who yearn for a more Amish-like time.

Objectivity becomes a difficult task when the information piles begin to mount on both sides of an argument. Typically the technologies with clear-cut right or wrong attributes get very little attention. Their fate is decided with little fanfare. However, the ones that are closest to the center of a tug-of-war debate, with great arguments on both sides, will attract the piling-on of experts and luminaries to supposedly tilt the scales.

The future will be neither as good as the utopian’s dream nor as bad as the fatalists envision. It will be somewhere in between. But the future can be fun. And if it can be fun, in the famous words commanded by Star Trek’s Captain Jean-Luc Picard, “Let’s make it so!”