Lessons from the Ancient World 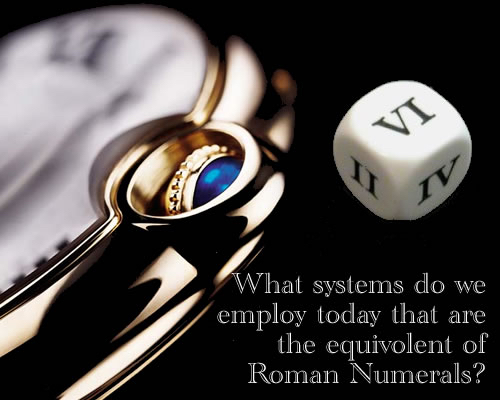 During the time of the ancient Greek civilization several mathematicians became famous for their work. People like Archimedes, Pythagoras, Euclid, Hipparchus, Posidonius and Ptolemy all brought new elements of thinking to society, furthering the field of math, building on the earlier work of Babylonian and Egyptian mathematicians

A few generations later the Romans became the dominant society on earth, and the one aspect of Roman society that was remarkably absent was the lack of Roman mathematicians. Rest assured, the scholarly members of Roman society came from a good gene pool and they were every bit as gifted and talented as the Greeks. But Roman society was being held hostage by its own systems. One of the primary culprit for the lack of Roman mathematicians was their numbering system – Roman Numerals and its lack of numeric positioningWhile its easy for us today to look at Roman numerals and say that it was a pretty stupid numbering system, it was just one of many inferior numbering systems in ancient times. But the feature that made Roman numerals so bad was the fact that each number lacked specific numeric positioning and was in fact an equation, and this extra layer of complexity prevented people from doing higher math.

Roman numerals were a system problem, and a huge one at that. They prevented an entire civilization from furthering the field of math and science

Roman society was so immersed in their numbering system that they had no clue that it was preventing them from doing even rudimentary math such as adding a column of numbers or simple multiplication or division, a feat still handled by abacus. It also prevented them from creating some of the more sophisticated banking and accounting systems and restricted academia from moving forward in areas of science, astronomy, and medicine.

Ratchet forward to today. We live in a society where virtually everything is different than the days of the Roman Empire. But what seems so counterintuitive to most is that we are even more dependent today on our systems than the Romans ever were. Most of these systems we take for granted – systems for weights and measurement, systems for accounting, banking, procurement, managing our traffic, and labeling our food. With each of these systems we are much like the Romans, immersed in the use of these systems to a point where we seldom step back and question the reasoning and logic behind them.

Our systems govern virtually every aspect of our lives. They determine how we live and where we live, what we eat and where we work, where and when we travel, how much money we will make, the job we do, the friends we have, who we marry, and even how long we will live. But much like fish not understanding what water is, we seldom step back to understand the context of our existence

As a starting point, one question we should be asking is “What systems do we employ today that are the equivalent of Roman numerals that are preventing us from doing great things?

This simple question is very revealing. It has a way of opening a Pandora’s box full of friction points, inefficiencies, and flow restrictors that we contend with every day. Our systems are what govern the flow of commerce, govern our effectiveness as members of society, and create much of the stress we face on a daily basis.

After studying American systems and applying this “equivalency to Roman numerals” test, it is easy to conclude that we are only operating at somewhere between 5-10% efficiency, maybe less. The upside is huge

So what are some examples of restrictive systems that are preventing us from doing great things? Here are just a few examples:

Lest you think the US is the only country with system problems, consider some of the major issues plaguing other countries:

Much like the rest of the world, we are a long ways from optimizing the systems that govern our lives. Inefficiencies have become a way of life with most people resigned to “leave well enough alone”.

But the freedom that we value so highly in the US is only a fraction of what it can be. Our ability to confront and deal with some of the big problems ahead is highly dependent upon our ability to seriously reinvent society,,,,, one system at a time.

← Why Do We Fear the Future? The Complexity Disease →