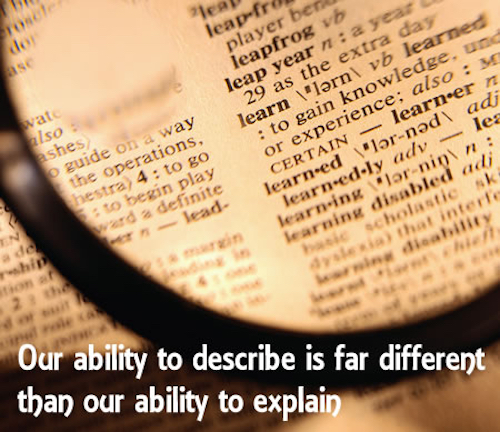 A definition states what a word or concept means, while a description identifies properties or qualities of things.  Both of these answer the question, “What?”

However, to fully grasp a difficult concept, we need an explanation.  An explanation answers the question, “Why?”

As we wade through the knowledge base of science, it becomes easy to confuse definitions and descriptions with having a thorough understanding of a topic.

To better clarify this concept we need to first look at past efforts to define the world around us.  Let’s start with the creation of the dictionary and the word battles that took place two centuries ago.

“A powerful attraction exists, therefore, to the promotion of a study and of duties of all others engrossing the time most completely, and which is less benefited than most others by any acquaintance with science.” – Charles Babbage, English mathematician, philosopher, and mechanical engineer who originated the idea of a programmable computer

History of the Dictionary

The Erya, one of the earliest known dictionaries, is still in existence today in an abridged form.  It was written in Latin during the reign of Augustus in 50 BC.

The first true English dictionary was Robert Cawdrey’s Table Alphabeticall of 1604, although it only included 3,000 words and the definitions it contained were little more than synonyms.

Later, in 1755, Samuel Johnson is credited with the 8-year task of producing the Dictionary of the English Language. This official guide to the English language contained 40,000 entries.

In 1806, Noah Webster’s first dictionary was published using the Bible as the basis for many of his definitions.  Webster, who was intent on forging a distinct identity for the American language, altered spellings and accentuated differences in meaning and pronunciation of some words. This is why American English now uses the spelling color while the rest of the English-speaking world prefers colour.

Christian Technologies, a software development company for Christian organizations, gives their view of the work of Noah Webster.

“No other dictionary compares with the Webster’s 1828 dictionary. The English language has changed again and again and in many instances has become corrupt. “The American Dictionary of the English Language” is based upon God’s written word, for Noah Webster used the Bible as the foundation for his definitions… The 1828 dictionary reflects our nation’s Christian heritage, and the Christian philosophy for life, government, and education.”

But for all his support among the Christian community, Noah Webster as a person was not well liked.  Bill Bryson, author of The Mother Tongue, pulls no punches:

“Noah Webster (1758-1843) was by all accounts a severe, correct, humorless, religious, temperate man who was not easy to like, even by other severe, religious, temperate, humorless people. A provincial schoolteacher and not-very-successful lawyer from Hartford, he was short, pale, smug, and boastful… Webster was a charmless loner who criticized almost everyone but was himself not above stealing material from others… He credited himself with coining many words… which in fact had been in the language for centuries…”

The British were also not fans of Webster and his dictionary.  For a number of reasons they thought they could do a better job.

In 1879, the British Philological Society launched their effort to create the Oxford English Dictionary.  As a gauge of their thoroughness and determination the new dictionary was scoped out to be a four-volume, 6,400-page compendium.

Original estimates were for this to be a ten year project, but after five years of work and only progressing as far long as the middle of the “A” section, they had to re-think their schedule. Eventually, in 1928, a full 30 years behind schedule, the completed New English Dictionary was published. Instead of 6,400 pages in four volumes, the Dictionary contained a mind-numbing 400,000 words and phrases in ten volumes. The end result was essentially worthless because it was far too complex and cumbersome for people to use.

The history of the dictionary has been all about defining words and concepts.  People who worked on these projects spent their lives immersed in a world of linguistical correctness.

History of the Encyclopedia

The encyclopedia had a much different beginning.  While dictionaries were good at defining things, they did a poor job of describing things.

The encyclopedia, as we know it today, was developed from the deficiencies of the dictionary in the 18th century. A dictionary primarily focuses on words and their definitions, but left reader still lacking in understanding of the meaning and significance of a term, and how the term related to a broader field of knowledge.

To address that need, an encyclopedia treats each subject in more depth and conveys the most relevant accumulated knowledge on that subject or discipline, given the overall length of the particular work. An encyclopedia also often includes maps and illustrations, as well as bibliography and statistics.

The idea of collecting all of the world’s knowledge into a single work was an elusive vision for centuries. Many writers of antiquity (such as Aristotle) attempted to write comprehensively about all human knowledge. One of the most significant of these early encyclopedists was Pliny the Elder (first century CE), who wrote the Naturalis Historia (Natural History), a 37-volume account of the natural world that was widely copied in western Europe for much of the Middle Ages.

The Chinese emperor Yongle of the Ming Dynasty oversaw the compilation of the Yongle Encyclopedia, one of the largest encyclopedias in history, which was completed in 1408 and comprised over 11,000 handwritten volumes, 370 million Chinese characters, of which only about 400 remain today.  In spite of this impressive accomplishment, the end result was once again, essentially worthless, because it was far too complex and cumbersome for people to use.

The Encyclopedia Britannica found it’s origins in Scotland. The founding team included Colin Macfarquhar, a tough-minded printer, the scholarly William Smellie who handled most of the writing, and illustrator Andrew Bell. The first edition, hitting the market in 1771 took four years to complete.

In spite of a somewhat distorted view of the world, where entries for curing diseases in horses received 39-pages of coverage, while the entry for woman simply said “the female of man,” the volumes sold well.

With a successful first edition under their belts, a systematic process was put into place to revise and update the information, turning encyclopedias into a significant industry, an industry dedicated to defining and describing the world around us.

Similarly, scientists throughout history have resorted to relentless experimentation to first define the characteristics of phenomena, and through this system for defining limits, they were able to describe the nature of science.  But somehow lost in all this defining and describing is the answer to our children’s most incessant question – why?

Nanotechnology is no exception.  It is a science masked in detailed definitions and descriptions, but is lacking fundamental information about “why” things work the way they do.

As a futurist, I spend much of my time trying to establish the fine line between what we know and what we don’t know.  Beyond the known, lies the future.  This is fertile territory for research and fertile ground for anticipating the world to come. For instance:

One of the crazier aspects of quantum mechanics is that a pair of subatomic particles can sometimes become “entangled.” This means the fate of one instantly affects the other, no matter how far apart they are. It’s such a bizarre phenomenon that Einstein described it in the 1930s as “spooky action at a distance,” saying it showed that the emerging model of the atomic world needed rethinking.

In 1997, scientists separated a pair of entangled photons by shooting them through fiber-optic cables to two villages 6 miles apart. Tipping one into a particular quantum state forced the other into the opposite state less than five-trillionths of a second later, or nearly 7 million times faster than light could travel between the two. With the theory of relativity concluding that nothing travels faster than the speed of light, we are left in a quandry over the speed of information exchanged between particles.

Even the best theories to explain “entanglement” end up sounding absurd. As an example, one theory speculates that signals are shot back through time. Whatever the final answer turns out to be, the answer is bound to be unnerving. According to a famous doctrine called Bell’s Inequality, for entanglement to make sense in terms of relativity, either we have no free will or reality is an illusion. Great options.

We currently do not have an “encyclopedia of what we don’t know.”

A Description is Not an Explanation

← Nanotech and the Precautionary Principal Libraries of the Future →