Dr. Seuss, the Grandfather of Nanotechnology 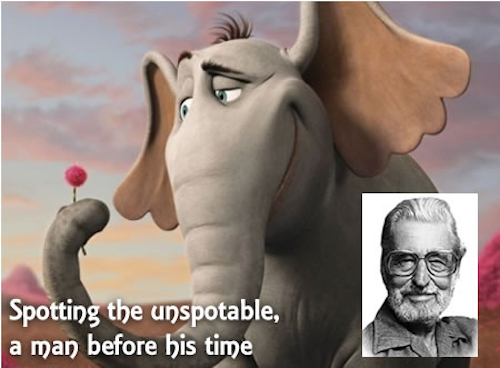 Long before the physics of nanotechnology, a dreamer’s dream sparked the world’s imagination

Known to most by his pen name, Dr. Seuss, Theodore Geisel lived a life in a magical world populated by unusual characters – characters who are not so refined that a dinner invitation he would decline, he once said with a wink, I think.

Like so many of us, I was raised with the bedtime stories of cats in hats and grinches that stole Christmas. Geisel’s imagination, it seems, had no bounds.

It should come as no surprise that on one dark evening, Geisel had an epiphany, which he put into words in a way that only the Seuss-master could produce. In 1954, he crafted Horton Hears a Who, a nothing-less-than brilliant glimpse into a world of the small. For those unfamiliar with nanotechnology, and many you are, reading about manipulating matter will take you very, very far.

Motivated by his growing fears of the atom bomb and his struggle to understanding how something so tiny could loom so large, Geisel was inspired by a visit he made to Japan in 1953. On this trip he was searching for some understanding of how American occupation had influenced young people there. What he found was that few were still interested in militarism, but most had become fascinated by the ways of the West.

On his opening pages of Horton Hears a Who, the good doctor dedicates the masterpiece to “my good friend Mitsugi Nakamura,” a Kyoto University professor he met on his tour of Japan. While the Whos were intended to represent children of a minority population, he was obviously thinking of the Japanese when he created the tiny occupants of a very small planet. 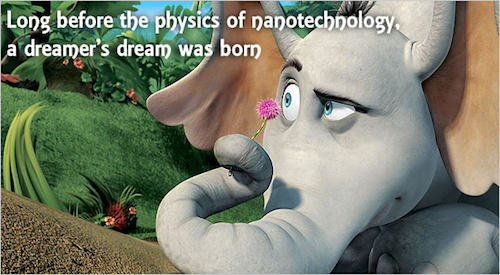 The book tells of Horton the Elephant who one day, on the fifteenth of May, in the Jungle of Nool to be precise, hears a small speck of dust talking to him. It turns out the speck of dust is actually a tiny planet, home to a city called “Who-ville,” populated by microscopic inhabitants known as Whos.

The Whos ask Horton (whom, though he cannot see them, is able to hear them quite well due to his extraordinary hearing) to protect them from harm, to which Horton happily obliges, proclaiming throughout the book that “a person’s a person, no matter how small.” In doing so he is ridiculed and nearly killed by the other animals, among them Wickersham Brothers, and the sourpuss Jane Kangaroo and the small kangaroo in her pouch. Horton’s crime was believing in something that they are unable to see or hear. Horton implores the Whos to make themselves heard to the other animals, lest they end up as part of “beezlenut stew.” The Whos succeed.

Important to Geisel’s message, the Whos finally make themselves heard by enlisting all members of their society to play their part. In the end it is the smallest Who of all, Jo-Jo, who provides the last tiny boost of volume to be heard. The moral of the story: “a person’s a person no matter how small.”

While far from the rigors of hard science, the notion that some super small and exciting world may exist beyond the limits of what our eyes can see, was quite revolutionary.

Far away from Giesel’s story-telling studio, it is rumored that Richard Feynman, the famous Nobel Prize-winning physicist, was reading a copy of Horton Hears a Who when he began formulating his ideas for his famous 1959 paper titled There’s Plenty of Room at the Bottom. This paper, written for a lecture within the physics community, was the first ever on nanotechnology, and commonly referred to as the origin of the current nanotechnology industry.

I suspect the playful style of Dr. Seuss’s storytelling has had a significant influence on other people’s lives as well.  And even though many in the science community may object, I like to think of Dr. Seuss as being the most deserving of the title, “The Grandfather of Nanotechnology.”

← Seven Predictions for the Coming Age of Micronations Altering Our Dependencies... one snip at a time →