There’s one specific use case for drones that I’ve been thinking about for the past decade, waiting for it to get implemented – active policing with streetlight drones using AI technology.

Yes, drones are already used in a variety of passive police work situations – monitoring crowds, search and rescue in remote areas for criminals or lost citizens, and crime scene documentation. But having drones automatically deployed based on specific sounds heard in a city that’s different.

Picking Up Where ShotSpotter Leaves Off

When it comes to audio-based, rapid police response, though, law enforcement up to now has relied on very impressive fixed-base ShotSpotter technology. The system uses sound sensors strategically placed high up on buildings and other structures throughout an urban area.

When these sensors detect what might be a gunshot, AI technology quickly determines if it in fact was a gunshot. Then it identifies the exact location within a few feet based on triangulation calculations from multiple sensors. This data is confirmed and then passed on to local law enforcement. According to the company, this location identification process happens within 60 seconds.

But then the response lag begins. Depending on many circumstances, responders typically won’t arrive on the scene for another few minutes at the earliest. A lot can happen in those next few minutes. Victims can die, and assailants can leave the scene.

From a policing standpoint, the sooner they can “get eyes” on a situation, the quicker they can respond in the best possible fashion.

Placing policing drones with surveillance cameras in strategic areas throughout a city, such as on streetlights, and enabling remote or autonomous operation puts them in a position to do far more policing quicker than it would otherwise happen. The alternative is to bring the drones on the scene and then deploy them, which is also too slow.

Remote drones will reduce these response time lags and be the first eyes on the scene. How much policing they are allowed to do once they arrive on-site remains to be seen.

The Louisville Kentucky Metro Police Department could be the first police force in the country to put this capability to use. They first need to get a waiver from Federal Aviation Administration (FAA) regulations that require line-of-site drone piloting and prohibit anyone from flying drones above populated areas or at night.

Specifically, the Louisville Police would like to sync their ShotSpotter system with a fleet of remotely dispersed autonomous drones so that upon confirmation of a gun discharge the drone would self-route to the site and surveil activity on the ground.

Conceivably, these dispersed drones could also be dispatched to fly via remote control or autonomously for immediate surveillance upon receipt of a critical 911 call.

In these cases, once the drone gets on the scene, flight controls could be taken over by a remote operator who then could position the drone and control the cameras, sensors, and other instruments to maximum their response. 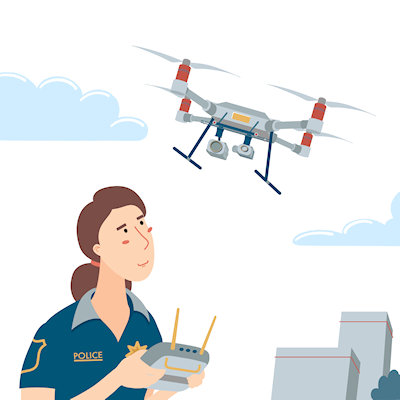 This will be a huge step forward in policing and protecting lives. Early eyes on the scene are critical for an informed human response as well as for documenting conditions on the scene before they’re disturbed.

As with most technology, there are many benefits and also a few areas of concern in deploying this kind of response technology. The benefits of these early eyes on a potential crime scene are clear, though:

At the same time, there are a couple of downsides to this as well that may need to be worked out before this is widely deployed.

If you’ve been reading this column for a while, you probably already know that the perfect IT solution doesn’t need to be the enemy of a very good IT solution. With proper safeguards and prudent policies, these rapid response drones will save lives and possibly even minimize criminal activity. Over time, we’ll quickly maximize the positives of this approach to policing.

Some have suggested that we should arm the drones with lethal force as well.

While I don’t see this type of urban drone policing going that far, it will just be a matter of time before these police response drones have non-lethal capabilities and place those tools under the control of remote operators. Some of those scenarios might include:

Adding AI drones to the resources available to law enforcement will certainly change the rules of street life. The quicker response times will not only help identify and build a case against a suspect but also add a measure of security for law-abiding citizens.