Over the past few years, I’ve spent countless hours driving through dozens of states on the east coast, west coast, southern states, and the Midwest. And none of these states have done a good job addressing the escalating need for more public bathrooms. Some states are cutting back on their rest stop locations due to budget cuts.

In their place, gas stations, convenience stores, truck stops, fast food establishments, and coffee shops seem to pay little attention to a person’s non-consumptive needs. It’s not uncommon to stop at three or four places before finding a restroom that’s not “out of order.” Cleanliness is another matter, but most people would settle for something functional.

I never really paid much attention to issues of this type before, but the challenges seniors face are now hitting much closer to home!

And it also got me thinking about all the locations and circumstances where the lack of public bathrooms is a very real issue and how that might be resolved in the future.

Restrooms – A Public Good … and Right

Access to restrooms in a number of settings, not just along our major roads and interstates, is seen today as a basic human right and a public necessity, just like access to food, water, and shelter.

The issue is larger and even more timely in urban areas. That fact quickly became apparent during the pandemic, when many private dining facilities, including the coffee shops and fast-food restaurants that we all considered “public” with a wink and a nod, suddenly were closed to walk-in traffic.

And moving forward, many of those same, now re-opened establishments, including Starbucks, will no longer open their restrooms to the general public, including homeless people for whom those restrooms are not just a convenience but a necessity.
\ 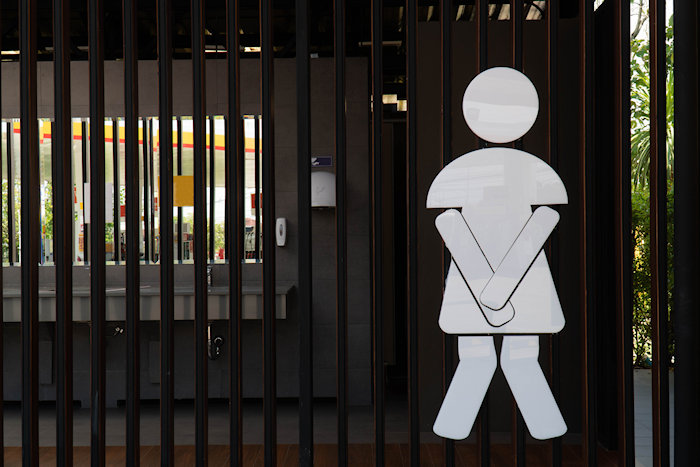 Cities are Stepping Up

Providing restrooms for the public will once again be firmly in the province of public officials and the budgeting process. In the future, many localities and states will pass legislation expanding access to public restrooms, whether in public buildings and parks or in the form of standalone facilities or even futuristic versions of what we all know now as “porta-potties.”

A bill is pending in New York City to require the establishment of at least one new public restroom in each of the approximately 200 zip codes in that city. Portland was a pioneer in this area with its solar-powered, minimalist, easy-to-clean “Portland Loo,” a concept implemented in many other jurisdictions.

And what about reverting back to pay toilets? Creating a modest financial cost to help pay for upkeep and to help keep mischief makers from abusing a good thing seemed like a reasonable idea 50 years ago. But society ultimately pushed back on the idea of making people pay to access this public good – equating it to making someone pay to use a public drinking fountain.

A Matter of Public Benefit

For most Americans, access to restrooms in their hometown is not an issue. If they’re out and about, they know about “friendly” retail establishments they can pop into. Most people have the resources to purchase a bottle of water, a small coffee, or a fountain drink at private establishments to “buy” the right to use their bathroom … and avoid dirty looks from employees and patrons.

But even if the average person might be reluctant to see the need for public funding for restrooms, they should know that the alternative for too many people is public urination or defecation. That opens the door to a world of public health threats, including hepatitis A.

An analysis by the World Bank showed that the cost-benefit ratio of providing basic sanitation services in the urban areas of developed countries was 3.5. Yes, a $1.00 public expenditure on this infrastructure yielded $3.50 worth of public good in terms of reduced medical costs and increased productivity.

Admittedly, the first thought of most people who have experienced deplorable restrooms in public and other shared settings is how a city like New York will ensure each public restroom remains clean and functional.

One option is to have them serviced by city employees, but that can be expensive, and the facilities might effectively be out of reasonable commission for hours or days at a time as these unfortunate workers make their rounds.

Instead, in New York City and elsewhere, we’ll soon have city-wide access to self-cleaning public toilet booths or pods, a technology already being utilized in certain cities, especially in Europe.

In contrast to the Portland Loo public restroom model, there are many ingenious, self-contained, self-cleaning bathroom pod designs with automated systems that clean and sanitize the space and the fixtures between each use.

New York City tried this approach for a handful of pay toilets more than a decade ago. The program at the time called for 20 of these self-cleaning toilet pods with a user fee of 25 cents per visit. Only 5 of the pods were ultimately installed, but all of them reportedly are still in use today.

The often unstated but widely shared concern regarding truly public restroom facilities is that they can be the site of criminal and nefarious activity – assaults, vandalism, drug use/commerce, and sexual encounters, for example. But many of the new designs, and even the previous generation, non-automated Portland Loo model, make this less likely than is commonly thought.

Yes, public automated toilet pods are in our future, whether in the heart of the city or off the interstate in the heartland of our country.

With some models under consideration, the floor may be wet after each cleaning, but users can be assured that the wetness is only due to disinfection!

As I’ve said in the past, the number of governmental bodies in the U.S. is reaching a staggering number – 90,000. During normal economic times, there is plenty of money to go around, but now every city, state, county, parish, township, and special taxing district is competing for the same tax dollars, and issues like a rapidly escalating bathroom crisis are simply not receiving the attention it deserves.

As you might have guessed, it will be up to us to solve the problem locally before anything happens on a larger scale. So please feel free to voice your opinion. Your future bladder needs will thank you later.