7 Trends to Watch in 2010 – Colleges Face the Perfect Storm 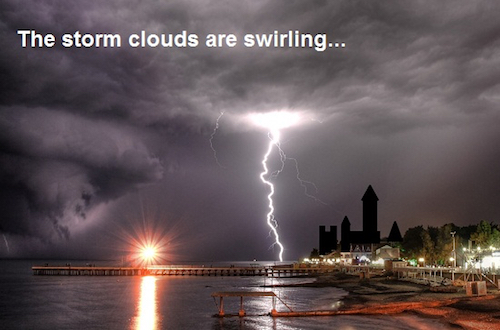 After looking at all the signals, there is no other way to describe it. Colleges are under attack.

Several legs of the financial stools upon which they are sitting have been kicked out from under them, forcing higher tuition rates on an already cautious base of consumers. But money is only part of the equation. Cultural shifts, technological advances, and changes in customer perceived value are all working to create the perfect storm for colleges.

To the carnivores of the free enterprise system, the slow lumbering gate of colleges today makes them look like easy prey. But they bring with them tremendous inertia and the longstanding loyalties and traditions of generations past.

The true effects of this storm front have been masked by higher enrollments, as people without jobs opt to go back to school and hit the reset button for their next career. But that is about to change.

Much like Henry Ford’s “control everything” approach to building cars at the River Rouge Plant where raw materials were brought into one end and finished cars rolled out the other end, colleges have maintained tight control over virtually every aspect of the academic food change.

Professors are carefully recruited, classroom times and schedules are thoroughly planned, courses are tightly prepared, degrees are framed around in-house talent, and academic accomplishments are meticulously positioned to help brand the experience.

Those days are numbered.

While there are many areas subject to change, the primary attack points will be the six areas where colleges are most vulnerable:

1. Money – As the cost of colleges skyrockets, student loans and financing are becoming harder to get. Here’s what’s going on.

Many states are hurting financially, and they are cutting their support for colleges. As an example, ten years ago the price of tuition at the University of Virginia, excluding room and board, was just over $4,000 for in-state students and nearly $17,000 for out-of-state students per year. Now it’s nearly $10,000 and $32,000, respectively.

Similarly, the State of California slashed their support for colleges by 20% causing the state board of regents to increase tuition by 32% in 2010.

Exacerbating the deficits are losses to college endowments, which declined significantly with the losing stocks in their portfolios.

At the same, student loans are getting hard to come by. Students can individually sign up for the government-backed Stafford loans, but they have limits of $5,500 a year. The other major type of federally backed student loan – the Parent PLUS – has no limit, but it requires the parents to co-sign, making them responsible for repayment. To make matters worse, the interest rates for these loans have nearly doubled in the past five years.

Most college students have relied heavily on credit cards to handle personal expenses while they were in college. However, congress passed a bill in May that will dramatically restrict the issuance of credit cards to anyone younger than 21. Consumer groups helped push the measure through because credit card companies have been praying relentlessly on naive college kids, charging hidden fees and exorbitant rates. According to Sallie Mae, 84% of college students have credit cards, carrying balances of more than $3,000.

Parents are also struggling to help out because they are losing access to home equity loans. The availability of money to homeowners through home-equity lines of credit has fallen by 25 percent in the U.S., to $538 billion, since the end of 2007, according to federal data.

In our fast-paced society, student thinking can change quickly, and the forest of red flags now being raised spells troubling times ahead.

With entrepreneurial minds cleverly attacking the flow of money currently being allocated to colleges, even seemingly minor changes will have profound effects as revenue streams change course and build momentum around alternative forms of education.

2. Courses – Our existing semester and quarter-based college schedules are a poor match for today’s plugged-in, hyper-jacked students. Passed down from generations past, the current timetables for courses spread out over 8-12 weeks only works for an increasingly small segment of society, leaving most working adults to fend for themselves.

With courses being so narrowly defined, colleges are leaving massive opportunities up for grabs, and the vultures are beginning to circle.

Courses are on the verge of being fragmented into smaller, faster learning units. The goal will be to turn individual courses into bite-sized morsels of learning that fit into virtually anyone’s schedule.

Similar to the way Wikipedia and iTunes have evolved future courseware authoring systems will be rooted in a templated process that allows topical experts to turn their expertise into quick learning modules. With the proper monetization system where money is parceled out to course authors as well as other critical elements in the delivery system, the resulting structure will become an organic explosion of easily digestible knowledge.

Courses will be available on-demand, anywhere, anytime, to satisfy virtually any need, desire, or interest. They will be easily affordable, universally available, and presented to the students in a fashion most comprehendible to their style of learning.

3. Teachers – As new economic realities hits college campuses, their first impulse will be to cut staff. Some will attempt to limit the damage to wage freezes and curtailed hiring, but others will begin to roll out the pink slips.

Research institutions will focus heavily on grants and corporate alliances to rebuild the revenue streams of the past.

As prospects for a long-term future inside academia grow dim, corporations will take notice of the fertile talent base and begin offering “greener pastures” for professors and teachers.

Austrian economist Joseph Schumpeter once described entrepreneurial innovation as a “perennial gale of creative destruction,” forcing existing companies to adapt or fail. “Economic progress in capitalist society,” he declared, “means turmoil” and that will be particularly true for colleges.

4. Classrooms – There has long been the pervasive notion that learning can only take place in a classroom. Even though schools use field trips and outdoor experiences to enhance education, the classroom remains a dominant central fixture in education today.

Classrooms are designed to focus attention, close off the rest of the world, and create a controllable environment where learning can take place. The person or education system that controls the classroom also controls the time when learning can take place, the students who will participate, the lighting, the sounds, the media used, the tools, the pace, the subject matter, and in many cases, the results.

However, classroom-centric education is not necessary for learning. Our need to physically “gather at the feet of the master” will be replaced with faster, easier systems for connecting thoughts and ideas. If the objective is simply to get credit for a course, the convenience of an anytime, anyplace delivery mechanism will be the most salable feature. For students who want to truly understand the material, a more apprentice-like approach will serve as the primary attractor.

In the future, the cost and overhead burden of maintaining classroom space will be closely scrutinized as financial pressures force colleges to get creative. Each change will feel like a grand experiment, but the advantage will swing towards the virtual classroom where the overhead costs of facilities, classroom schedules, and alarm clocks no longer matter.

5. Credits – What types of learning are credit-worthy?

In the future, this question will be at the heart of new course offerings as they work their way into the marketplace.

Learning takes place from the moment a person wakes up in the morning until they fall asleep at night. In fact, most of the time, learning continues even when a person is sleeping. Yet only a small subset of the learning that takes place has been dubbed “credit worthy.”

College credits are a rare form of currency assigned to the value to what a student learns. As credits accumulate, they are used to “buy” a diploma.

Credit granting authority has been relegated to accredited institutions and is protected with laws and systems that are closely guarded by people inside the system. There is no one central authority for determining credit-worthiness. Rather, each institution, once accredited, decides for itself.

Credit-granting authority will be the most difficult area for outsiders to penetrate. But rest assured, when the economic foundation of colleges begins to feel shaky, the creative opportunists will begin to emerge.

Things like co-branded courses, experience-based credits, and alignment with professional society certifications will begin to emerge to provide much-needed revenue streams for colleges. Each opportunity will be a challenging decision, but every change will dilute the sanctity of the credit system, creating precedent for others to follow.

6. Status – Academic elites have long been drinking the Kool-Aid, espousing the gospel of superior standing in one’s community that can only be achieved through diplomas and scholarly achievement. With a record numbers of college graduates now unemployed and under-employed, the bragging rights have begun to tarnish.

Academic accomplishments do not always translate into “functional member of society,” and society has been inventing hundreds, if not thousands, of new “status” markers. Professional certifications, individual accomplishments, note-worthy projects, association memberships, achievement awards, and even being employed by a pedigree corporation will often carry far more weight than the status gained through a college degree.

So what kind of status will be used to open doors in the future? Look for marketing messages to appear as “more valuable than a degree at Harvard” or “a better entrepreneurial experience than attending Stanford or MIT.”

A college’s ability to sell its elite status will increasingly be met with resistance as we move into an era of austere frugality.  Our claims of accomplishment, self-worth, confidence, and respect are destined to shift along with the changing face of the institution.

Rest assured the coming war on colleges is not being waged by societal misfits or some rouge band of college haters. Instead, it will come from some of our most admired companies and people with every bit as good of intentions as people working inside colleges.

We are entering a grand age of experimentation. The biggest opportunities for colleges and universities lie in the unchartered territory outside of their current domain. They can be found in the disruptive thinking and disruptive technologies described here and here.

Colleges will need to position themselves on the bleeding edge of what comes next.

For college professors and teachers, their biggest opportunity will lie in their ability to syndicate their work and reach the widest possible audience.