Virtually everywhere you look there are video screens. You see them in bars and restaurants, on elevators, in the back of taxis, and on airplanes. Even most cell phones have now have video screens. Some are connected to the Internet and others are connected to cable television, two distinctly different uses for what amounts to the same screen technology.

In the future, people will look back at this time and see it as very confusing. Corporate turf battles have slowed the promise of the everything display where all content is available through all screens. And in many cases the public wasn’t ready to make the leap. All of that is about to change.

Cable TV companies and the major television networks are not going to like the years ahead as their market shares of the video content world begin to dwindle.

Until now, consumers have felt ill prepared to deal with the dizzying array of options when they enter an electronics store and manufacturers have interpreted that confusion as a marketplace not ready to make the switch.

Greg Belloni at Sony says, “Our stance is that consumers don’t want an Internet-like experience with their TVs, and we’re really not focused on bringing anything other than Internet video or widgets to our sets right now.” A widget is an industry term for narrow channels of Internet programming like YouTube or Hulu.

Bob Scaglione, Senior VP of Marketing at the Sharp voiced a similar comment. “I don’t think that consumers are yet ready to access all content on the Internet on their TV. For now, it’s more important to deliver content consumers want on a TV and let them do their browsing on a PC.”

Industry analysts also make the point that watching television is an entertainment activity where people lean back in their couch and disengage. Browsing the Internet, as the thinking goes, is a more immersive, lean forward activity, where the brain is in both output and input mode.

However, that argument has already been disproved with the iPhone, a do-everything device that has met with raging success. 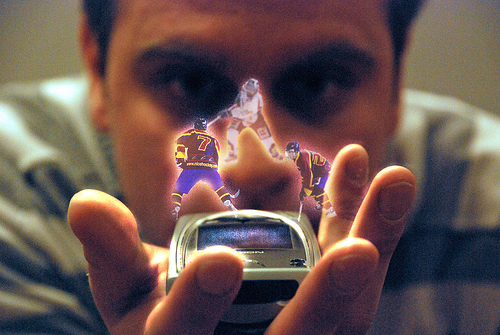 3D video coming soon to a cell phone near you

Most of the problems leading up to the convergence have centered around the design of the interface. Consumers have become well-versed in working with browsers and surfing the Internet. And most have logged time working with game controllers found in the likes of Wii and Xbox. But they feel like they took a step back in time when they try to work the cable TV controls to access a television show or movie.

The Consumer Electronics Show next week in Las Vegas will feature TVs with direct Internet connectivity, or with on-screen access to content sites such as YouTube, Blockbuster and Netflix. As online video becomes intermingled with the living-room TV experience, a new consumer-friendly television interface will emerge, and downloading and streaming content services will take on a major role in the home entertainment ecosystem.

Here are some of the key data points to consider:

With the economy showing signs of improvement, and people have already started to wash their hands to rid themselves of the past decade, the consumer marketplace is preparing for some long overdue changes.

If Apple were to start manufacturing their own televisions, they would quickly dominate the consumer TV marketplace because they know how to build an interface. Significant opportunities will be found in the design and implementation of next generation interfaces.

Video search technologies continue to be an area ripe for innovation. So far no one solution has really risen to the level where video search results are comparable to searching text.

Major opportunities can also be found in the aggregation and delivery of video content, and most importantly, the advertising and marketing mechanisms used to monetize the content.

Most living room furniture will need to be redesigned to match the needs of the active/passive uses of next generation Internet TV.