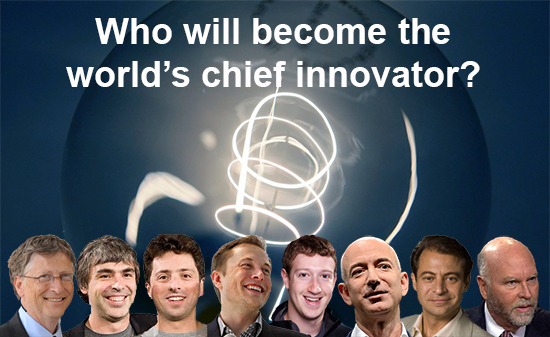 When Thomas Edison died he left a gaping hole. He was credited with inventing everything from the electric light bulb, to the phonograph, to the movie projector, to the stock ticker, to the motion picture camera, to the entire movie industry.

He lived during an age of great inventors like Henry Ford, George Westinghouse, Nikola Tesla, Alexander Graham Bell, Marie Curie, the Wright Brothers, Edwin Land, and Harvey Firestone. But it was Edison’s name that rose to the top.

While he had many detractors, Edison’s name was revered by millions, creating generations of Edison wanna-bees. Businesses found this to be a threat to their influence and control and began forcing all new-hires to sign over the rights to their inventions during their time of employment. And so the great age of inventors came to an end… at least for a while.

When Steve Jobs came along, he brought with him a flair for the same kind of PT Barnum-showmanship that kept Edison in the news. Along with ushering in the personal computer era, Jobs was the chief visionary behind everything from the iPod, to the iPhone, to the iPad, and was the founder of Pixar animation studios.

Some went so far as to describe Jobs as the “Father of the Digital Revolution.” However, when Jobs died, the world has once again been left with a huge void.

But times are different now. We live in a global marketplace. Most large companies have lost their ability to innovate. Startup incubators are cropping up everywhere and money for startups is readily available through crowdfunding, angels, VCs, and both acquisitions and IPOs are back as viable exit options.

With these and many other forces in play, creative individuals are feeling empowered like never before, and several are lining up to claim the now open title of “World’s Chief Innovator.”

Here’s a look at some of the contenders and why we’re in for some dramatic times ahead.

“The true innovator is not bound by traditional thinking!”

The New Path of Innovation

Hollywood loved to portray the old fashion inventor as a mad scientist developing Rube Goldberg devices in his garage while espousing some crackpot theory of physics as he proceeded to blow up more than a few things along the way.

On the other end of the spectrum, today’s Tony Stark computer genius-type inventor is never being more than 10 keystrokes away from whatever information is needed and able to compress eight years of product development into 5 minutes with the aid of a room-size interactive hologram and an ability to gesture-manipulate components on the fly.

The true innovator is not bound by traditional thinking. While not all innovation includes the early-stage invention or discovery phase, it does involve bringing the vision to life.

That said, there are many different kinds of innovators. Here are a few of the novel ways innovation is currently taking place:

This is far from an exhaustive list of how and where innovation can take place, but a few to stimulate your thinking as to the toolsets true innovators will use to break down the barriers before them.

The Race to the Top

A good sign that someone is vying to don the title of “World’s Chief Innovator” is his or her unquenchable thirst to create something new. Having one wildly successful business or product is never enough.

Here are a few of the people that fit this description, with the first eight falling into what we might consider today’s A-list contenders:

The Person Behind Door #3

There are perhaps dozens, even hundreds more that should be on this list. It could be that the most innovative of all hasn’t even revealed themselves yet.

Many of our largest industries are still waiting for a disruptor to emerge. To be sure, we haven’t yet seen the chief reformers for the power industry, healthcare, space tourism, telecom, cable TV, banking, credit cards, and insurance.

At the same time, the biggest innovations of all may actually take place with new forms of government, reinventing the tax code, or developing some new financial system.

“Innovators have a way of being revered throughout history.”

If Linus Torvalds grew up being trained as a mechanical engineer instead of a software engineer, would he have started an open source movement for robots?

If Werner von Braun had known about the Space Elevator in the early 1900s, would we be using one today, or at least be a few years closer to reality?

If Judge Harold Green hadn’t broken up AT&T, would we ever have gotten to the point of developing the Internet?

Innovators come in many forms and have a way of being revered throughout history. While it requires an unusual personality and the path is strewn with hardship and confrontation, the world now views the innovator as the most honorable of all professions.

Even though it hasn’t been acknowledged as a formal race, many are now on a quest to become the most innovative person of all time, or as I like to think of it as the “World’s Chief Innovator.”

There’s an opening. No need to apply, just do it!