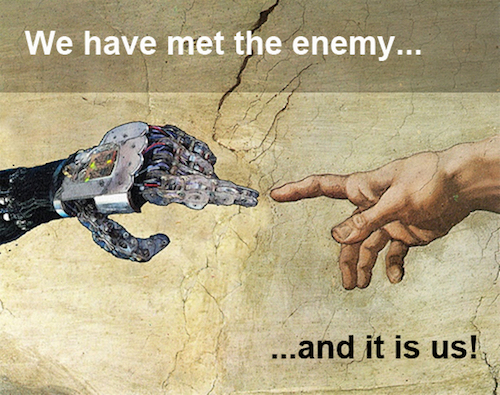 During the late 1990s business and industry began to panic over the issues surrounding Y2K, which later turned out to be mostly manufactured fear.

In the chaotic world around us, it has become increasingly difficult to separate genuine problems from manufactured fear. And it is especially difficult to make plans for the future when we can’t properly gauge the severity of a legitimate issue we know we’ll have to deal with.

As we begin to wrestle with “2 billion jobs disappearing by 2030,” clearly a subject we’ll need to deal with sooner rather than later, it’s easy to get lost in the problems instead of the solutions.

That said, gauging a proper response is not easy. On one hand, dealing with the Y2K issue will seem like child’s play compared to this kind of massive job loss. However, throwing trillions of dollars at it, as we did with the 2007-2008 Global Financial Crisis, may indeed be a wrongheaded overreaction.

For this reason I’d like to talk through the coming era of automation and point out some of the hopeful signs I see for the brighter future that lies ahead. 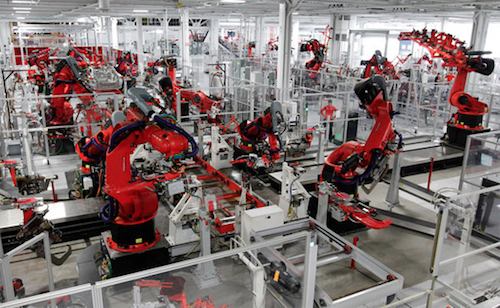 Robots in the Tesla car factory in Fremont, CA

Automating our physical world is easily half a century behind the digitization era that was ushered in with mainframe computers back in the 1960s.

There are many parallels between the large robotic arms that we see in automotive manufacturing today and those early mainframe computers. Seeing big machines in industrial settings, with teams of highly skilled engineers operating them, makes it difficult for us to imagine an equivalent machine in our homes.

Going from mainframe computers to desktops that average people could use was quite a leap.

Transitioning from industrial robots to personal ones will be equally disruptive.

More recently, the transition from desktop computers, to laptops, to mobile devises has caught many people off guard.

With similar stages of mechanization, an equivalent evolution will take us from home-based robots to unusual forms of mobile automation that we control personally.

The Economics of Automation

Without humans there can be no economy.

Generally speaking, when a person buys tools, it increases their capability, and by extension, increases the scope of them as an economic entity.

When a person buys a computer and becomes proficient at using it, this added piece of digitization increases their capabilities, their earning power, and their sphere of influence as a consumer. In general, people with computers earn and spend more than people without computers.

Similarly, people who own cars, homes, and businesses tend to earn and spend more than people without them. Ownership and control becomes part of our personal toolbox, granting us increased capabilities and thereby added clout to our economic entity.

Since the capabilities granted by owning a computer connected to the Internet can be far more scalable than owning a car or home, its influence upon economic theory has been largely underestimated.

We will encounter similar underestimations as we combine the scalability of Internet-connected automation to the capabilities of a person in the years ahead.

From Mobile Communication to Mobile Automation

Smart phones are far more than a communications device. In fact, we have only begun to scratch the surface of understanding the true scope of their capabilities. But putting them into the proper context, they are an extension of the capabilities of the person who operates them.

Over the coming decades we will see a similar transition to smart automation devices that we personally own and operate. They will extend our capabilities in ways we cannot yet imagine, and give rise to business models that leverage the hyper-human capabilities stemming from this shift.

As we look around we see 3D printers springing up in unusual places. 3D printers are a form of automation that has already reached the hacker stages of mid-1980s computers.

In the coming years, when we find ourselves needing a replacement part, we will no longer have to get the part from the manufacturer on the other side of the planet. Instead we will be able to print the part ourselves…. or so we’ve been told.

Printing a physical part to match the exact specifications of the one it’s replacing will require an operator finely attuned to the intricacies of this type of manufacturing.

As an example, not all operators will have access to the right materials. Some parts will require an extra smooth finish or added texturing to make it work. Understanding tolerances, levels of reflectivity, specific gravity, reaction to temperature variations, vibration, or surrounding chemicals are all points of consideration.

Printing our own replacement part is not likely. It will require far more skill and attention to detail than most of us possess. But finding someone close by is indeed a possibility.

So does human-plus-machine equate to greater localization? In most cases, yes.

Competing WITH robots is far different than competing AGAINST robots. When we add machine skills to the resume of an individual we end up with a far different equation.

So the coming decades will be far less about humans competing against machines and far more about how we can leverage them to our advantage.

We are still a long ways from creating Hollywood style robots with an emotional mind capable of making value judgments that we can rely on. But we are very close to leveraging machine capabilities in far more interesting ways.

If we combine the capabilities of a Transformer with the utility of 3D printers and the portability of a Swiss Army knife we can begin to see the possibilities that lie ahead.

Machine-based automation will revolutionize our world every bit as much as computers have.

To answer the questions I posed at the beginning, some of the fear of job loss is real and some of it is manufactured. But what cannot be lost in this discussion is the need for a rapid transitioning skill base where we quickly identify a need and train people to fill it.