Creating the ‘Builders’ of Our Future 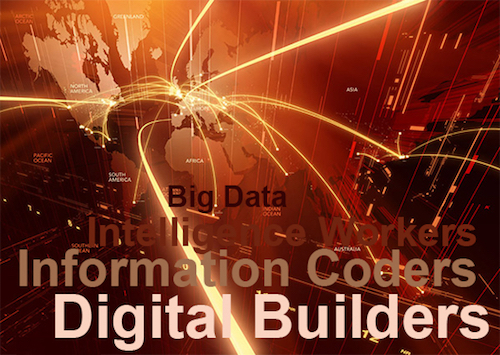 As something of a grand finale to their 11-week, full-immersion Ruby on Rails class, our first graduating class of DaVinci Coders took the stage on Demo Day to talk about the projects they worked on.

To me it was quite remarkable listening to the stories of transformation that occurred as students with no coding background whatsoever managed to immerse themselves in this new field and produce some extraordinary apps.

This class represents the next generation of “builders” who are taking over the world, because inside these lines of code lies the foundational underpinnings of the future.

Builders of the past have included people like architects, manufacturers, construction workers, and material fabricators. However, people in those professions are passing the baton to a new breed of builders skilled in things like digital architecture, intelligence work, and information fabrication.

To paraphrase the famous words of President Kennedy, “We choose to go to the moon, not because it’s easy, but because it’s hard.” Creating a digital foundation for our future will indeed be hard, but here’s why we should be welcoming this challenge.

The War Between Atoms and Electrons

While most people don’t think of it this way, there is a war going on between atoms and electrons. Atoms represent everything in the physical world and electrons are the embodiment of our digital world.

Digital products are being created exponentially faster than anything that requires the manipulation of physical materials. Companies today are making conscious decisions about whether they should be working with physical products or digital ones.

Physical products require the use of raw materials, designers, engineers, shipping & receiving, inventory, warehouse space, shelf space, marketing & sales, and most importantly, physical products have tax implications. Digital products, on the other hand, can eliminate 90% of the work involved in producing and distributing material goods.

Companies producing digital products are moving far faster than those creating physical ones, simply because they can.

As a result, we are witnessing a brain drain as employees leave their physical-world jobs in transportation, manufacturing, and service industries to move into positions in digital companies because that is where all the excitement is.

People moving into the information space, like the students at DaVinci Coders, are at the forefront of this cultural shift.

Baby boomers have become a generation of shedders. Gone are the days of them seeing who can own the most stuff, and as they head into retirement, we are seeing increasing amounts of stuff headed towards the trash heap. As they pursue a more manageable lifestyle boomers are “shedding” their belongings.

However the boomers are not alone. Virtually every category of consumer is spending less on physical products and more on non-physical ones such as digital products, online education, and personal experiences. 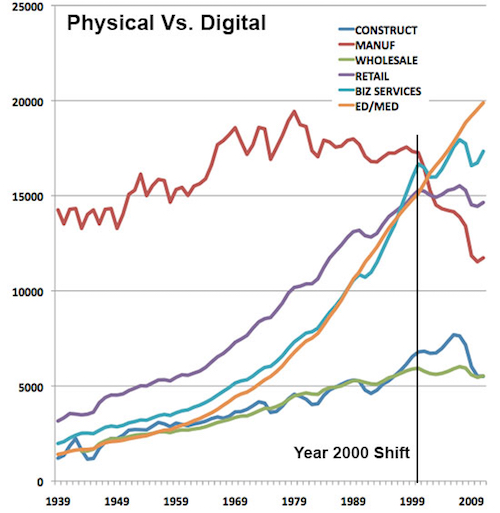 The chart above shows the shift that occurred around 2000 as the emergence of Internet technologies started affecting real world businesses.

Today, it is much more likely that someone will read a digital book instead of its physical counterpart. Similarly people are much more likely to download digital music, photos, movies, or games rather than purchase their tangible equivalent on CDs, paper, or vinyl.

To many, the physical world is the underlying culprit of most of their problems: 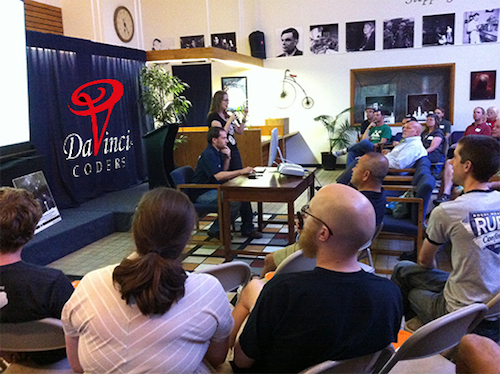 Contrary to what many believe, our new generation of coders are NOT:

We’re entering an era where business and society are being run by something akin to a digital nervous system.

Managing customer relationships, payments, and product fulfillment are part of our next generation digital ecosystem.

According to a recent study by Capgemini, big data is becoming as fundamental to business as land, labor, and capital has been in the past.

“It’s not only through harnessing the many new sources of data that organizations can obtain competitive advantage. It’s the ability to quickly and efficiently analyze that data to optimize processes and decision-making in real time, that adds the greatest value,” says Capgemini Global Sales Director Paul Nannetti. “In this way, genuinely data-driven companies are able to monitor customer behaviors and market conditions with greater certainty, and react with speed and effectiveness to differentiate themselves from their competition.”

As technology evolves, each next-step results in an exponential growth in data volume.

Over the coming decade the vast majority of businesses will be transitioning 100% of their day-to-day operations online. As this happens, the digital nervous system will grow in complexity and capability in ways we can only begin to imagine.

The online world is still a mystery to most people.

As an example, a recent study by Wakefield Research showed 54% of people in the U.S. claim to never use cloud computing, but over 95% actually do. A full 65% bank online, 63% shop online, 58% use social networking sites, 45% have played online games, 29% store photos online, 22% store music or videos online, and 19% use online file-sharing. All of these services are cloud based. Even when people don’t think they’re using the cloud, they really are.

Yes, we do it unconsciously, but we are constantly comparing the online world to the physical world.

Even though we’ve come a long ways, we are only beginning to scratch the surface of what’s possible, and the “digital builders” of today are setting the stage for our global work and living cultures of the future.

The speed of electrons are 1,1160,000 times faster than the speed of a car. But speed is only one factor. We still need places to live, food to eat, and the comfort of living.

The bigger question in my mind is, after we rebuild our world digitally, what comes next?