Democracy Vs. Autocracy: What does the Future Hold?

The war in Ukraine hasn’t concluded as of this writing, and victory for either side has yet to be determined. But regardless of how this tragedy turns out, to the surprise of many people worldwide, the bulk of Russia’s ground-based military was stopped in its tracks.
Who would have thought the people and army of this small democratic-leaning nation could stand in the way of the vaunted army of an authoritarian regime like Russia?

It’s easy to assume that a totalitarian government can accomplish whatever it wants, given the nearly absolute power maintained by its singular leader and surrounding advisors. After all, these leaders have the benefit of:

In contrast, democratic governments are messy and inefficient. Their executive leaders face:

One would wonder how anything of substance ever gets done in a democratic, representative government in the normal course of business.

With the caveat that there are many kinds of democracy (direct, representative, etc.) and variations with regard to autocratic systems, the two approaches lie on opposite ends of a governance spectrum.

In 2020, The Democracy Index, sponsored and compiled by the Economist Intelligence Unit, graded 167 countries based on 60 different indicators, assigning each one a ranking between 1 (strongly authoritarian) and 10 (strongly democratic).

The top five scores went to Norway, Iceland, Sweden, New Zealand, and Finland. Many Western European countries ranked quite high with 8’s and 9’s.
The U.S. had a score of 7.92, ranking 22nd in the world, which placed it in the second-highest tier, labeled as a “Flawed Democracy.” At the other extreme, 57 countries found themselves in the bottom tier, “Authoritarian Regime,” anchored by North Korea, with a score of 1.08. China was 17th from the bottom with a score of 2.27, and Russia was 44th from the bottom scoring 3.31.

One can quibble with the criteria and relative scoring, but the principle is certainly true that there’s a continuum, a democracy scale when it comes to democracy and authoritarianism.

Moving the Needle on the Democracy Scale

It’s human nature to want what you can’t have – that’s true for people in authoritarian countries as well as in democratic countries. It’s just that in the two situations, the goals and dreams are quite different. The collective effort to attain those goals and dreams ultimately propels countries to move along that democracy scale.

The movements stem from citizen exposure to ideas and an empowerment to express those ideas – in all types of countries. As I’ll explain further below, the enhancement of those communication opportunities can have a different and even opposite effect when it comes to moving the needle, depending on whether the country is a 7.92 (U.S.) or a 2.27 (Russia) on the democracy scale.

In autocratic countries, citizens increasingly want more choices in their lives along with access to economic and cultural pleasures. Dictators used to be able to keep this in check with a “What they don’t know, they won’t know they want…” approach. These citizens increasingly want a real say in government policies at all levels and the right to express those viewpoints. And as they strive for better lives and access to governance, they’re moving their countries UP the democracy scale. Greater access to a variety of communication technologies, including social media, is helping to make that happen.

In democratic countries, citizens, for the most part, already have the freedom to make choices regarding lifestyles. They enjoy representative-democratic governments that funnel their views up and into the decision-making system. With those fundamental rights in hand, what do these people want more of these days? They want “Their Side” to win and their policies to prevail. As they strive for this dominance, they’re moving their countries DOWN the democracy scale toward a more autocratic, less tolerant situation. Greater access to a variety of communication technologies, including social media, is helping to make that happen.

The Efficiencies of Autocracies

Human rights, civil liberties, and free and fair election concerns aside, as a futurist, it’s hard not to notice that some of the most significant manifestations of the future are appearing in authoritarian countries like China.

For example, since 2008, China has built roughly 40,000 kilometers of high-speed rail, connecting cities across the country. By 2035, the network will extend to 70,000 kilometers. Not content with that, the country is already preparing to transition to magnetic levitation (maglev) trains.

By comparison, initial high-speed rail bonding for a Los Angeles to San Francisco line was approved by California voters in 2008. We may see 107 miles of that completed by 2030, with neither end touching one of those ultimate terminus cities.

We all know from history that dictators know how to make the trains run on time. And for some people, that’s good enough. But that number is dwindling, as we’ll describe below.

The Achilles Heel(s) of Autocracies

The popular conception that communist/socialist autocracies always lead to squalor and a subsistence standard of life has been disabused somewhat by China. That country’s goal of “common prosperity” – essentially promoting high-performing industries, accompanied by a system to equalize wealth and standing through redistribution and coercion – has generated a decent standard of living for many citizens. But a slightly enlightened autocracy is still an autocracy, and it is destined to be undermined by the same primary natural forces.

The first is poor decision-making. Russia’s recent military fiasco seems to be evidence of insular decision-making by elites striving to maintain their position by not offering unpopular viewpoints. I see the same danger for China when approved videos show 100% of the National People’s Congress members applauding rhythmically when President Xi Jinping approaches the dais to address that body. Absolute power distorts decision-making absolutely and similar videos from North Korea.

The second threat to autocracies is the underlying natural hunger for humans to make the most of their time on earth and be free to pursue their best possible outcome in terms of success and happiness. As David Brooks pointed out recently, “Autocracies restrict freedom for the sake of order.” This leads to a brain drain as talent tends to migrate from authoritarian countries to democratic ones, a dynamic that dooms the former in the long run.
At the same time, the U.S. has demonstrated an overly aggressive assault on crime, asserting criminal justice control over the largest percentage of society in all history. This once again demonstrates that democracies may be better but are far from perfect.

And third, autocracies will ultimately decline because of the increasing presence of open, world-wide communications. Voice of America and others, along with social media, will inevitably pierce whatever bubbles autocratic governments try to maintain to keep their citizens compliant and undistracted. More on this below.

Communication technology is one of the most fundamental influencers in our lives these days. With its power for good and bad, what’s the logical future endgame for governments? Again, where you end up depends on where you start.

Despite autocratic government censorship efforts, citizens of authoritarian countries will find ways to learn the truth about their governments’ actions and how much better their lives could be. Social media will be key, just as it was in the wide dissemination of concerns about the dictatorial abuses of autocratic governments in the Middle East and Northern Africa during the Arab Spring popular revolts in 2011.

In some countries, these social-media-driven uprisings ultimately led to greater democracy. In others, the effort couldn’t be sustained and may have caused even more repression. But in the long run, even these “victorious” autocrats have been put on notice that the ice under their feet is just a little bit thinner. 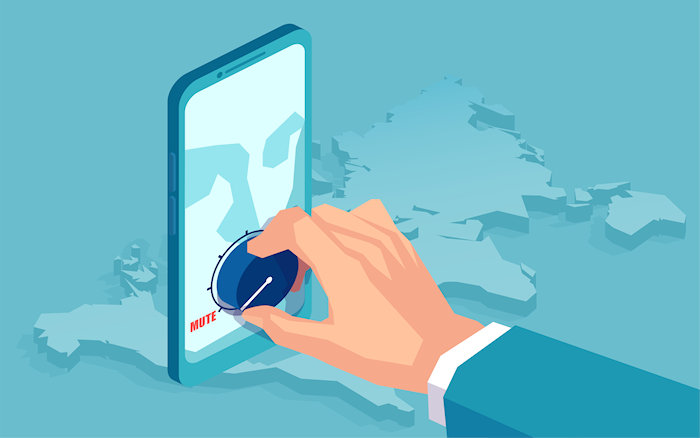 The long-term impact of social media is less clear in democratic countries, where social media is making speech “cheap.” Social media bypasses established institutions that tend to moderate and referee debate. Unmediated opinions don’t need to be based on reasoning, logic, or facts. “Experts” are crowned based on readership and their number of followers, not necessarily their experience or credentials. Facts are in the eye of the beholder.

And when cheap speech undermines the pillars that democracy rests on – for example, open and fair elections, an individual’s rights to pursue wealth and happiness, freedom of expression, and losers’ consent for the winner to govern – a country can drop down a point or two in the democracy scale.

In the short term, too many citizens of democratic countries will continue to tune in only to the social media forums and echo chambers that reinforce and prove Their Side. But as those settings become more and more outrageously divisive, people will begin to tune out – either from boredom or a recognition of the irrationality of the messaging and their tiredness of the situation.

In retrospect, covid was a huge anomaly, forcing us all through a period of intense introspection, and most people were less than ok with their assessment. This resulted in a series of anger-frustration-and-denial moments that may have long-term implications!

It’s still too early to tell if the cacophony of cheap speech noise will cancel out, and people will drift back toward the center, closer to realizing that it’s okay to have divergent opinions.

Democracy in the Metaverse

The metaverse offers the opportunity of creating a democracy as we’ve never seen before. After all, it’s founded on two very democratic institutions – the internet (access to all) and blockchain (transparency and a single source of truth).

In its purest form, democracy calls for consent (i.e., a vote) of the people on every policy and leadership issue. That’s proven unworkable in the physical world and will probably be in the metaverse as well. But metaverse elections regarding major issues and leadership spots will be simple, easy, and unchallengeable.

Yet, it‘s still too early to tell if there will be just one metaverse of 10,000 competing metaverses. And while I hold little hope for any kind of utopia, there may indeed be better ways of resolving conflict, and that alone could be a major accomplishment!