Downloadable Personalities for Your Computer 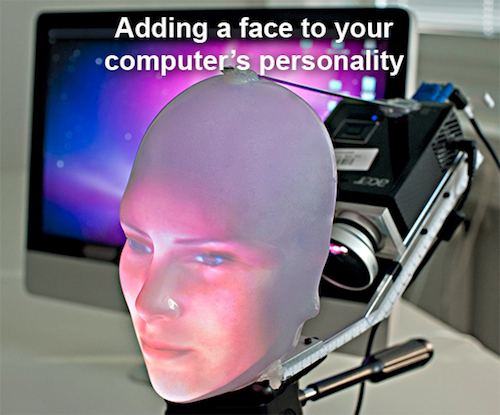 Fifteen years ago in an article I wrote for The Futurist Magazine, I made the prediction that once we had talking computers, we would soon have downloadable personalities to create a more human-like experience. I went on to suggest that most of us would actually download multiple personalities so we could interact with the right persona at any given moment.

Machine-like voices tend to grate on us after while, and the notion that the heartless pile of equipment we currently spend our days with could somehow be magically transformed into a warm and engaging human-like organism is rather alluring. Many of us would like to see that happen.

However, an interactive voice is only a small part of the “personality” equation.

As we’ve seen from some of the early entrants in this space, most notable the smartphone duo of Siri and Robin, current technology leaves much to be desired. A few inquiries into a test run and you’ll find that most responses totally miss-the-mark.

Most GPS systems allow users to change the voice of their commands. But like Siri and Robin, these are one-dimensional voice-only manifestations of a personality, lacking the emotional queues, non-verbal expressions, and the intellectual prowess to answer anything more than a common factoid.

Human-like personalities are hard to define, and since we don’t have any good examples of them, no one has any sense as to the needs or desires of a personality marketplace.

For this reason I’d like to take you on a journey into the unchartered territory of downloadable personalities.

The art and science behind replicating human personalities has evolved dramatically over time. Here are a few of the key innovators driving the “science of personality” forward.

In 1937, the Walt Disney Studios released its first fully animated feature film, Snow White and the Seven Dwarfs, and pioneered animation as a new form of entertainment.

Yes, there were artists depicting figures in motion as early as the Paleolithic cave paintings thousands of years ago, and some of Leonardo da Vinci sketches in 1510 showed sequential motion in the human body.

Many different devices paved the way for animation in the motion picture industry, including the magic lantern in 1650, the Thaumatrope in 1824, the Phenakistoscope in 1831, the Zoetrope in 1834, and the flip book in 1868. One of the first motion picture animations was a short called “The Humpty Dumpty Circus” by Albert E. Smith and J. Stuart Blackton in 1908.

Even though there were eight animated films that came earlier, it was Disney’s Snow White in 1937 that pushed the bar for animation dramatically higher with amazing attention to detail and characters that exuded their own personality.

One children’s toy that was way ahead of its time was Teddy Ruxpin, an animatronic talking teddy bear produced in 1985 by Worlds of Wonder.

The bear moved his mouth and eyes while ‘reading’ stories which were played on a cassette tape player built into his back. The design team included Ken Forsse, Larry Larsen, and John Davies. Later versions used a digital cartridge in place of the cassette. At his peak, Teddy Ruxpin was the best-selling toy in both 1985 and 1986.

In 1955, fledgling puppeteer Jim Henson launched the Muppets, a puppet-based TV show that would soon become world famous. At the heart of his emerging puppeteering empire was his fixation on character personalities.

Believing that television puppets needed to have “life and sensitivity,” Henson began making characters from flexible, fabric-covered foam rubber, allowing them to express a wider array of emotions at a time when many puppets were made of carved wood.

When it comes to imagining what king of personality would best fit a robot, we see quite an evolution over the years:

Even though I’ve only mentions a few of the thousands of robots in TV, movies, radio, and literature, you can sense the radically different approaches used to instill a personality into these machines. 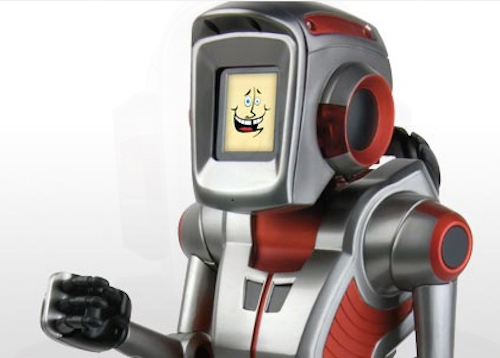 WowWee is Hong Kong-based company launched by Richard and Peter Yanofsky that focuses on “breakthrough consumer technologies.” They are best known for their biomorphic robot RoboSapien.

In 2009, they released a homebrew editing software that allowed users to edit the personality files on their Mr. Personality Robots™.

With its programmable modules, Mr. Personality™ redefined the term “personal” robot because users could architect whatever personality they desired. Designed as a fully animated and interactive talking companion, it exudes personality in everything it says and does. Like a cartoon character morphed into 3D, he can tell jokes, read your daily fortune, and even answer questions about your future.

One of Google’s executives recently mentioned that a full 20% of all searches, each day, have never been done before. This means that the human-to-computer interface is evolving at a staggering rate. For this reason, downloadable personalities, although still on the drawing board, will transition in a similar fashion.

Once created, artificial personalities will begin down a path of constant evolution. As a starting point, they will be constructed around a series of “personality modules” such as:

With the right framework it will be quite easy to launch a new personality and many celebrities will want to get into the act.

As an example, creating a David Letterman personality will begin with downloading a few hours of his recorded voice and the computer will learn to speak like him. His “top 10” lists and jokes from his monolog will be added on a daily basis, along with famous quotes, words of wisdom, and advice.

Using a series of images it will be easy to create a David Letterman avatar to serve as the persona projected onto a facial display like the one shown above. Over time people will ask a number of questions that he can spend time answering, or have someone on his staff respond to.

Much like a living organism, each personality will be developed around a growing body of content that transforms with each additional module.

Critically important to this technology will be the revenue models and your willingness to spend money on a celebrity personality like David Letterman for your computer? 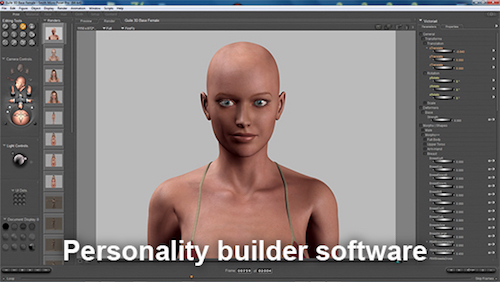 Become your own personality architect

Next Generation Opportunities for Downloadable Personalities

Adding a personality or two to a computer or robot is only one possibilities. What if you could download personalities onto your refrigerator, your car, your bathroom mirror, or the front door of your house?

People love to talk to their plants, so what if the plants could talk back? Every flowerpot and plant-holder could exude the personality of the plant. Add a few sensors and the plant could tell you exactly when it needs attention.

A few years ago I created a future scenario about a product I called “Arguing Shoes”:

“Our research has shown that most children today think of their feet as an extension of their own personality, and a source of entertainment. For this reason we have created the world’s first talking shoes. But after extensive testing we found that just talking to their feet didn’t exactly excite kids. So we spent time designing shoes that not only talk, and carry on a conversation with each other, but also argue with each other. For whatever reason, kids just love watching shoes that are constantly arguing and bickering with each other.

To make it even more interesting, our shoes not only argue with each other, we’ve designed them to pick a fight with any other shoes within earshot. This will create hilarious situations in shopping malls, movie theaters and schools, entertaining children everywhere!”

Is this a realistic possibility?

Thinking through the options, I would want to download a Conan O’Brien personality to have fun with, Ben Franklin to give me advice, and Morgan Freeman to explain things to me.

Taking it a few steps further, I would want Walter Cronkite to tell me the news, Bill Cosby to help put things into perspective, and Mother Teresa to keep me humble.

If we designed robots to take care of babies, they should have the voice and personality of the mother, automated pet walkers should come with the personality of their owner, and as Sugata Mitra has suggested, students struggling in school are most encouraged by hearing the voice of a grandmother.

The world of downloadable personalities is still waiting to be launched, but in my way of thinking, it won’t take long to completely explode.

Let me close with a few questions:

I’d love to hear your thoughts on this. As for me, I can’t wait.