Monitoring People from Space: The Good the Bad, and the Ugly 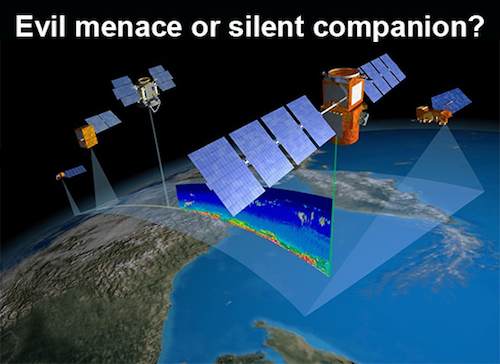 In the late 1980s, I was an engineer working as part of an IBM team to build a mobile satellite command and control center for monitoring missile launches from space. This contract was part of Regan’s “Star Wars” missile defense system.

Whenever a missile is launched, the heat plume coming out of the back of the rocket produces a distinct heat signature instantly detectable by satellites with infrared sensors.

The technology we were using over 25 years ago could instantly distinguish between types of rockets, calculate trajectory, and give information on time of impact.

Since those early years of working with infrared sensors I’ve often wondered if it would be possible to monitor people from space by tracking their personal heat signatures.

Two overarching trends that get little attention today are those of rapidly increasing precision and awareness. As both travel up the exponential growth curves of the emerging big data industry, what inevitably becomes possible is an ability to distinguish a person’s identity from a distance, even space.

On the surface this may be a frightening prospect. Having someone know where I am at any moment of the day, does indeed make the hair stand up on the back of my neck.

But at the same time, there is an undeniable convenience factor. If a person is suffering a heart attack or stroke, being kidnapped, or otherwise in a condition of extreme stress, a monitoring system that can shave minutes off emergency response times can mean the difference between life and death.

As with many of today’s emerging technologies we have to sort the good from the bad. Here are a few thoughts on what may happen in the future.

The History of Biometrics

Biometrics is a term that refers to the identification of humans by a certain physical characteristic or trait. It’s often used with computer systems to validate a person’s identity.

Over the decades a number of other biometric systems have been developed around everything from voice recognition, to DNA, to keystroke and hand print behavior. 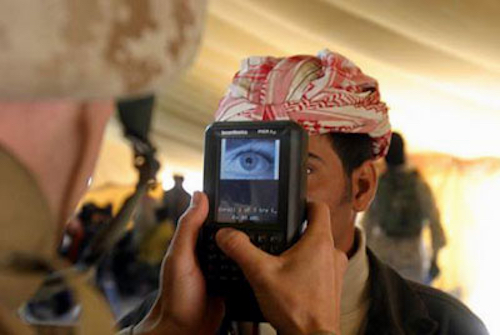 The 2002 film Minority Report brought attention to Iris/Retina scanning technologies for both personal identification and point of sale transactions. The main character changes his identity by having his eyes transplanted, and later accesses a security system using one of the removed eyes.

Recently, Renato Zenobi, a researcher at the Swiss Federal Institute of Technology in Zurich, discovered a new area of science – breathprinting. By using a mass spectrometer to analyze the breath of 11 individuals, 4 times a day over nine days, he was able to identify the unique molecules in each breath sample and determine both the health characteristics and the identity of the individual.

As the field of biometrics advances, we will see a number of personal identification systems that can be observed from a distance, both by drones and satellites.

Can an infrared signature of a human body be person-specific?

The answer to this question is still an unequivocal “maybe.”

Infrared radiation is made up of photons with wavelengths that vary from a little less than 1 micron to about 1 millimeter. Since everything from animals, to trees, to cars, and highways all emit photons, the first challenge will be to separate human heat signatures from everything else.

It will be tricky to separate direct emissions from reflections. If, as example, you were sitting on a seat for a long period and then walked away, the seat would retain a similar heat signature for a short period of time.

Even if we can account for all of those issues, we still don’t know if that infrared signature is 100% unique to that individual. Complicating things further, the clothing we wear, the food we eat, and our current level of activity all have a bearing on our ability to discriminate one person from the next.

Even with a high res system, variables like the person’s state of health, their metabolic and emotional state as well as their physiologic response to external conditions (extreme cold, for example) will cause variations in thermal signatures.

For these reasons, it’s unlikely that an infrared-only heat signature will be sufficient for identification. However, tying infrared sensors to other biometric monitors is something that will happen sooner or later.

Peeling Away the Onion Layers

As we add layers of precision and awareness to the equation, we begin to see increasingly intrusive capabilities begin to form. Here is a progressive list, going from crude observations to nano-detailed observations, of how this type of technology will evolve over time:

Now imagine these monitoring capabilities first from 100 feet, later from a mile away, and eventually from a geosynchronous satellite orbiting the earth.

Even with a strong pushback from privacy advocates, niche uses will find their way into everyday use. Some of the first business models will form around creating early warning systems for people in peril. Here are a few use cases that will be used to advance the technology.

Naturally images of big brother hovering over us come to mind with any technology like this. But big brother isn’t the only one that’ll cause problems. Here are a few possible ways things will go bad.

Many of our latest technologies, designed with all the best intentions, go woefully off track in the hands of the wrong people. 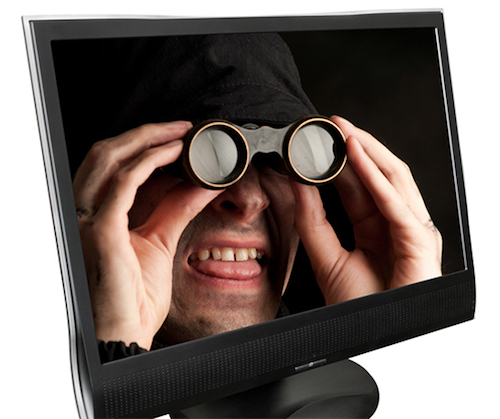 Growing up as young people we are constantly testing our limits. We are testing the limits of how much we can eat or drink, how little sleep we can get away with, how fast we can run, and even how many people we can date simultaneously.

Without testing our limits, we can’t possibly know who we are.

We are all terminally human, and our learning styles and thought processes vary tremendously from one person to another. As such, we need enough runway to fall on our face a few times before we understand our limits.

Limit-testing is our way of learning how to behave in the future, and extreme transparency has a way of making “different” wrong.

Transparency has an insidious way of encroaching on our space and exposing our foibles to the rest of the world.

The technology I’ve described above will eventually happen with or without our blessing. Today’s cellphone tracking systems have already started us down this path. The overarching trend is already well underway.

Is this a technology that will eventually destroy the world as we know it today, or will it lead us down a path to something better?