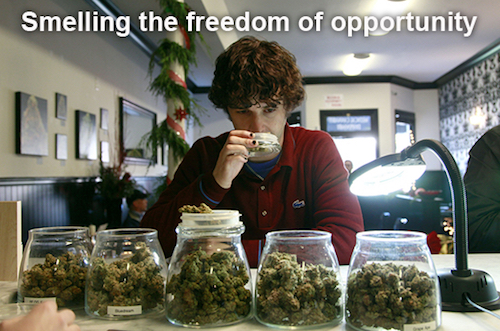 It may sound silly to walk into a bar and order up a beer with a weed chaser or to open a late night box of cereal called “Weedies” to help you sleep, but that is exactly the era we’re moving into.

On Election Day, the citizens of both Colorado and Washington made the bold decision to legalize marijuana and manage it with controls similar to alcohol, prompting speculation about Amsterdam-style “drug tourism” and a new round of jokes about Colorado’s official song, Rocky Mountain High.

Using the two ballot issues as templates, the remaining 48 states will see similar versions of this legalization on their ballots in the coming years.

But for now, Colorado and Washington will be the ones making all of the critical decisions about the massive new industries that are about to unfold.

While the role of being first brings with it some painful policy-making work, it will also attract tremendous attention, and the entrepreneurs in these states are already racking their brains to figure out how to capitalize on it. Here are a few things to expect. 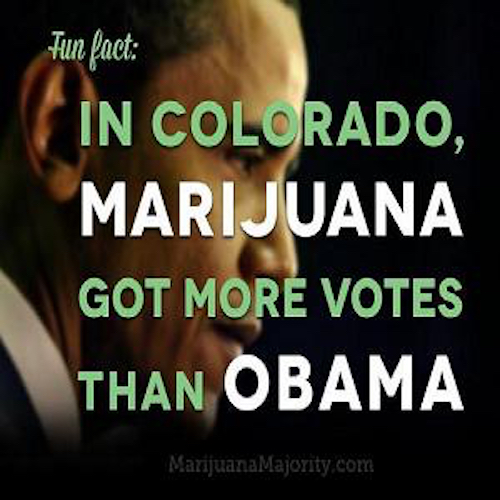 In 2009 I predicted: “Within ten years marijuana will emerge as a staple at most night clubs and parties.”

After looking closely at the similarities between now and 1933 when prohibition ended, it was an easy prediction to make.

Attitudes about pot laws had been shifting and a 2009 Gallup poll showed 44% of the population supported legalizing marijuana, up from 25% in 1995. A more recent poll in 2011 showed it had risen to 50%.

Since the 1937 Marijuana Tax Act that prohibited the production of both cannabis (marijuana) and hemp, a rigorous effort has been made to vilify the two substances. The reasons behind hemp’s inclusion seem to have centered around a conspiracy orchestrated by the combined efforts of Andrew Mellon, Randolph Hearst, and the Du Pont family.

With the invention of the celluloid-extracting decorticator, hemp was thought to be a very cheap substitute for the paper pulp used in the newspaper industry. Hearst felt that this was a threat to his extensive timber holdings. Mellon, who was then Secretary of the Treasury and the wealthiest man in America, had invested heavily in the DuPont’s new synthetic fiber, nylon, and was worried that new hemp fiber derivatives could derail nylon’s popularity.

Scare tactics about pot’s addictive nature and its “gateway drug” potential have long been debunked, but those who oppose legalization still cite these issues as major concerns.

In the Netherlands, where pot is widely available in coffee shops and smoke shops throughout its cities, the Dutch are far less likely than Americans or other Europeans to use marijuana. Roughly 14% of Americans already use marijuana, versus about 5% of the Dutch, according to the United Nations Office on Drugs and Crime. 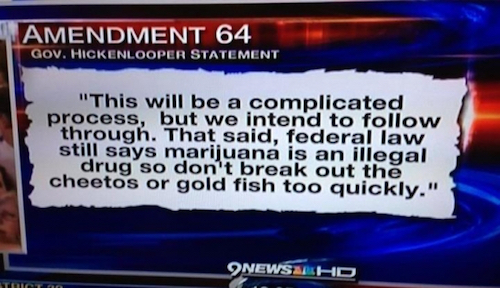 The Colorado and Washington initiatives have put the Justice Department in an awkward position. The two states have asserted their rights to make it legal, but this legality is in direct conflict with federal law.

These votes have set the stage for a massive showdown between State’s rights and Federal authority. So far the Federal Government hasn’t been willing to budge.

From October 2011 to October 2012, federal law enforcement has shut down 600 medical marijuana dispensaries in California. It was the biggest crackdown since the state legalized medical marijuana in 1996. Prosecutors also tried to seize the assets of sellers and their landlords and threatened them with criminal charges.

This is not a case where we can assume the federal government will follow the lead of the states. Rather, it’s a case where the Justice Department is asserting its authority against the state’s voters and state sovereignty.

Colorado already has 536 medical marijuana dispensaries operating throughout the state and Washington has a similar number. The new legalization vote could trigger 100 times as many outlets.

This will indeed be a thorny issue for the Obama administration, and it may very well end up in the Supreme Court to get a final ruling. And if the Supreme Court doesn’t agree with Colorado and Washington, expect a much larger movement involving protests and civil unrest to ensue. 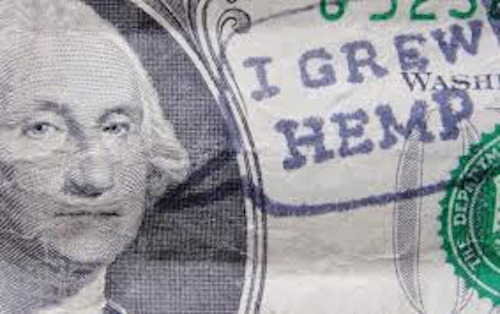 Entrepreneurs tend to be very optimistic and many are already working the angles to uncover new business opportunities with the presumption that the Fed’s will okay it. Once the showdown dust settles, the new legalization era will officially begin.

We already know about the number of businesses launched and jobs created through the 17 states that have legalized medical marijuana. If we assume an exponentially larger industry to emerge from outright legalization, the number of jobs created could easily be over a million.

Ironically, a huge percentage of the new jobs won’t involve the consumption of pot, but will instead involve peripheral industries.

Here is a sampling of some of the new industries this will spawn:

As Napa valley is to the wine industry, Colorado and Washington will be to the emerging Marijuana industries.

The biggest early-stage opportunities will involve inventing the industry itself. Elected officials and policymakers are usually pretty inept at visualizing all the possibilities ahead, so those who can help them think through the possibilities will be in huge demand. The early stage people who shape this industry will also help define the kinds of opportunities that it creates.

We are entering unchartered territory and the Obama administration will be heavily scrutinized for virtually every decision they make. In the end, marijuana will become legalized, and this movement will them transform into a movement to reinvent the justice system.

America now imprisons more of its own citizens than any other nation on Earth. The first step will be to release all of the prisoners convicted of marijuana possession. The next step will be far more dramatic, to reform the heart and soul of American-style justice and rein in the system that has grown wildly out of control.

Most people thought the election was about selecting our next President. While that selection will affect people for the next four year, the legalization of marijuana will affect the future of world from here on out.