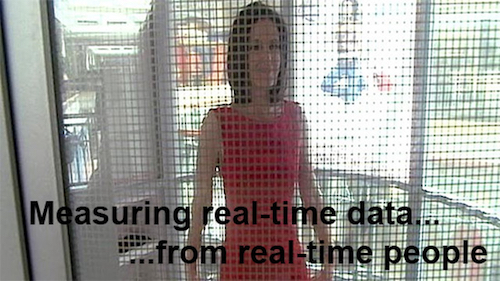 In the 1980s, as a young human factors engineer at IBM, I spent much of my time working with anthropometric tables, a compilation of statistical data about the human body used for designing a product’s ergonomic interface.

At the time, much of the data for these tables was compiled by the U.S. Military through a series of 40 separate anthropometric surveys of military personnel between 1945 and 1988. The research involved 240 distinct measurements of the body such as weight, height, arm length, distance between eyes, circumference of fingers and toes, and much more.

Once compiled, these tables became a key reference tool for engineers and designers involved in creating customer-facing products ranging from workstations, to cars, to chairs, to beds, to shoes, and virtually every other product that people physically interact with.

Coming from the government, the data was freely available for anyone to use.

In the future, body scanners will become commonplace in retail stores around the world, as customers gravitate to custom tailored and custom printed clothing, and the volume of data involving the size and shape of human bodies will grow exponentially. Research studies that once involved 240 distinct measurements will transition into real-time data involving millions of possible dimensions.

However, even after the customer’s name is separated from the data, a lingering question remains, “Will this data be freely available for the world to use?”

What I have described above is one tiny example of the challenges ahead for the Open Data Movement.

Open data is the idea that certain data should be freely available to everyone to use and republish as they wish, without restrictions from copyright, patents or other mechanisms of control. The goals of the open data movement are similar to those of other “Open” movements such as open source, open content, and open access.

The philosophy behind open data has been long established but the term “open data” itself is relatively new, gaining popularity with the rise of the Internet and especially, with the launch of open-data government initiatives such as Data.gov.

It could easily be argued that a retail clothing chain with 10,000 stores could charge millions of dollars for the raw data they accumulate from doing countless customer body scans. After all, this is a private business struggling to make a profit selling clothing, so why should they be coerced into giving this information away for free?

At the same time, the data about individual people actually belongs to those people, so it doesn’t seem fair that a private company should profit from their data.

Another possible source of this data may be the scanners used by TSA at the airport. These scanners could be programmed to perform a similar task. In this case, as a government agency, the data would likely be free.

In the past, research studies were conducted to get a “snapshot in time” of data. This research data may have involved traffic patterns, weather statistics, buying habits, customer preferences, energy usage, time of day issues, or literally millions of other topics.

Over the coming years, nearly all of this kind of data will become collectable through some real-time mechanism.

Driverless cars will leave countless digital trails in their wake monitoring everything from road conditions, to vehicle occupancy, to traffic patterns, to load time details, and more.

Digital lighting systems that allow customers to automatically change color, brightness, and intensity will automatically be collecting a range of data on personal preferences based on time of day, time of year, geographic location, weather conditions and a host of other ancillary issues.

Pillcams, those tiny digestible cameras used to scam a person’s digestive tract, can be programmed to measure human dimensions from the inside out.

So where does open data end and private data begin? We currently don’t have the answer for this question.

The “Internet of Things” as Infrastructure

In what’s called the Internet of Things, sensors and actuators are being embedded in physical objects ranging from roadways to pacemakers. Our rapidly growing universe of “Things” is being linked through wired and wireless networks to the Internet. Altogether, these networks are churning out huge volumes of data that flow to computers for analysis. When objects can both sense the environment and communicate, they become tools for understanding complexity and responding to it swiftly.

As an example, precision farming equipment with wireless links to data collected from remote satellites and ground sensors can take into account crop conditions and adjust the way each individual part of a field is being farmed. In some cases this means planting seeds at different depths, spreading extra fertilizer on areas that need more nutrients, or adding more water as soil conditions change.

Billboards in Japan look back at cars as they pass, determining whether passengers fit certain customer profiles, instantly changing displayed messages based on those assessments.

Yesterday’s predictable pathways of information are changing and the physical world itself is becoming a new type of intelligent system. The resulting information networks are emerging as a new form of infrastructure capable of spawning new business models, improved business processes, and even entire new industries. 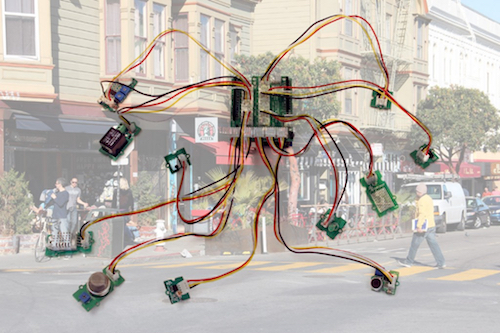 How much data would be collected if there were sensors on almost every street corner?

No, I don’t think we’ll see physical infrastructure going away anytime soon. But what we will see is a combining and expanding of the physical with the digital. By creating tiers of usable information, companies can add layers of efficiency and enhance productivity, giving them a far-reaching competitive edge.

Countries that provide the best digital infrastructures will have a huge advantage over those showing lesser efforts.

As an example, if a country installed digital sensors throughout every square mile of its land, adding things like geological indicators, air monitors, radiation detectors, environmental gauges, temperature and barometric pressure meters, the resulting trove of usable information would be incredible.

However, ramping up the density from one per square mile to one per square meter will yield 2.6 million times as much data from the land. The sheer quality and precision of the resulting information will dramatically improve both the caliber and scope of startup ventures.

But the question remains. How much of this will be open data, free and readily available for anyone who wishes to use it, versus data that is private, protected, and expensive?

From my perspective, every paywall inserted in the middle will create a “negative Metcalf’s Law effect” causing the cumulative value of the resulting open data universe to drop exponentially.

So do the pros outweigh the cons in our future data wars? It’s not likely going to be an either-or question, but one of dividing lines. I’ve already mentioned some of my thoughts on this topic, but carving out those territorial delimiters as to where private data stops and open data begins will be a policy decision that is not going to be easy to make.