Introducing the One-Person Business Empire: An Option Most VCs want you to Overlook 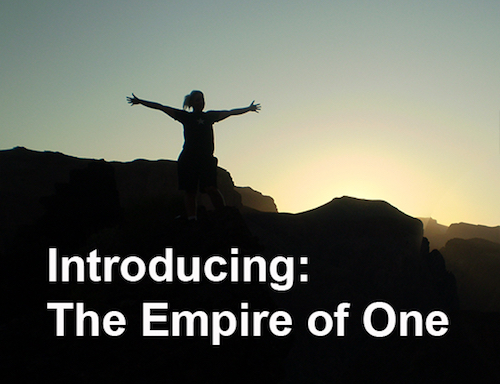 What are the odd of you ending up age 65-70 and having regretted your entire life? As people edge towards retirement, reflective moments like this can be a gut wrenching experience. If you’re like most, the odds are well over 90%.

For many, the jobs world has transitioned from a lifelong career path to frenetic stints of work with amping levels of stress at the beginning and end of each new gig. Many are desperate to gain some control over their own destiny, but few know how.

Launching a new business can be a terrifying experience, especially if you go down the old school path taught in most entrepreneurial schools. The process of writing a business plan, raising money, and hiring a leadership team has killed far more businesses than it helped. Death by 10,000 distractions.

People launching a business have limited resources – limited time, energy, money, talent, and intellectual bandwidth. Chasing after meaningless accomplishments simply because a so-called “expert” told you to do it is a sure path to failure.

The new Empire of One business model we’re developing at the DaVinci Institute starts by building the mindset of an entrepreneur, before overloading people with extraneous options. As an example, the one-person entrepreneur doesn’t need to know about raising money, SEC rules, investor relationship strategies, HR requirements, hiring policies, or any of ten thousand other details designed for explosive growth businesses that only represent a fraction of one percent of the ones that succeed.

Once people learn to be successful as a one-person entrepreneur, without putting their family, house, and lifetime savings on the line, they can consider larger endeavors. Let me explain further.

Empire of One Defined

An Empire of One is a one-person business with far reaching spheres of influence. Since its oriented around the lifestyle, needs, and desires of you, the person in charge, it can be as big or as small as you want it to be.

Running a solo business in the past most often meant that you had a one-person practice, offering a professional service such as a lawyer, accountant, dentist, or doctor.

Even though these are still viable options, the Internet, 3D printing, online storefronts, and other emerging technologies are opening up far more possibilities. Our approach will be to focus on this burgeoning category of “other possibilities.”

The business you create can be formed around a product, a service, or a combination of both. It can be a for-profit, non-profit, domestic-only, international, have broad appeal, or only be for be for left-handed people in Armenia.

Best of all, you can keep your current job, keep your savings, and keep your family intact. You decide the level of risk you’re comfortable with. After all the decision-maker in any Empire of One is you.

That said, learning everything you need to know will involve a steep learning curve and it won’t come without hard work, trial and error, and several introspective moment where you feel like you’re beating your head against the wall.

In addition, there’s no such thing as a totally risk-free venture. It will require a time commitment, a money commitment, and an emotional commitment.

Since we live in a world oriented around financial drivers, our worth as an individual is often tied to the salaries we earn. However, most people grossly underestimate their true earning potential.

We believe this new way of thinking is best taught in a small synergistic group setting formed around passionate, driven people wanting to take control of their own destiny. Here’s what we have planned:

Since this is a pilot program, all classes will be held in-house at the DaVinci Institute. There will be no webcast options for the first one.

Classes will be primarily taught by Dave Taylor, but an entire faculty of guest speakers, experts, and advisors will be involved to make this a truly remarkable experience.

In addition to normal class times we will be adding special one-on-one “ask an expert” sessions that will enable people to ask detailed questions about their specific situation.

The Empire of One Philosophy

Businesses are living, breathing organisms, operating in fluid environments, constantly adjusting to every shift and change in the world around them. Money serves as its breathable oxygen.

And in much the same way nature feeds off the less fortunate, big animals eating smaller ones, all businesses are competing for the same revenue streams using superior acumen, prowess, and resources to feed off of the revenue streams of the little guys.

According to Chris Anderson, Author of The Long Tail, “Increasingly, the mass market is turning into a mass of niches.” And “all those niches, when aggregated, can make up a significant market.”

In today’s business world there is competition for every dollar spent, but in the end, consumer make the final decision. The beauty of the consumer marketplace is that all consumers are wonderfully erratic, creating literally trillions of variables that they use to make their decisions.

So even though major brands work overtime to infiltrate the minds of every consumer on the planet, there are still tons of tiny markets left untouched. That’s where the Empire of One comes in. The massive world of untouched opportunities is already huge, and growing bigger every day.

There are many misconceptions about starting businesses and the life of an entrepreneur, but I’ll mention just three important ones here:

So it’s in our best interest to create more epiphanies.

However, successful businesses are never created with just one big idea. Rather they require tens of thousands of small ideas clustered together with enough momentum to drive the original epiphany forward.

Second, learning how to succeed also requires learning how to fail. In a best case scenario, failures can be minimized, deflected, or cauterized before they cause too much bleeding to occur, but there will always be another failure waiting for you to contend with.

As an entrepreneur, your ability to deal with failure will define who you are and how successful you will ultimately become. Very often failures can be leveraged, turned around, and used to your advantage, but that can only happen once you become comfortable with failure.

Every successful business requires that you make an “all in” commitment. During the early stages you will eat, sleep, and breathe the business. It becomes part of you.

In the online world, people can be particularly rude and abrasive.

The emotional side of business requires a thick skin. Your ability to manage your emotions and formulate a reasonable response is not an easy skill to learn. Those who are the best at it typically have a mentor network of like-minded entrepreneurs they can call at a moments notice.

As you enter the rollercoaster life of an entrepreneur will experience “higher highs” and “lower lows” than you ever thought possible. But in the end, you’ll feel like you’re truly living.

The Empire of One is a phrase I first coined in early 2008 after seeing the rise online tools and an emerging form of entrepreneurship taking place.

Now, after several years of watching this trend evolve, we’ve decided to take it to the next level and develop a formal training experience around it.

Here are the six primary tenants around which the course has been formed:

An Empire of One business puts you squarely in the captain’s seat of your own starship. We will help you set the stage, chose a starting point, surround you with experts, and build your own communities.

Most importantly, we plan to make it fun. But in the end, this is a journey that you’re in charge of.

Is this something you’d like to be part of? Since we are always looking for ways to do things better, Please let us know your thoughts.

Note:  We will be hosting an introductory event titled “Employee to Entrepreneur :: Shifting Your Mindset to Control Your Own Destiny” on Feb 25, 2013. It’s free, so please plan to join us to find out more.

← Micro Credits: A Tool for Self-Organizing the Complex World of Education Our Alarming Culture of Pill People and Future Trends in Healthcare →