Rethinking Retail and 18 Examples of Change 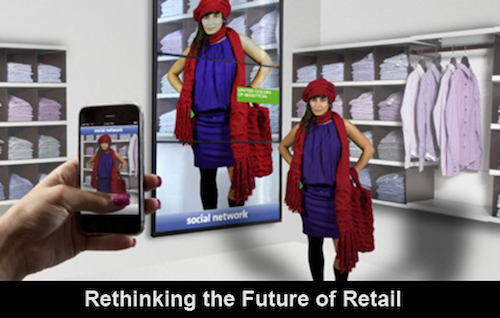 The next time you try on a piece of jewelry, pay very close attention to the emotional experiences that run through your mind as you touch and feel the jewelry.

Even though clothing and jewelry are inanimate objects, they are closely tied to an emotional response, and brand managers today are working overtime to figure out ways to both cultivate and amplify that emotional connection.

One fascinating example of this is Gomus, a Brazil-based music branding company that embeds RFID tags in clothing. When a customer tries on a piece of clothing in the changing room, music will automatically come on that matches the feel or mood of the clothing.

This is just one example of how retail stores of the future are attempting to differentiate themselves from the online world. Here are 18 more examples of how future retail is on the verge of becoming an exciting new frontier for both product designers and consumers alike.

A famous 1998 article in Wired Magazine written by Nicholas Negroponte predicted with great accuracy the demise of traditional retail. What he was not able to predict is all of the nuances of how the online world and technology would be integrated and blend together to form unusual experiences that will become part and parcel to virtually every new retail store in the future.

When looking at how retail is evolving, there are several factors that must be considered. Here are a few data points to consider as we dive deeper into this topic.

Understanding the current trends is only part of the equation. As we dive into some of the possibilities we begin to see a radically different picture emerge.

Here are 18 examples of companies that are pushing the boundaries of imagination when it comes to future retail.

1. SingTel, a Singapore-based mobile phone service launched their ﬂagship store in Singapore’s Comcentre in July 2011. The store’s exterior glass walls have embedded interactive digital touchscreens in them, meaning that the store will effectively be open 24 hours a day.

2. Homeplus, Korea’s largest discount chain has announced the opening of the world’s first virtual store for smartphone users. They launched a series of virtual stores on subway platforms, enabling customers to make purchases using their smartphones while they wait for a train. During the trial period, Homeplus’ online sales increased by 130%, with over 10,000 new customers trying the stores.

3. In March 2011, Walmart launched “Pick Up Today,” a service that allows customers to order online and collect their shopping from a local store the same day. This new service offers same-day pick up of online purchases, for free. Walmart began testing the program at 750 stores in 20 markets late last year and will roll it out nationally to all locations by the end of March. 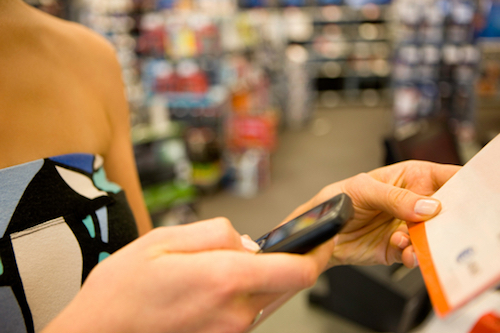 4. Both Groupon and Living Social are testing in-store deals that are delivered directly to a person’s smartphone as soon as they enter a store. Eventually this service will become aisle-specific, delivering deals that are only within a few feet of the customer.

5. Soon to be the newest grocery store in Austin, Texas, the town where Whole Foods was born, will be the country’s first zero-waste, package-free grocery store, cleverly named In.gredients. Shoppers at the store will bring their own reusable containers to ﬁll with local and organic groceries ranging from dry bulk and dairy, to wine and household cleaners.

6. Taking fresh produce one step further, the visionary thinkers at PlantLab, a Dutch leader in the urban agricultural movement is exploring new ways to grow produce in sunless, rain-less rooms in underground vaults beneath grocery stores.

7. ThinFilm Electronics is working with Xerox PARC to develop smart tags in the form of printable plastic labels that will actively monitor food freshness. The multilayer tags will combine a year’s worth of battery power, sensors and a small display, and will initially be used to show a temperature record of perishable food and medications. In the future smart tags will be used to trace the lifecycle of a product including point of origin, distance traveled, age, environmental changes, and any degradation of the product’s integrity that may have occurred along the way.

8. In August 2011, the New York Times reported on an increase in the popularity of digital, paperless receipts, touting it as a convenient, environmentally friendly alternative to paper receipts. Gone are the days of digging through your purse looking for that crumpled slip of paper. Retailers in the US include Apple, Whole Foods Market, Gap, Sears, and Kmart offer shoppers the option of choosing to receive proof of purchase by email or via password-protected websites.

9. In May 2011, a Santa Monica-based bookstore called Books and Cookies was launched as an educational experience to provide children with literature and tasty treats. The store stocks children’s books – available to purchase or read in the child-friendly reading room area – toys, and freshly baked cookies and snacks. The brainchild of Chudney Ross, youngest daughter of singer Diana Ross, the store offers great books and toys for toddlers and tweens, daily events, healthy snacks and drop-dead delicious cookies just a few blocks from the area’s famous California shoreline.

10. Cook and Coffee is a retail space in Paris that combines classes and demonstrations with their in-store experience. Run by Italian electronic appliance manufacturer De’Longhi, customers can learn the history of coffee from a specialist barista, sample various blends and try out kitchen appliances including espresso makers and food processors. The space is equipped with interactive screens and from September 2010 onwards, consumers have been able to attend no cost cooking workshops, such as how to make custard or pasta.

2theloo – A clean restroom and a new kind of shopping experience

11. 2theloo (to the loo) is a chain of Dutch restrooms. Each visit to the restroom costs 0.50 euros ($0.68). It seems, that in Europe, restrooms are not considered a public service and you have to pay for them pretty much everywhere.

However, the chain of ‘always clean’ restroom shops, located in city centers, shopping centers, and train and gas stations, not only offer eco-friendly toilets, including disabled access restrooms and family restrooms, but also shops with toiletry products and sometimes even a coffee shop.

12. Everyone knows that the hottest businesses are the ones that are impossible to find. Bodega is a Boston shoe store which people truly wouldn’t be able to find despite their best efforts because it’s hidden under the guise of a convenience store. Shoppers need to enter, and find the Snapple vending machine on one of the walls, and then they have the ability to enter via a trap door and go underground and shop at the exclusive shoe boutique decked in polished hardwood.

13. MyBestFit is a free service available in a number of U.S. malls. Customers enter a circular whole-body scanner that uses low-power radio waves to record over 200,000 body measurements. It then matches the customer’s body type to clothes in its database, such as products from mall staples American Eagle, Old Navy, Eddie Bauer and Talbots. A printout advises customers what and where to buy the clothes that will best match their body. 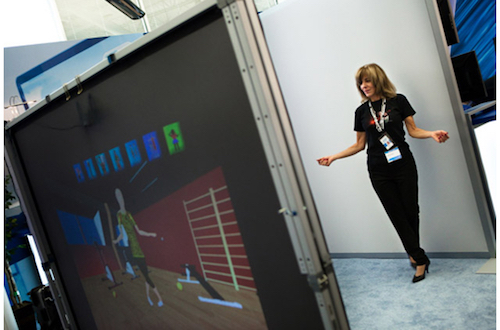 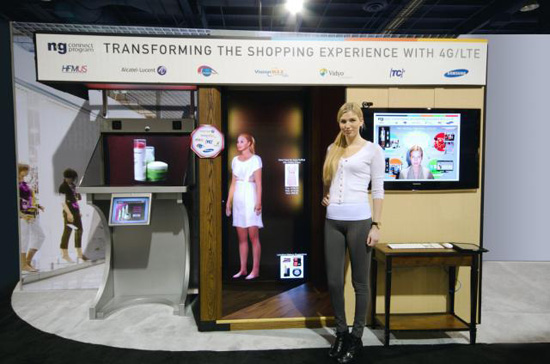 15.) At CES, ng Connect demonstrated its Virtual Personal Stylist, a shopping experience that will bring the personalization and customization of offline and online shopping together. Using a tablet or mobile phone, shoppers in stores will be able to access their avatar via a full-size networked “mirror” where they can “try-on” clothing, make-up and more without time-consuming trips to the changing room.

3D Printing and the Clothing in Our Future

It is important to note that the garment/fashion industry is one of the few remaining industries where mass produced items are still assembled almost entirely by hand. This means that although design may happen in the first world, production is often outsourced to the third world where labor is cheap.

While some of you may not be thrilled with the possibility of wearing plastic garments, 3D printers in the future will have the ability to print cotton, polyester, wool, or any number of other traditional and non-traditional materials. Here are a few examples. 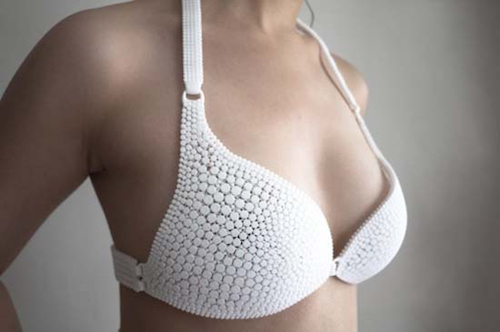 17.) The result of a collaboration between Continuum Fashion and the 3D printing experts at Shapeways, the N12 Bra is billed as the “the first completely 3D-printed, ready-to-wear, item of clothing.” The high-tech bikini’s name is derived from “nylon 12”, the material that’s used in the 3D printing process. 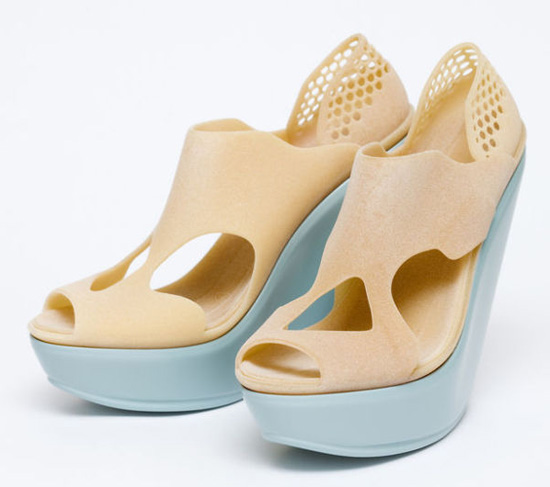 18.) Hoon Chung, a student at the London College of Fashion, has designed a collection of 3D-printed shoes that he hopes will rock the fashion world.

Another 3D printer that was all the rage at the Consumer Electronics Show in Las Vegas that I attended last month, was Cubify’s consumer-targeted desktop printer called Cube that is cheap enough for home use (retails for around $1200).

Once a person’s feet are scanned in, the printer can be used to create a custom-fit shoe that is styled and colored to your exact preferences.

People are social creatures by nature and while the online world has dealt a temporary setback to traditional retailers, a new breed of unusual stores filled with hyper-individualized experiences is starting to enter the marketplace.

Where many commodity items such as books and music are better delivered in digital form online, other products will find ways to differentiate themselves through instant status-fixes, group learning experiences, relationship building opportunities, and much more.

When it comes to retail, consumers are in control. They vote with their dollar when they decide what to buy, where to buy, when to buy, and how much they’re willing or can afford to pay.

In our connected world, where information is ﬂuid and transparent, retailers must become actively engaged in the global conversation. If not, their customers will simply begin the conversations without them.

Physical stores currently still provide the best way to create a high-value relationship with customers and build a branded experience, but this could easily change over time. Although brick and mortar stores are not going away any time soon, the actual value they add to their communities as well as their appearance and interactivity levels plus the variety of products they offer will remain in transition for the foreseeable future.

19.) Starbucks Opens First-Ever Ski-Thru Coffee Shop – A Starbucks located at the Squaw Valley Ski Resort was built into the slopes at an elevation of 8,000 feet, allowing resort-goers to purchase a cup of Joe without ever having to remove their skis or snowboards.

20.) Nervous System is a design studio that works at the intersection of science, art, and technology. Their jewelry that was printed on a 3d printer exemplifies the current craze in 3D printer design and is testament to the fact that technology and craft are going a long way in partnership to make beautiful d’objects that wouldn’t otherwise exist in nature.