Rethinking the Court of Public Opinion 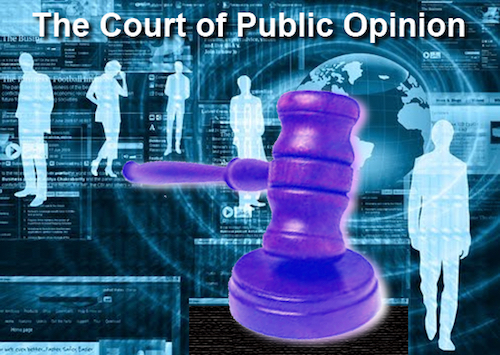 American TV personality Ryan Seacrest has a grim look on his face as he walks briskly across the stage. Turning to the camera, he pauses briefly before saying, “You have heard the arguments, listened to the experts, and seen the photos. But now it is up to you to decide the fate of Mr. Howard Cullens.”

On the lower part of the television screen a pair of voting numbers are listed, one to call for “guilty,” and the other to select “innocent.”

Mr. Seacrest continues, “For the good people of America, the decision you make here tonight will determine not only the outcome of this trial, but who we are as a people, as a society, and as a country. Do we have the resolve to make the hard choices, and more importantly, do we have the determination to make the right decision?”

People were drawn to this show because, as a trusted and impartial host, Ryan Seacrest adds just the right amount of charm and charisma to attract fair and objective people to judge his cases.

Concluding the broadcast, he ends with, “Tune in tomorrow morning on “American Courtroom,” and we will announce how the country voted in this trial, and whether Mr. Howard Cullens will remain a free man, or one who spends the rest of his life in prison.”

Would you trust your own fate to the collective whims of 50,000 “average people?” How about 5 million?

Would the combined weight of 5 million people voting “yes” or “no” give you more or less confidence in a justice system?

If a city, county, or country decided to crowdsource its jury decisions, what things would have to change?

As with all new ideas, it is be very easy to create a system like this that fails. Turning the courtroom into a primetime reality TV show may very likely be one of those recipes for disaster.

However, somewhere in the groundswell of ideas needed to make a system like this work is a repeatable formula that can perform well, with the outcome being a truer reflection of the will of the people.

Thinking through the options, a few of the necessary checks and balances might be:

Some of the reasons why this may be a better approach include:

The U.S. Constitution only mentioned three federal crimes by its citizens: treason, piracy and counterfeiting. According to a 2008 study by retired Louisiana State University law professor John Baker, the number of Federal Laws now exceeds 4,500.

Being tough on crime is a persona that voters are naturally attracted to. When someone looks you straight in the eye and says, “I’m here to protect you,” there is an instant bond that forms between the protector and the protectee.

As a result, many politicians have become protectionist zealots passing countless new laws to appease their constituents while, at the same time, micro-managing more and more freedoms out of our lives. Along with the additional laws come the necessary enforcement divisions, prosecution teams, judges, lawyers, prisons, and a cadre of investors who find unique ways to invest in companies that profit from the income streams being generated.

According to a recent article in the Wall Street Journal, many of these new federal statutes don’t require prosecutors to prove criminal intent, eroding a bedrock principle in English and American law. The absence of this provision, known as mens rea, a Latin term for “guilty mind,” makes prosecution far easier.

Not only is “ignorance of the law” no defense, neither is criminal intent.

A study last year by the Heritage Foundation and the National Association of Criminal Defense Lawyers analyzed scores of proposed and enacted new laws for nonviolent crimes in the 109th Congress of 2005 and 2006. It found of the 36 new crimes created, a quarter had no mens rea requirement and nearly 40% more had only a “weak” one. In addition, many of the new federal laws also set a lower bar for conviction than in the past

As federal, state, and local criminal statutes have mushroomed, and with the deck stacked in favor of the prosecutors, it has become increasingly easy for people to end up on the wrong side of the law.

Jury selection has become a refined science. Prosecutors and defense attorneys spend an inordinate amount of time trying to detect the exact mix of personalities that will lean a jury in their favor.

By opening up the jury pool to a wider audience, strong personalities will have no more influence than everyone else.

A court system run this way will be like applying the Wikipedia model to the courts. Rather than a top-down approach to court decisions, the pyramid is inverted and it becomes a bottom-up approach.

A prospective investor often looks at a new idea and asks the question, “How will this fail?”

An entrepreneur will usually look at it from a vastly different perspective asking the question, “How can I make this succeed?”

In the mind of an entrepreneur, nothing is static or fixed. Everything is changeable, reworkable, and no barrier is too big to overcome.

For me, it’s easy to see the advantages of a system like this. It’s also easy to envision the challenges of making something like this work.

Replacing our current system, a system that has become firmly entrenched in our society, will not happen easily. Change is always difficult.

However, there will be thousands of questions similar to the ones I’ve listed above, and every one can be addressed in a thoughtful manner.

As Lord Acton famously stated in 1887, “Power tends to corrupt, and absolute power corrupts absolutely.” The interesting end of the quote which is often left off concludes, “Great men are almost always bad men.”

Over time, the issues that courts will be dealing with will become increasingly cross-border disputes. International issues involving people from multiple nations and a spaghetti mess of intertwined laws, rules, and regulations.

Jurisdictional issues will further confound already complicated problems. A new system will be needed; one that transcends current boundaries yet still renders clear and concise resolutions.

The “court of public opinion” takes on a whole new meaning when over a million people weigh in from around the world to decide the outcome of a dispute between two large corporations. The proceedings from each court case will be broadcast live around the world.

A new global dispute-resolution system cannot possibly work within the confined thinking and limitations of today’s courts. So if a new system will be need then, why not begin the process of experimenting and implementing it now?