Living in an Age of Hyper-Awareness 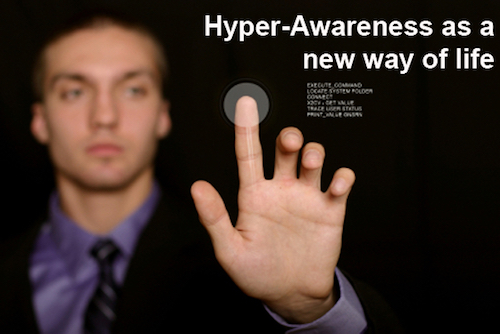 It’s amazing how a single newscast can set the world on fire.

The very second Standard & Poor’s announced they had downgraded the U.S. Credit rating, communications systems around the world began to boil. Reaction time was critical and those who could react the quickest were able to position the negative news into something less negative, perhaps even a positive.

Reaction was fast and furious. At the same time, over-reaction was even faster and furiouser. Few people were able to gauge the proper response to the events unfolding.

We have entered into a new age of hyper-awareness where reaction times have dropped from minutes to seconds, and in the case of computers that make trades based on mathematical models, the time is now measured in milliseconds.

This new level of awareness is still a crudely refined capability that we are only now beginning to understand.

The Secret Story Behind the First Tech Bubble

The original tech bubble began with Netscape in 1995. Their IPO was extremely successful as the stock price jumped from $28 to $71 on the first day, and ultimately cleared the way for hundreds more net companies to do IPO’s far earlier than ever before. A firm with $3 million in losses suddenly became worth $2 billion.

Jim Clark, Netscape’s co-founder had been advised strongly against going public, but went ahead anyway because he had to make payment on a mega-yacht he was having built. If he missed the payment, the builder would give his slot to someone else, and he wouldn’t get his yacht for years.

The bubble began to collapse in March 2000 when an article in Barron’s stated that many Internet companies were running out of cash at an alarming rate.

Few people realize one of the other key factors driving the bubble – Y2K.

In the late 1990s, hysteria was beginning to build around the calamity that Y2K would bring as a result of computer clocks not being able to properly switch over to the new millennia.

Tech people everywhere suddenly remade themselves into Y2K experts and people managing tech budgets quickly realized that anything presented to upper management that mentioned Y2K got instant approval. In a matter of months, managers around the world learned how to frame every request around Y2K and tech budgets mushroomed.

Companies around the world were freeing up record amounts of capital because no one wanted to get caught with their pants down.

When January 1, 2000 came and went with few notable incidents, the entire Y2K industry began to collapse, and along with it, the rest of the tech sector.

Companies no longer needed their larger-than-normal budgets for the annoying snot-nosed kids on the geek side of house and the Barron’s article simply gave upper management a reason to begin slashing budgets.

While certainly not the only reason, Y2K was a critical part of why the bubble collapsed. But in 2000, it collapsed over a matter of months, not hours.

Many of the theories arising in the late 1990s were not wrong. The timing was wrong but the underlying theories were sound. They were simply too far ahead of the curve.

Many of the same concepts that were used to launch failed companies over a decade ago, have been successfully reborn inside of today’s markets. The buzz-words of the 1990s included things like:

Certainly the language is different, and not all of these concepts still apply to today’s business environment. But each has provided a piece of foundational thinking needed to build our current crop of successful Internet companies.

Our increasingly dysfunctional above-ground job sectors have given rise to mushrooming underground economies operating inside the web. For every celebrity startup vying for VC money, hundreds of below-radar operations are making serious inroads, raking in hordes of cash. But they are doing it with very little startup money.

In spite of what some press stories are telling us, money for early-stage startups is nearly non-existent. Banks have stopped lending money to anyone without mega assets. Angel investors are running scared. And 70% of all Venture Capital firms have simply disappeared over the past 10 years, dropping from roughly 2,500 firms in 2000 to 750 today.

The only reliable source of money is still friends and family, but it usually only comes in small amounts.

Replacing many traditional VCs are a series of Micro VCs that have cropped up as a result of Amazon leasing server space at a nominal cost, eliminating the need for startups to buy their own server farms. We are also seeing an interesting trend towards hybrid incubators like Techstars and Lightbank that offer small amounts of funding along with mentorship and coaching.

In a normal downturn, every 100 people who have been laid off will result in 7 of them starting their own business. Without access to capital, the vast majority of those would-be entrepreneurs have turned to the web where startup costs can be measured in hundreds of dollars rather than hundreds of thousands of dollars.

More importantly, the employees these startup companies would have hired have been eliminated. They have figured out ways to operate as a one-person business, bring people on for short-term projects, and contract for services.

Once people learn how to run a super-lean one-person business, there’s no turning back. Jobs are not just temporarily eliminated, they are never coming back.

Because of our hyper-aware communication systems, one-person business owners are in close communication with others who think and act just like them.

The Downside of No-Fund Startups

Without any form of institutional funding for startups, governments are losing control of online commerce. That means no tax dollars, no regulatory authority, and no sense of what’s really going on inside these businesses.

There exists a pervasive notion that “since the system has failed them, they will not support the system.”

Above-ground economies such as store-front businesses are continually subject to the scrutiny and whims of local governments. The added hassle of dealing with planning and zoning departments, filing sales tax reports, and attending city council meetings is more than a mild inconvenience. It’s a total deal killer.

As a result of this combination of negatives, the brain-drain happening as people shift from the physical world to the digital world, is dealing a crippling blow to the talent pool and income streams left to run the country.

With the pervasiveness of smartphones and instant connectivity, we are living in a society that is jacked-in 24-7 to the world around us.

Talent is being discovered at an earlier age in remote parts of the world:

These types of discoveries are not isolated cases. They are happening with increased frequency all around the world.

Not only are we increasingly aware of the world around us, we are able to focus the frequency of our awareness to precisely the topics and industries we are most interested in.

Our inability to properly meter our response to this heightened level of awareness is exactly what’s driving today’s megavolatility on Wall Street.

Yes, there are high levels of fear, worries about a double-dip recession, uncertainties about Europe, and a dearth of political leadership. But all of these legitimate concerns stem from our inability to function within this new context – living in a hyper-aware society.

I’m certainly not suggesting we need to dumb-down our systems or we, as humans, are somehow incapable of living in a world with this level of awareness. Rather, it is the fine art of managing and leveraging these capabilities that we haven’t yet mastered.

So can we really tame the beast inside Wall Street simply by spending a few zen moments next to some guru of awareness? Probably not. However, by better understanding human characteristics and tendencies associated with living in a hyper-aware world, we should be able to craft new kinds of systems that lower volatility and perhaps even eliminate knee-jerk high-stress reactions to the news of the hour.

We have come a long ways since 1850 when Paul Reuters, founder of the Reuters News Service, set a new speed standard for delivering news between Brussels and Berlin by using carrier pigeons.

Hyper-awareness is here to stay. We cannot un-ring the bell or somehow roll back time.

Just because we have access to the information doesn’t mean we have good ways of interpreting it. Most of our thinking is a mile wide and an inch deep, with little ability to probe the depths of seriously complicated issues. Yet we are connected in a new and different way. So will our thinking ever change?

Our journey through life is an ongoing adventure and our ability to both understand the nuances of change and adapt to whatever life throws our direction is what makes this a magnificent time to be alive.

Every problem creates an opportunity, and there are currently tons of opportunities waiting to be mined.